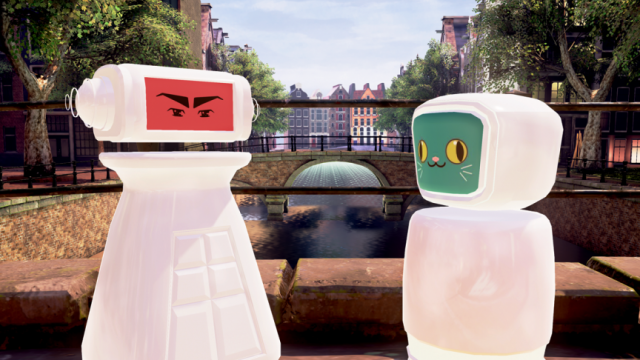 TimefireVR won “Best Social Media Experience” for “Hypatia at the Cinequest Film & VR Festival. Hypatia is a VR city created for social interaction within the VR space. This new realm in Hypatia was being created especially for Cinequest and catered to the attendees.

Hypatia has been in development for the past two years in Scottsdale, AZ with a team of around 30 artists and developers. Named after the ancient female Greek mathematician and philosopher, Hypatia is built to bring people together. This virtual world is a unique platform with an emphasis on the arts, culture, exploration, commerce, experiential learning, and entertainment.

Mettle SkyBox Studio (V1,V2) were an integral part in completing the groundbreaking VRX.

Tell us about Hypatia.

Hypatia the Virtual Reality Experience (VRX) , takes audiences through a curated tour of Hypatia, the world’s 1st city being built for virtual reality. Along the way viewers are introduced to Adam and Ava, the city’s original inhabitants. The idea was to create a fun virtual experience that would allow people to immerse themselves in this stunning new VR metropolis that TimefireVR is creating. We wanted to create a piece that was not only a beautiful, extraordinary journey, but also educated audiences about the virtual reality evolution that is at our doorstep. Hypatia is not a game, but a destination where people will be able to live, work and transform themselves into new lives. This can be a challenging thing to communicate, even to those already immersed in VR. When touring through Hypatia in the experience, one really gets a sense of the city’s potential.

How did you get involved in VR?

I come from a 2d production background working as a director, producer and writer, starting as an editor. For some reason, I began looking into VR and stumbled upon TimefireVR. I met with the visionary founder, John Wise, and after about a six hour conversation I was sold. Five months later I can say it’s been an incredible creative and learning experience. VR is going to be massive, and the opportunities for storytellers are just at the embryonic stage. VR means infinite possibilities. VR means brand new. Filmmaking is the love and passion of my life, and storytelling in VR is just another tool and form of expression – in addition to traditional 2d storytelling. It’s my humble opinion that all traditional storytellers should do themselves a favor and look into VR and AR, and if they find themselves interested, stake their claims.

“I find SkyBox Studio V2 > Rotate Sphere is an effective way to direct the audience’s focal point, or gaze.”

What does it mean to you, to get awarded “Best Social Media Experience” by Cinequest?

Here at TimefireVR we believe that social virtual reality will drive mainstream VR adoption much like social media did for the internet. We’re working hard to make Hypatia the leading platform towards that end. Hypatia will allow people from all over the world to come together to live, play, conduct commerce, fully integrated with our current, traditional world. Social VR will make us a more connected, compassionate society, as cultural barriers come tumbling down. Receiving Best Social Experience was because it means the judges recognized that Hypatia best demonstrated this capacity of virtual reality. Cinequest is not only one of the top film festivals in the world, but also a leader amongst technology-centered festivals. 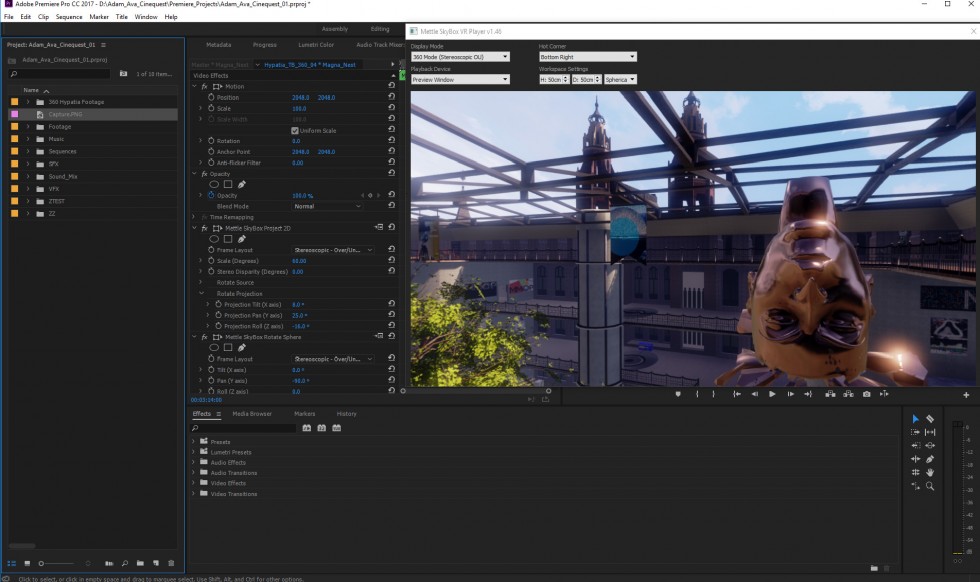 What was your workflow, from shooting through post-production? What other software did you use – how did you create the city itself?

Ah, the workflow, yes. This was a moving target in the beginning, and still is on a lesser level. My Supervising Technical Director, Kyle Marshall, and I had to machete our way through the workflow jungle for a bit until we had a relatively smooth path. It was a blast! The entire VRX was created in Unreal Sequencer, then Kyle would magically export what I made into full stereoscopic 360 footage using mostly 5-15 computer render farms. The proprietary 360 render process developed by Kyle was inspired by Ninja Theory’s Hellblade: Senua’s Sacrifice VRX . The footage was then edited with Adobe’s Creative Suite, using primarily Premiere Pro with SkyBox 360/VR Tools. I used Skybox Studio V2, Project 2d for all of the credits and text, Rotate Sphere to direct the audience’s focal point for each shot, and Skybox VR Player to watch and review my editing. I found the Skybox VR Player to be more stable than Premiere’s proprietary 360 viewer when working with Skybox plug-ins. The actual city of Hypatia is being created by 30+ artists and programmers here at TimefireVR using a wide variety of programs,including Unreal Engine, Blender, Krita, MakeHuman, Touch Designer, Bitwig, Substance Designer, Substance, Painter and Granite. There are likely a few more, but that cover’s the lion’s share.

“It is an honor to be recognized by an established and well respected film festival such as Cinequest,. TimefireVR and Cinequest share in the same vision of virtual reality, its impact on film and our everyday lives. TimefireVR is at the forefront of that movement with a focus on social interaction, entertainment and experiential learning. We look forward to participating at this year’s festival and invite everyone to experience Hypatia live.”

A vanguard organization set in the Silicon Valley, Cinequest’s uniqueness and impact result from being ahead of the curve in the powerful integration of creativity and technology. Cinequest fuses the world of the filmed arts with that of Silicon Valley’s innovation to empower youth, artists and innovators to create and connect – driving transformations and a better tomorrow. Cinequest does this through Cinequest Film & VR Festival, Picture The Possibilities by Cinequest and (our sister company) Cinequest Mavericks Studio.