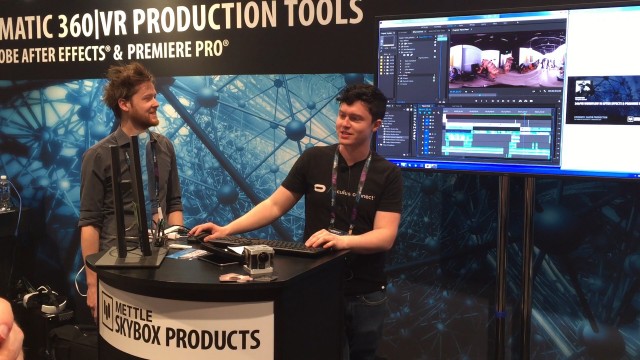 Connor Hair, Award winning VR Director and Co-Founder of the VR production company Perception Squared, explain their VR production process in Adobe After Effects and Premiere Pro. They use Mettle’s 360/VR plugins SkyBox Studio and SkyBox 360/VR Tools  to greatly speed up 360 workflow and adjust the focal point of each shot. Connor presents with Alex Meader, his Co-Founder at Perception Squared.

This talk is part of: Mettle showcases 360 VR Filmmakers at NAB.

How did you get into VR?

I originally was interested in VR because of VR gaming. After I tried the DK1 I saw a massive potential for storytelling within that medium and I decided to explore this interest.

What do you consider your most outstanding VR production?

I am most proud of our first VR film “Real”. It was largely an experiment to see if storytelling would work in VR. We made the film on very limited resources with a lot of blood sweat and tears but we are all really proud of the final product. The emotional connection we created between the characters and the audience was strong and I would really like to explore this human connection in a virtual space more in future films.

Written (with contribution by Alex Meader) and directed by Connor Hair. Produced by Alex Meader. “Real”, was selected to be part of Kaleidoscopes 2016 World Tour and screened in 10 cities across the world. “Real” was his their venture into virtual reality filmmaking and was an experiment in telling stories in this new medium.

What is your favorite camera system and software?

I feel like the only thing that stays somewhat constant in VR filmmaking is the software. We use the Adobe CC suite and Mettle’s software for After Effects and Premiere for the majority of our post on VR films. Our camera system changes monthly but at the moment we are shooting on a custom 4x Gopro Hero4 black rig with 220 Entaniya Lenses.

I think as VR evolves and grows it will become something that has the power to make you completely forget where you are every time you use it. I think great films can also grab you so much that you forget you are in a movie theater. I’m interested in combining aspects of both art forms to create cinematic VR experiences that you can completely lose yourself in.

Where do you think VR is going?

I think VR has the power to integrate into everyone’s lives. I think at the moment it is in its infancy but as things grow it will eventually be the same as owning a television. It will be a different experience than television’s or 2D computer gaming and won’t replace either but I believe eventually it will be something that everyone will want to own.

Selected as a Winner of Samsung’s “There in 60 seconds” VR contest. It won $10,000 and was screened at Sundance Film Festival.

Connor Hair is an award winning writer, director and cinematographer. After working as a cinematographer on six feature length projects, Connor shifted his focus toward directing virtual reality experiences. His in depth knowledge of camera technology and prior experience directing allowed for a confident transition into this new artform.

Connor is constantly experimenting with emerging technology and has a passion for telling stories in unique and innovative ways.

Alex Meader is an award winning writer and director who has been telling stories across many different mediums for almost a decade. His body of work includes feature films, short films, TV Commercials, branded content, music videos, and virtual reality.  Meader directed his first feature “5th Street” in 2012. After touring the festival circuit “5th Street” was purchased for distribution and released in 2013.

Over the last two years, Meader has been focusing his attention on the realm of virtual reality and the immense potential it has for storytelling.