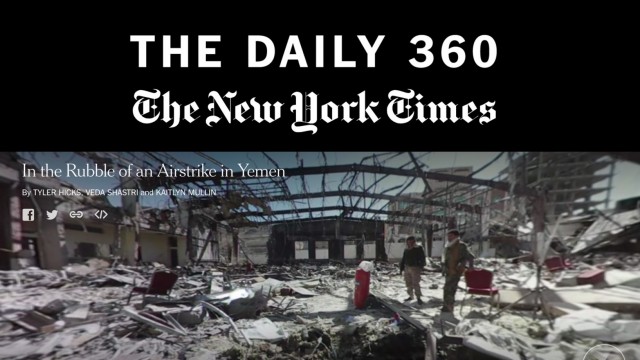 The New York Times continues to grow its virtual reality offerings by launching The Daily 360, a daily series of 360-degree videos, introduced the 1st of November. As explained in their introductory post, “360 videos offer a new way to experience the journalism of The New York Times. These immersive videos put you at the center of the scene, allowing you to look left, right, up, down and behind you. You can experience 360 videos on your phone, tablet, or computer — no headset needed. Times journalists around the world will bring you one new 360 video every day: a feature we call The Daily 360.” We are honoured that Mettle 360/VR plugins are used in the post-production,.

For The Daily 360, the Times is partnering with Samsung, which gave the Times the equipment to produce the videos. In a note at the bottom of its introductory post, the Times wrote, “Times journalists have been provided with Samsung Gear 360 cameras and equipment to use while reporting out in the field,” and the credits of the initial video also identify that the technology came from the company. Samsung will also publish The Daily 360 videos on its own platforms.

In The Rubble of an Airstrike in Yemen

The first video is a minute-long look inside the rubble of a social hall in Sana, Yemen that was destroyed in a Saudi airstrike.

Where Can You Watch The Daily 360?

Desktop: Find The Daily 360 on your computer at nytimes.com/thedaily360. Click the video to begin playing. Then, click and drag your mouse around the video to explore your surroundings.

Phone: If you have an iPhone or Android phone, find The Daily 360 at nytimes.com/thedaily360 or in the NYTimes app. Tap the video to begin playing. To explore your surroundings, move your phone around or swipe your finger left and right over the screen. If you don’t have the app, download it here: iPhone | Android

Tablet: Navigate to nytimes.com/thedaily360. Tap the video to begin playing. Move your tablet around or swipe your finger to see more. 360 videos do not currently appear in NYTimes tablet apps.