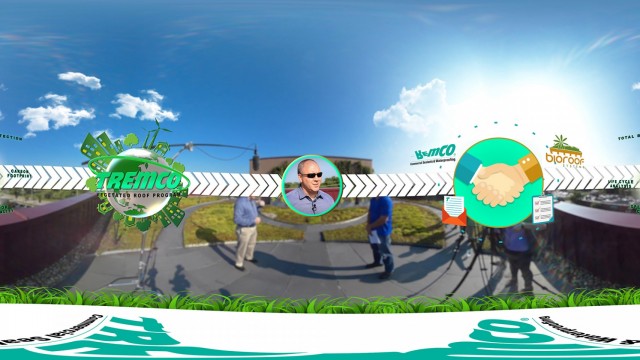 Nick Fiorella, Video Editor/VR Editor at Tremco CS&W, produced a 360 video experience to help drive sales of the company’s vegetated roof system. Roof-top gardens are a growing trend, and 360/VR is a great way to let viewers experience them from any location. Drawing some inspiration from a popular 360 video of Michelle Obama, the Tremco team used Mettle 360/VR plugins in their production pipeline.

“Virtual  and Augmented Reality will push the Commercial Construction industry to new heights. I am super excited to continue driving the development of this new tool in our industry. See you on the virtual job-site!”

Please tell us about the project. What were the objectives?

Tremco CS&W launched its Vegetated Roof Program this past year. The objective of the video is to create awareness about the energy savings and efficiency of having a Vegetated Roof. The cost-saving to the building owner are huge. Tremco would also like to make customers aware of the vegetated roof systems they offer. Customers are building owners and contractors.

Why did you choose 360 video versus regular video?

Utilizing 360 video allows the viewer to actually feel like they are standing on the vegetated roof. This of course made for a much more immersive experience and it also showed that Tremco is a forward thinking innovative company, using 360 video for marketing materials. 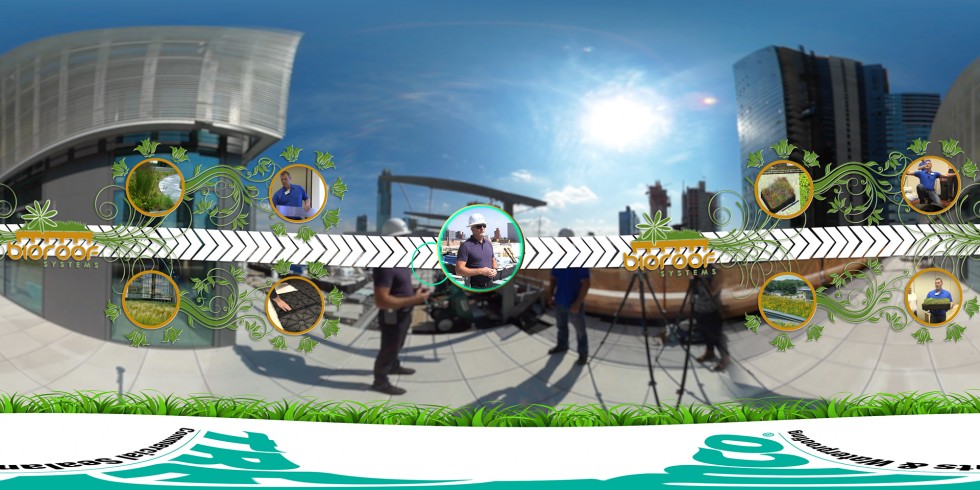 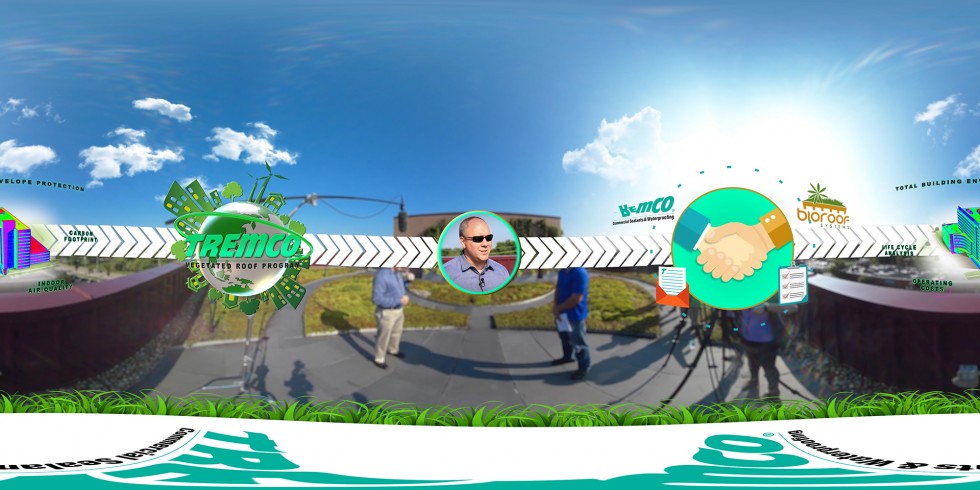 Tell us about your studio. How are you set up? What is it like to work in-house?

Our studio is more of a corporate office actually.  There are two people on the team, me and Elise Bigley. You can see her operating the camera in the interviews. Working in-house at a company like Tremco is great. They really take our creative ideas into consideration, and work with us to realize them, as in this 360 video. They are also a large company and are willing to invest in us, as we expand our VR capabilities.

Where is this meant to be seen? At trade shows?

It is meant to drive traffic on social media and viewed at trade-shows with google cardboard or our Oculus Rift. There has been a very positive response from this approach. 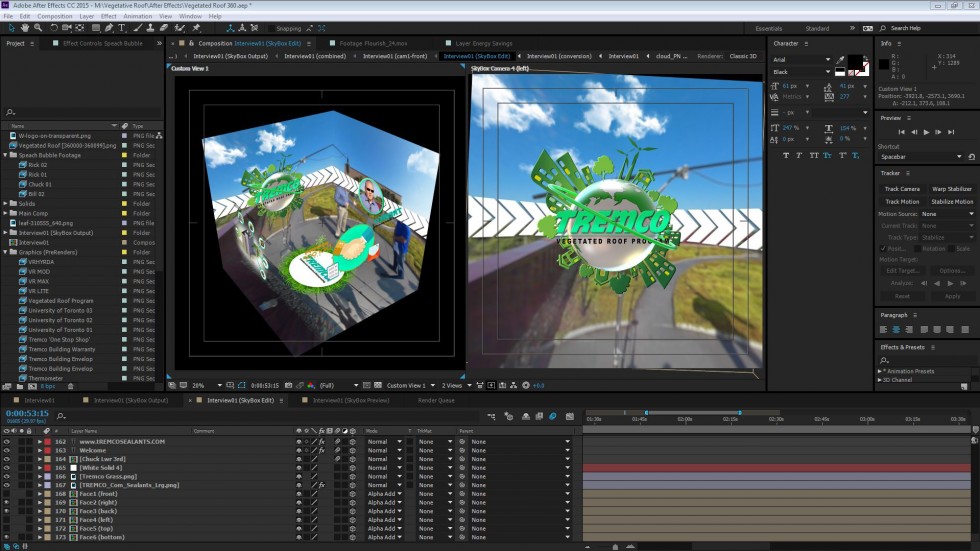 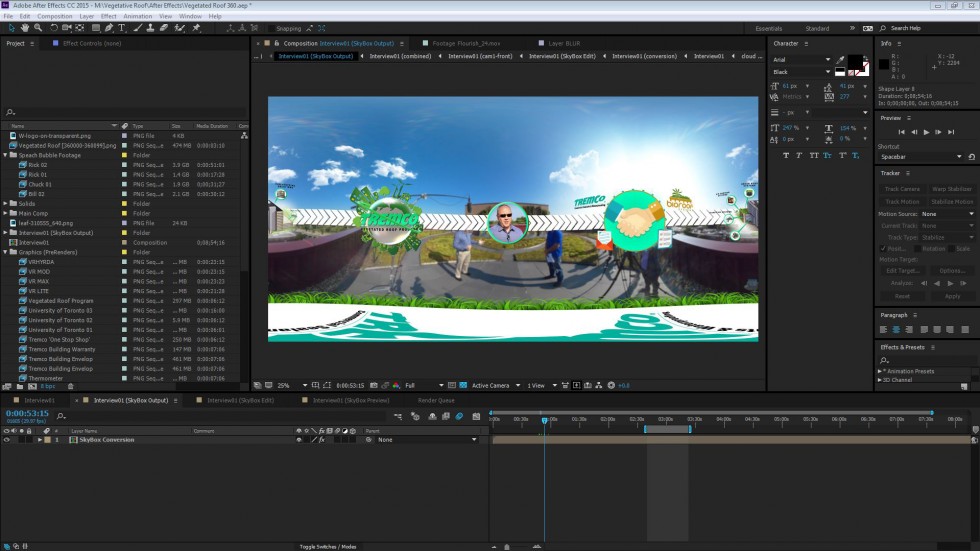 What is your production pipeline, from concept through rendered 360 video?

As far as the production pipeline, I set up the 360 camera while we set up our normal film shoot. I did the interviews also, as the cameras recorded. I took that footage into After Effects after stitching it together. I then created all the motion graphics in After Effects and 3ds Max. I placed them using the Mettle SkyBox Studio plug-in. I exported the motion graphics and video separately out of After Effects. I imported those layers into Premiere Pro, put them together with SkyBox 360/VR Tools, and did all the sound design work. I didn’t have time to do the spacial audio, so I did the best I could with left and right channels. Finally, I exported out of Premiere Pro, injected the 360 meta data and uploaded it to YouTube.

What software and hardware did you use?

How did you discover Mettle 360/VR Plugins?

I found them online while doing research for VR. The Mettle plugins set up the production pipeline in After Effects and Premiere Pro, making it very intuitive for me to work, so I could focus on creating. I already knew my way around Adobe software and 3ds Max, so this just took it one step further. It helps when you’re shooting 360, to understand the whole process of what happens in Post. I also used the SkyBox VR Player to preview the compositions and timeline through Oculus RIFT, directly in After Effects and Premiere Pro, which was a huge time-saver.

Well done. Thanks for using our software in your production pipeline! – Mettle 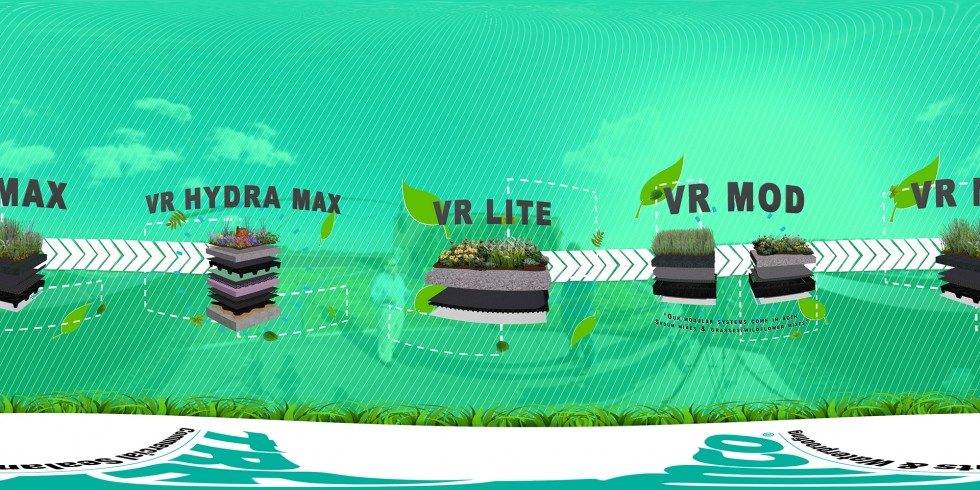