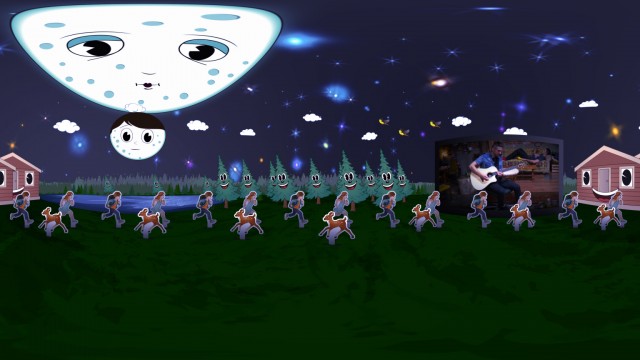 “You Can Be You” by Saint Motel | Atlantic Records

When the team at VanityFX was contracted to create Saint Motel’s “360 Virtualizer” for the song “You Can Be You” as part of the new album saintmotelevision, they took it as a unique opportunity to create a living, explorable world with a story to tell.

Skybox Studio 360/VR plugin for Adobe After Effects was a cornerstone of their development process.

“You Can Be You” by Saint Motel

How did you come up with the concept? Did you work with the band?

We started by speaking with the band, Saint Motel, about the high concept of the piece. They wanted to reflect a spirit of nostalgic, carefree innocence, but with a bit of an edge. They also wanted the video to take place in a summer camp, so we ran with that idea. The band sent us a series of nearly sepia-toned photographs of children at a summer camp as reference materials.

Picking a theme that was innocent, but edgy, was tricky. We examined the band’s previous videos and saw that they typically aimed for a retrofuturist vibe. One particular flavor of “retro” they hadn’t used yet turned out to be the perfect fit: 1930s animation.

1930s animation can be downright eerie. The huge eyes, the noodle-arms on the human characters, and the fact that a lot of film from that era is badly damaged gives 1930s animation a ghostly feeling in spite of its innocence. We mixed in influences from other eras (especially the 50s) where it seemed appropriate, but overall, we aimed for the 30s.

Starting the video in that kind of world would have been much too over-the-top, so we decided to make it a surprise. The video would open with the world in a relatively normal state, but things would become progressively crazier over the course of the song.

We wanted to give viewers a lot to look at in every direction, and for viewers who were particularly observant, we wanted to provide a coherent story to follow—some unifying idea that would provide a sensible reason for the transformations happening everywhere. As a company, we examined our own memories of summer camp: exploring the forest, swimming in the lake, and more. The strongest and most enduring memory was of a first kiss.

It’s a great message – you can be yourself but you’ll always be mine. Eternal accepting love. What visual message did the band want to get out there?

The directive we received was more about tone than specific visual messages, but we did try to run with the themes in the lyrics when developing the video’s story. Fortunately, the band was very supportive of our ideas. The video has a lot of thematically relevant secrets to discover in every direction. The full story is told in many ways and many places. We left a few elements up to the viewer’s interpretation, but in our minds, every part of the video supports the central themes. 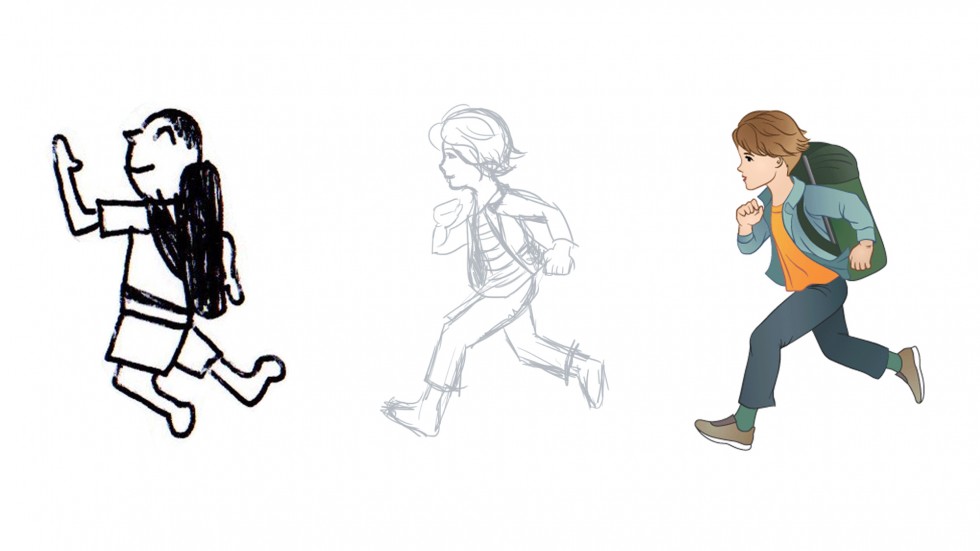 You created all the visuals as “flat” elements, and built out your 360 scene in After Effects. Why did you choose this technique?

Making the video a 360° presentation was the band’s plan from the start, so when we settled on the 1930s theme, this technique became the best fit. Our company also has extensive 2D animation experience, so we knew we’d be able to execute the idea efficiently and effectively.

Please give an overview of your production pipeline – from concept through uploading to youtube.

The management team created placeholder art assets. These assets were used as examples for the art team to follow. The placeholder assets were also used by the 3D animation team to build a rough version of the environment.

As art was completed, it was delivered to the band and record label for approval. When a piece of art was approved, the 2D animation team animated it (if needed).

Completed, animated 2D art was integrated into the 360° scene by the 3D animation team. When a complete draft of the video was ready, it was delivered to the band and record label via YouTube for review. The workflow for revisions was the same as the regular development workflow. 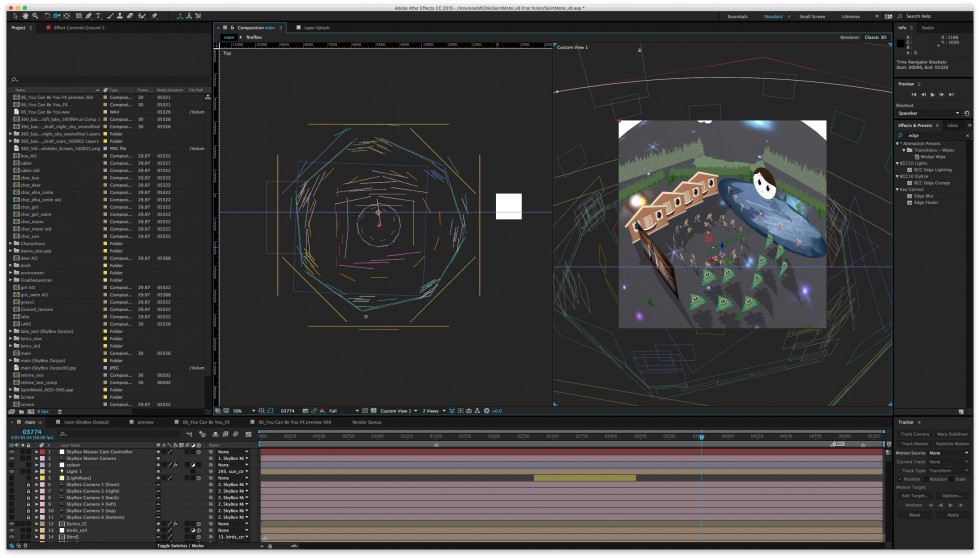 What did you learn about 360 video production from this project? What is like creating 360 video vs. traditional video? Any tips for other 360 content creators?

Before we started production on this video, we expected it to be the equivalent of developing 6 fully animated regular videos (up, down, north, south, east, and west). What we found, however, was that creating story-based, fully-animated 360° videos is more like software development than video development.

The reality is, 360° videos are a nonlinear medium. No two viewers will ever be focusing on exactly the same thing at exactly the same time, so reviewing a 360° video is more like QA testing an app than watching a regular movie. You need eyes on every inch of the screen throughout to get a true picture of how an audience will experience it.

Our advice to 360° content creators who want to tell a story through animation is, set up your teams, schedules, and reviewing process as if you’re creating software. Be prepared to spend more time than you expect on the project, because if you’re used to creating regular videos your expectations for what’s required may be categorically different than what you really need.

What hardware and software did you use?

Thanks Vanity FX, for sharing your workflow and chatting with us. 🙂 – Mettle 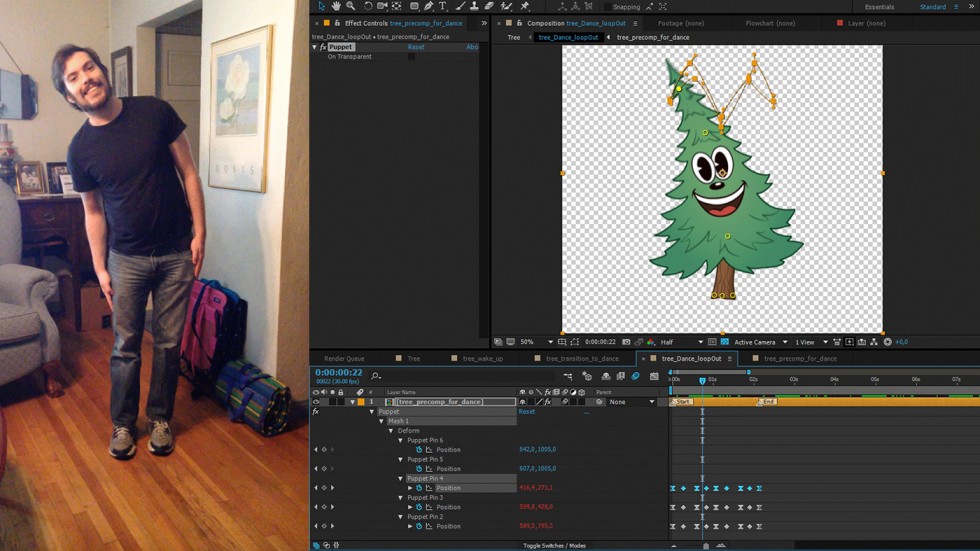 A person from any walk of life can conceive a powerful story. Sometimes, a powerful story comes from first-time independent filmmakers; sometimes, it comes from a large-scale veteran production company. At VanityFX, our streamlined development process has allowed us to accommodate both camps, and all the camps in between. Our team of developers, drawn from a wide variety of technical and artistic backgrounds, has been overjoyed at the opportunity to enhance stories in feature films and hundreds of commercials, some big, some small, and all deserving!