Triangulaire produced a fundraising 360/VR experience that includes a 360 short film, a kiosk for the film with HMD’s and a website, for their client Action Contre la Faim (ACF or Action Against Hunger). Bangui l’Oubliée (Bangui the Forgotten), is the 360 short film that transports viewers to the heart of a paediatric hospital in Bangui, capital city of the Central African Republic. It’s a compelling journey that brings potential donors on location to see how the NGO is using donations to combat malnutrition and effect change. A powerful and moving experience, Bangui-loubliee.com was site of the day on FWA, and recognized by Awwwards. We are honored that Mettle SkyBox Studio, 360/VR plugin for After Effects was used in the 360 production pipeline.

Goals of your project. What you set out to do.

Bangui l’oubliée is a VR film coupled with an interactive experience. This allows the viewer to discover the day-to-day operations of Action contre la Faim (ACF) in the Central African Republic, by visiting a pediatric hospital in Bangui.

ACF raises a large part of their donations by street-marketing, through spontaneous donations. It’s the first time that VR is used for fund-raising in France. Other NGO’s have created 360 videos, which have had a positive impact on total donations raised.

We want to do more than simple educate the public. We want to partner with them long-term, with future 360 experiences documenting how the donations are being used on-site.

What is your workflow process, from organizing your project, to shooting (camera equipment, hardware etc).

For this project, we were in charge of all phases of production, from concept through post-production.  Some of our team went on location to Bangui, in the Central African Republic, for 6 weeks with 6 GoPros and a 360 rig.

One problem was the heat. GoPros don’t like 100 degree heat, and their batteries drained very quickly. Another challenge was having no access to electricity during the day, so we had to pack more batteries than usual. What made it easier was the locals and ACF personnel – they were very accomodating during our shoot.

What was your post-production process?

For the post-production, we did all the stitching with Videostitch. The next step was importing everything into After Effects, where we used SkyBox Studio for a first edit to present to the client. Once we got an approval, we went ahead and used the SkyBox Studio in a few different ways:

• we used it to get rid of the tripod, fix some bad stitching., since it was really easy to work with Equirectangular footage thanks to Mettle plugins.

• we were also able to replace the sky with some HDRI maps, and added some optical flares.

• finally, we used Mettle to add all the text and logos into the film. 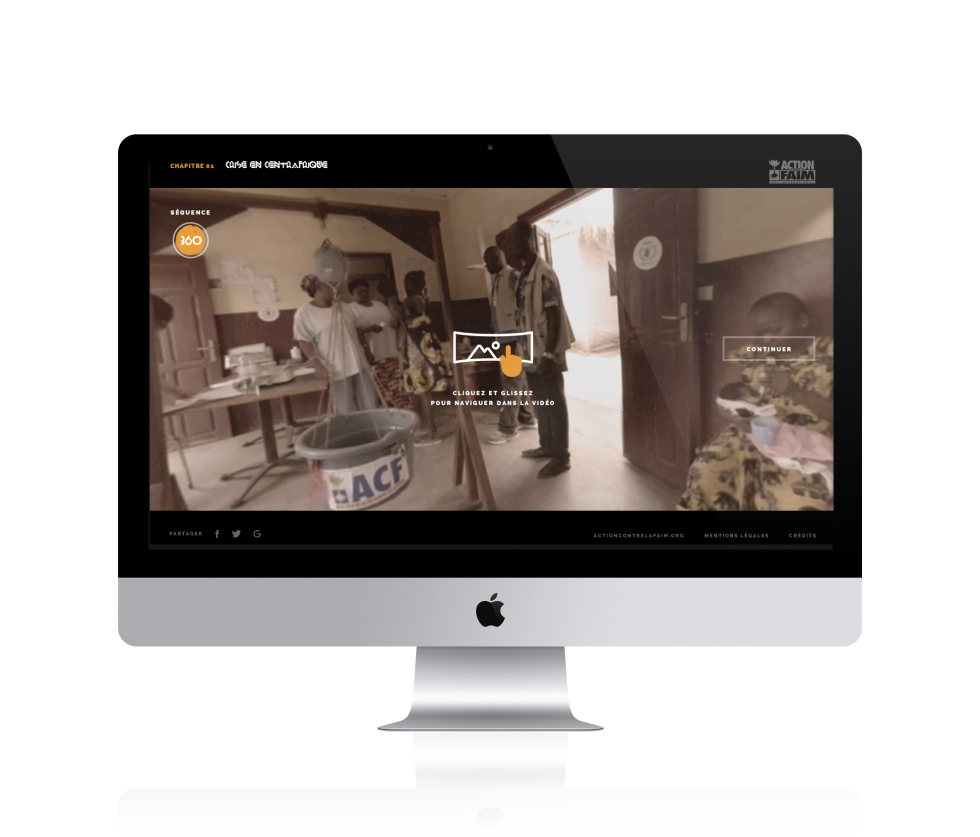 How to donate to Action contre la FAIM

Triangulaire is a multidisciplinary production studio, working with agencies and advertisers on their projects. Based in Paris since 2012, they specializes in digital productions and are regularly involved in humanitarian/social projects: for Unicef, Red Cross, Secours Populaire, ADIE, Odyssea, FDJ Foundation, and others. Follow them on Twitter. Facebook.