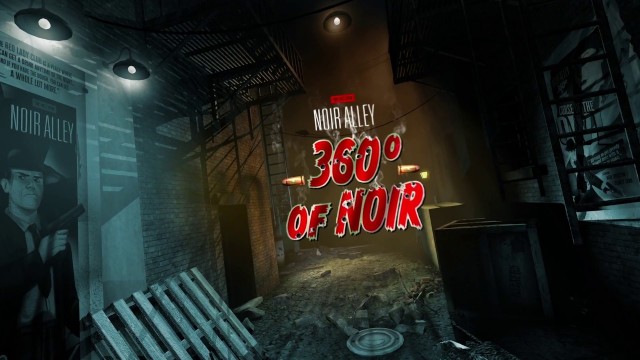 When Turner Classic Movies chose to broaden their fan base for Film Noir, they decided to partner with the design team at Sprocket Creative to create a 7-episode 360° Whodunnit.

Utilizing 360° technology available on desktop and VR devices, TCM brings fans a new virtual experience and digital exclusive entitled “Noir Alley: 360° of Noir”. The seven-episode online feature gives fans the opportunity to immerse themselves even further into the dark and gritty world of Film Noir with a new, original story of kidnap and murder. Fans can search for clues, meet new characters and try to figure out who the culprit is in this new branded digital experience available on tcm.com/noiralley.

The “360° of Noir”  Production time moved from 4 weeks per episode to one week for the final episode, due in large part to the original SkyBox Suite of plugins for After Effects and Premiere Pro, which are now part of CC 2018.

To give the Graphic Novel feel to the episodes, the team dove into their motion design and illustration backgrounds and used the tools they were most familiar with. The production pipeline included After Effects, Premiere Pro, Audio in Pro Tools, Daz 3D models, R19 Cinema 4D, Adobe Character Animator, VideoCopilot Element 3D, Trapcode Particular and Form, and of course the original Mettle SkyBox Suite.

The Noir Alley 360° series is being shown at several locations that are part of a “Noir City” film convention. It will also be shown in April at the “TCM Classic Film Festival 2018“.  TCM is thrilled with the results so far and has had great feedback from TCM Film Noir viewers. 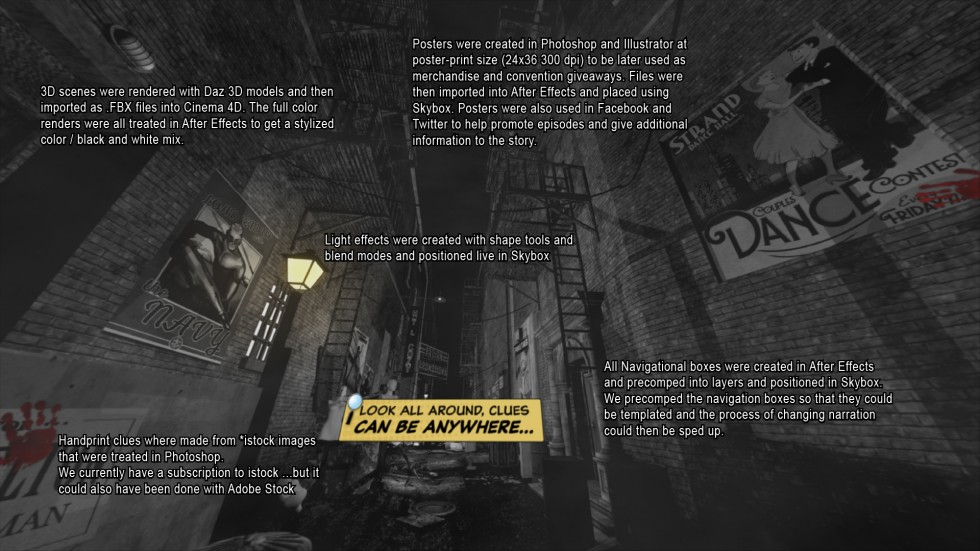 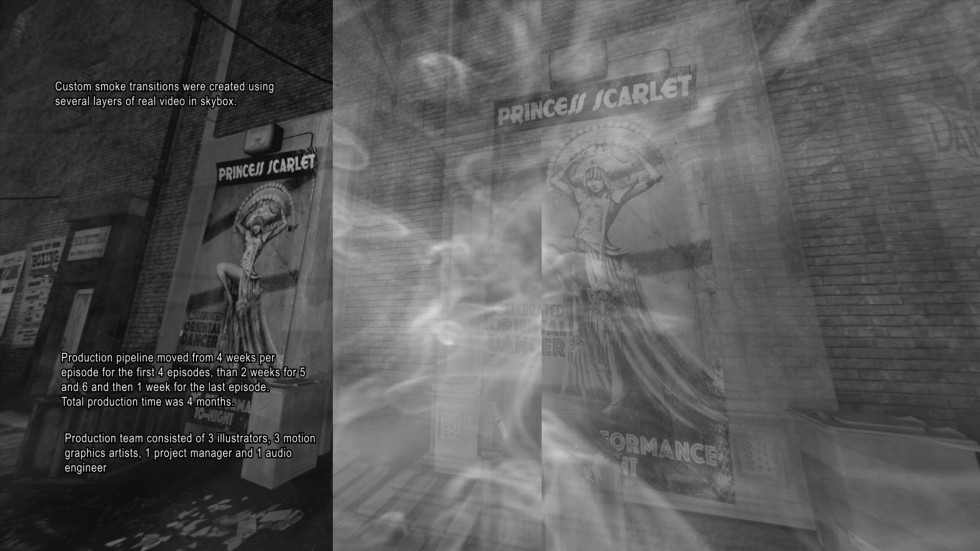 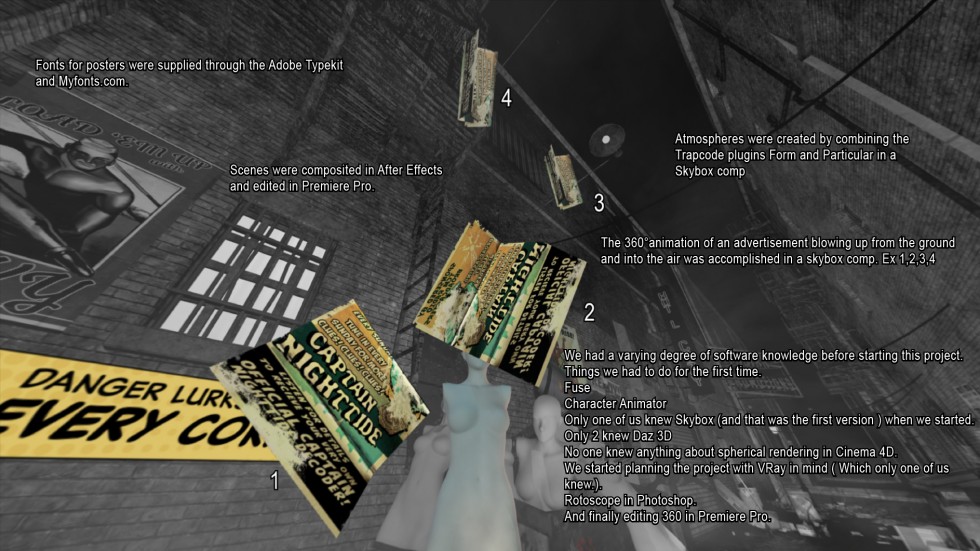 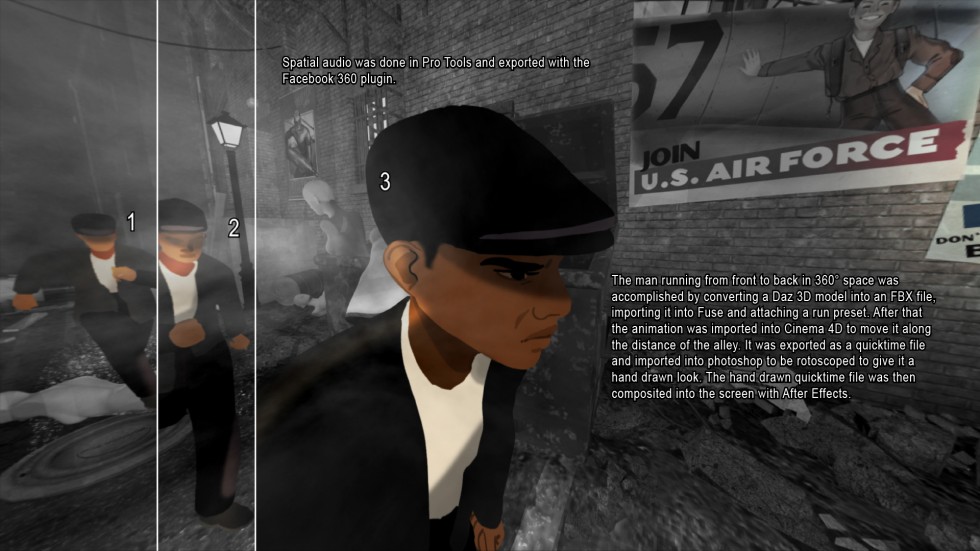 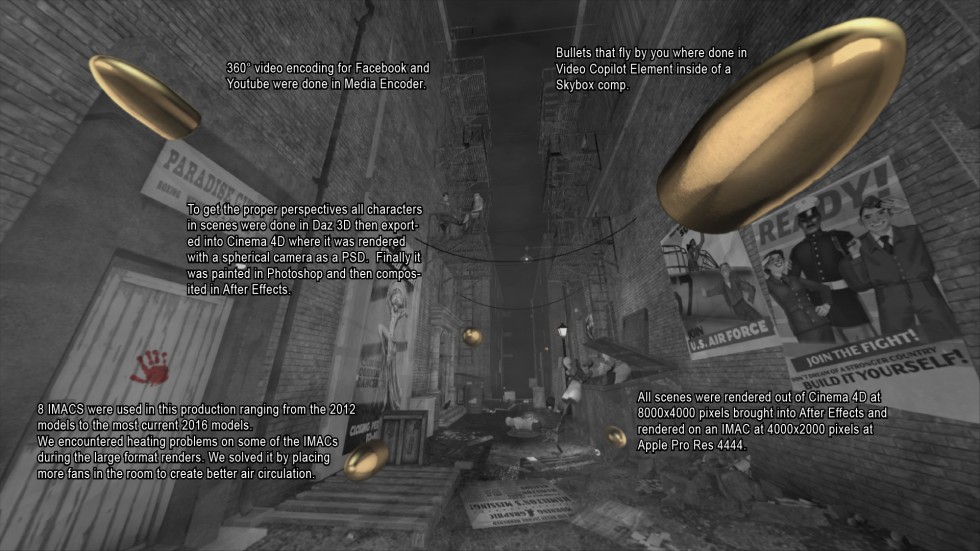 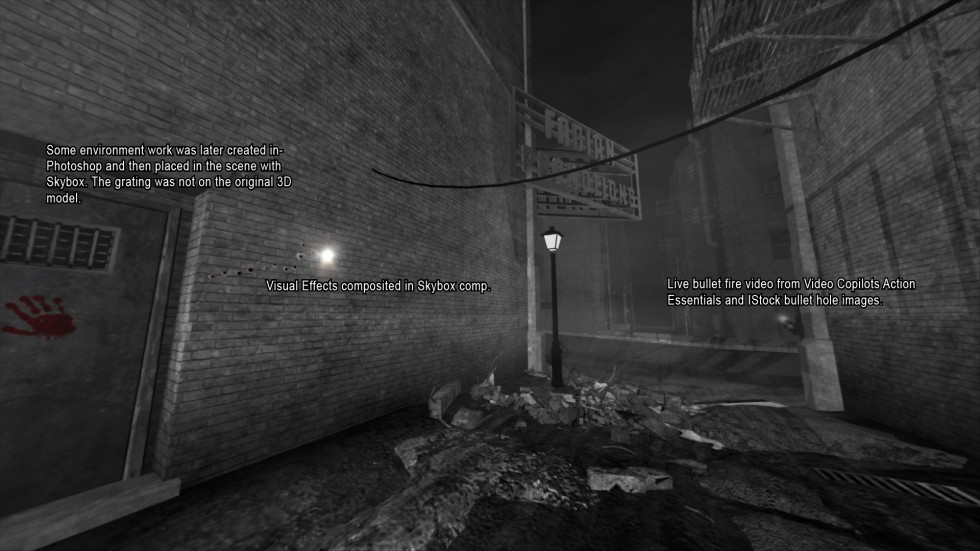 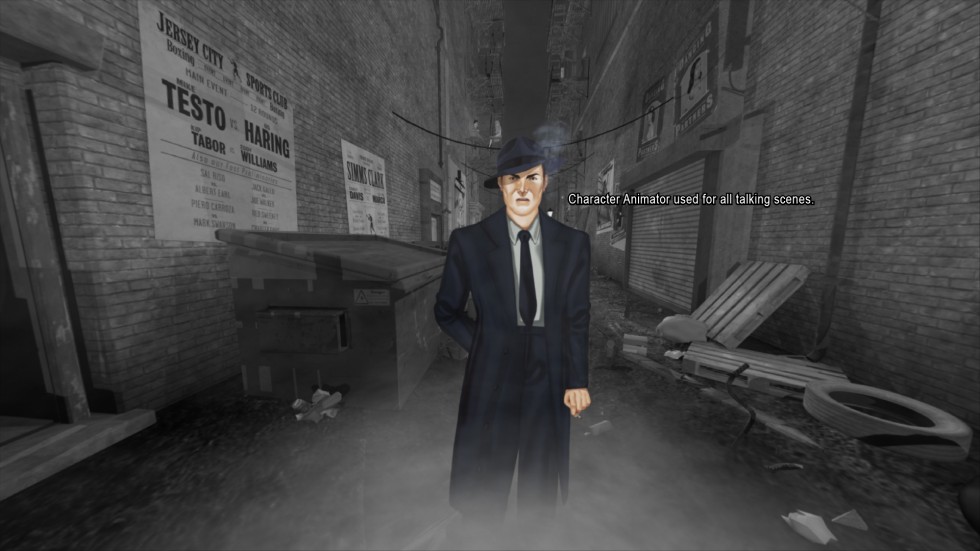 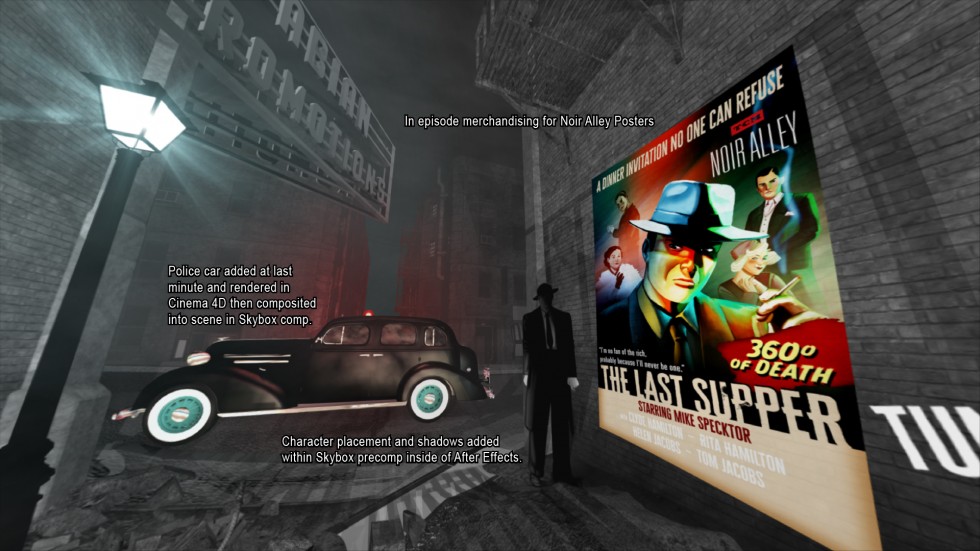 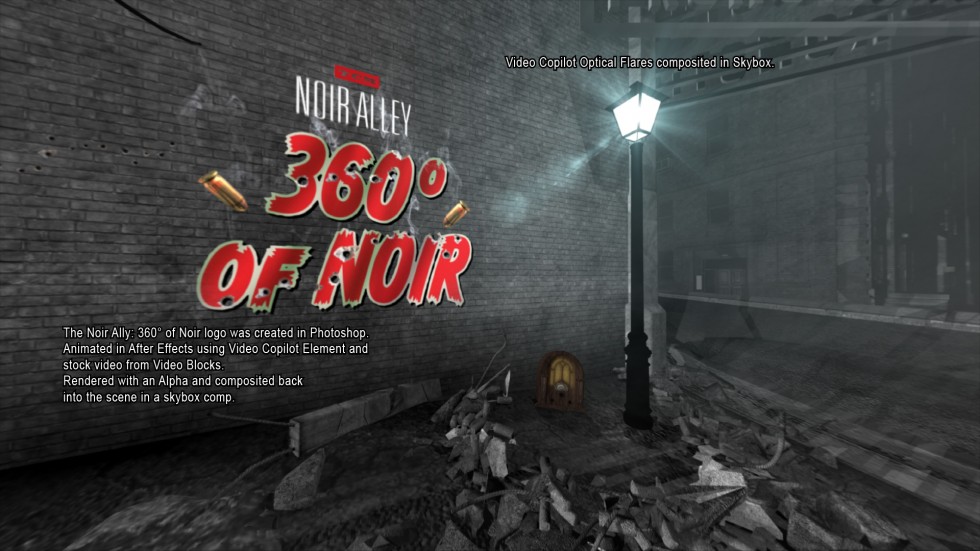 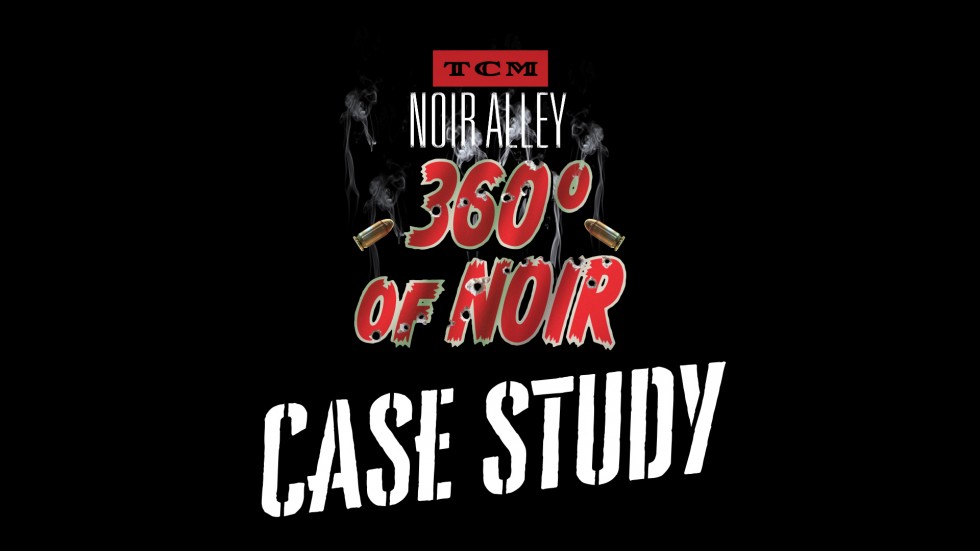 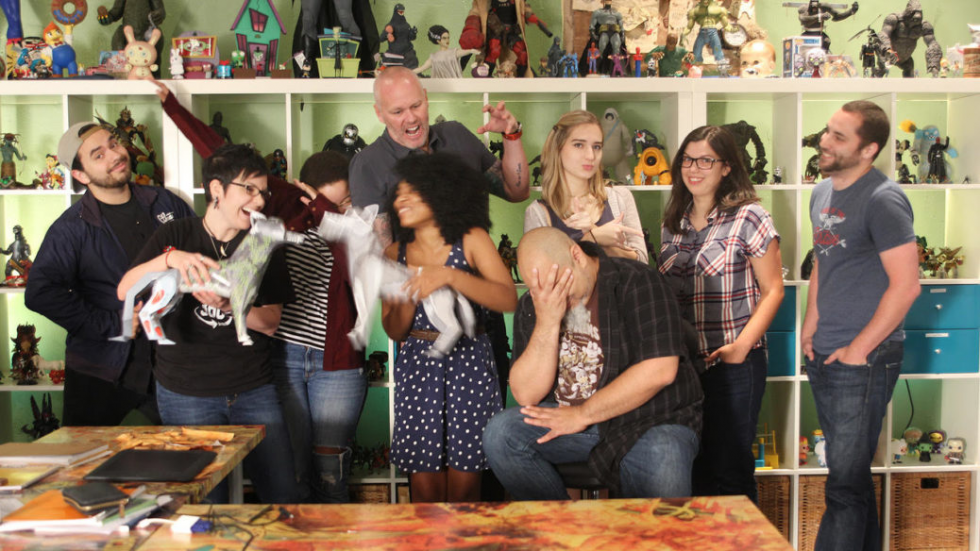 Sprocket Creative is a design-centric agency hell-bent on creating emotionally-driven stories that are worth watching. Since their beginning, they’ve only had one rule: make everything awesome. Because anything less would be unacceptable. The “360° of Noir” series was written, directed and edited by Dean Velez, Creative Director and Partner at Sprocket.

Turner Classic Movies (TCM) is a two-time Peabody Award-winning network that presents great films, uncut and commercial-free, from the largest film libraries in the world highlighting the entire spectrum of film history. TCM features the insights from Primetime host Ben Mankiewicz and Saturday daytime host Tiffany Vazquez, plus interviews with a wide range of special guests and serves as the ultimate movie lover destination. Currently, in its 23rd year as a leading authority in classic film, TCM offers critically acclaimed series like The Essentials, along with annual programming events like 31 Days of Oscar® in February and Summer Under the Stars in August. TCM also directly connects with movie fans through events as the annual TCM Classic Film Festival in Hollywood, the TCM Big Screen Classics series in partnership with Fathom Events, as well as through the TCM Classic Film Tour in New York City and Los Angeles.

In addition, TCM produces a wide range of media about classic film, including books and DVDs, and hosts a wealth of material online at tcm.com and through the Watch TCM mobile app. TCM is a division of Turner, Time Warner Company, is a global entertainment, sports and news company that creates premium content and delivers exceptional experiences to fans whenever and wherever they consume content. These efforts are fueled by data-driven insights and industry-leading technology. Turner owns and operates some of the most valuable brands in the world, including Adult Swim, Bleacher Report, Boomerang, Cartoon Network, CNN, ELEAGUE, FilmStruck, Great Big Story, HLN, iStreamPlanet, Super Deluxe, TBS, Turner Classic Movies (TCM), TNT, truTV and Turner Sports.