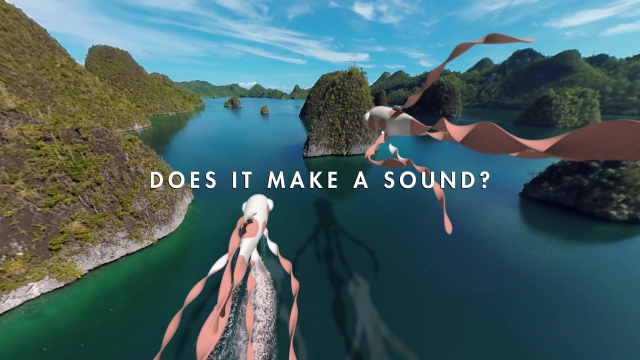 Does It Make A Sound | 360 Title Sequence for Semi-Permanent

Does It Make a Sound was created by the Australian-based animation studio Poke The Bear. The title sequence for the prestigious Semi-Permanent conference in Sidney was made using Getty royalty-free 360 stock footage combined with CG character animations. All post-production was done with Adobe software and Mettle SkyBox Suite* of 360/VR plugins.

*Skybox 360/VR Plug-ins have been acquired by Adobe and will be integrated into After Effects and Premiere by the end of 2017. They are available now for free if you’re an Adobe Creative Cloud subscriber. Find out more here.

Does It Make A Sound | 360 Title Sequence for Semi-Permanent

Q&A with Guy Jamieson, Company Director at Poke The Bear

Semi-Permanent is a very prestigious conference in Sydney. How did Poke the Bear get this 360 video gig?

Semi-Permanent hooks up with creative agencies each year and Poke The Bear is actually a pretty fresh studio. My last studio, The Magnificent Itch, was just closing down and they found me in relation to that name. I had a good chat with them about what I’m doing with Poke The Bear and my story really gelled with what Semi-Permanent is about.

Ever since I started my first animation studio I really wanted to start pushing my creative endeavors towards developing long form animation. The film making and animation talent that comes out of Australia is amazing. We’ve always produced top shelf animation and effects for Hollywood, but have never really had consistent commercial success with our own films. I wanted to start working towards changing that, from the bottom up. So a couple of years ago I started a local Sydney Animation Production group where the aim is to teach animation creatives of Sydney how to go about conceptualizing their own animated concepts and developing them into ”pitchable” shows and movies.

I really had no idea what I was doing when it came to developing and selling an animated series or feature concept so I started inviting local successful series animation producers and creative directors in to talk to our enthusiastic group. We’ve had a great collection of speakers now and their talks are all online at animationsydney.com.au. We’re currently running fortnightly story telling development workshops.

Anyway, Semi-Permanent is all about community and they loved that I was too. The idea for the piece came together really quickly and it was based around finding your own artistic community to encourage and inspire your work; exactly what the Animation Production group and Semi-Permanent are doing.

It looks like you had a starting point with the Getty 360 royalty-free footage. How did that go?

The stock 360 footage that Getty had was great. All 4K. I was definitely after a particular type of flowing shot and we pretty much used every shot from Getty that was suitable in the final piece.

Because the camera moves in the footage were flowing in the same direction, it wasn’t hard to add in the keys for the camera move. Some shots were more of a pain than others and I’m sure I could have used a dedicated 3D tracking package for much better results, but I just didn’t have the time to experiment.

We think you did a great job! Tell us – what was the design objective of “Does It Make a Sound”.

The objective was to show off the Getty Images library. So we had to create a community-based narrative that worked with their 360 content. The original concept was to have 2D characters looking through this footage for other artists. At the end of the story these characters find other characters and they all have a big art party together.

Showing this narrative was going to be tricky without voice over or text on the screen, so I enlisted a copy writer, Jermaine Rowe, and he created the wonderful text. The Art Director Robertino Zambrano from Kapwa convinced me pretty early on that 3D characters would be an easier route than trying to animate 2D onto 360 footage. Robertino came up with the brilliant idea of flying through a portal into the next video. He also quickly figured out how to make it work in Mettle and created the text animation designs. 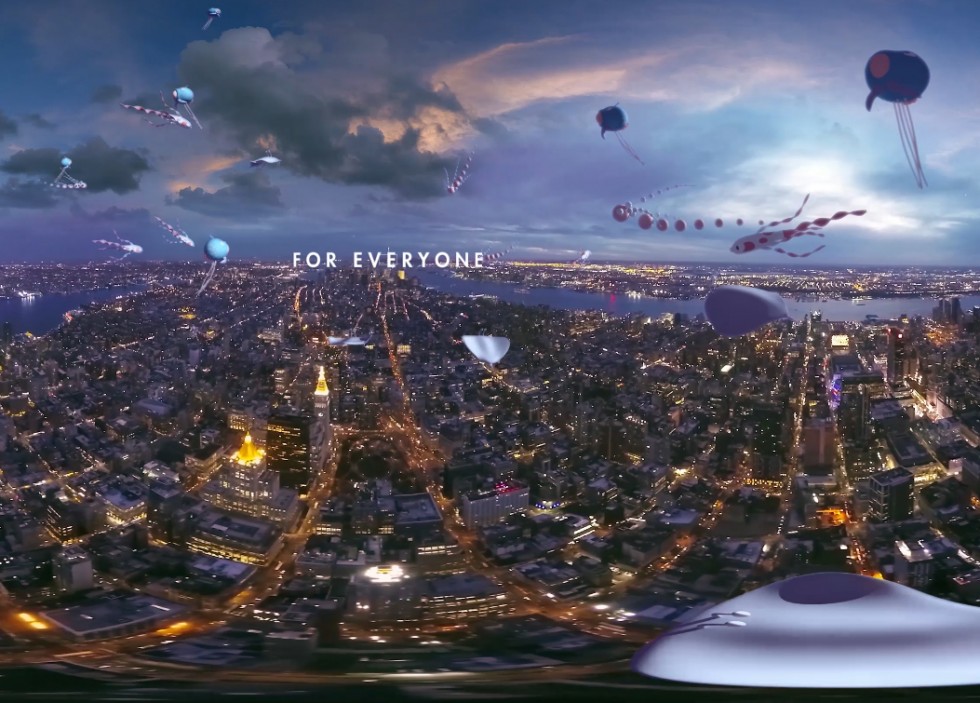 What was your production pipeline?

The character animation was all on cycles, so our animator modeled, rigged and animated the characters based on Robertino’s designs. Once done, I loaded the 360 footage into Mettle to do the 3D track.

Once the scene was set up, I’d do a test render at low resolution and import the footage into Mettle to see how it was working on the footage. Because the characters were never planted on the ground the accuracy of the track was much more forgiving. I’d then render the multiple passes: colour, shadow and highlight. These were 4k renders and in total each shot was up to about 20 Gb. Renders were pretty quick at about 30 seconds per frame.

Once rendered, I pulled everything into AFX and started comping. I used Lumetri Color After Effects plugin to colour correct. It slowed the comps down considerably, so I’d turn them all off once I had my colour set, then turn them back on to render. Getting the text and the portal transition working was fun. 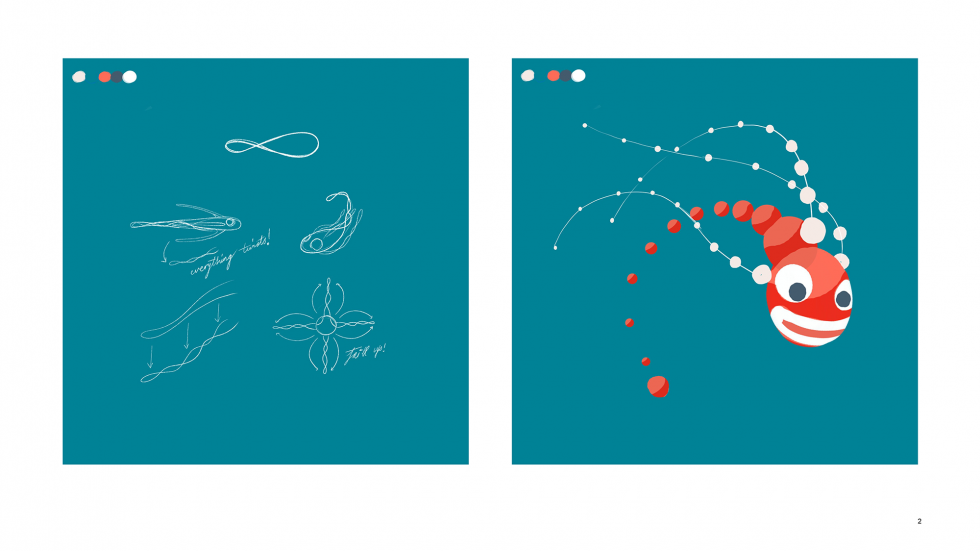 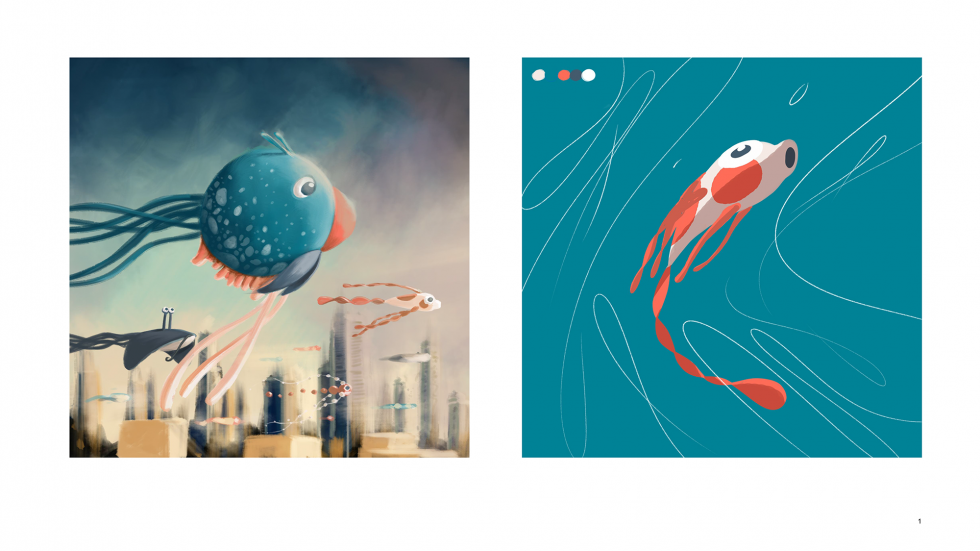 Character design for the 360 video.

Tell us about the 360 transitions between the landscapes. How exactly did you do them?

In After Effects, I’d create a comp with the 360 footage and the character comped onto it (colour correction, lightwrap etc). Using this comp, create a new 3D Edit Inside Mettle. This edit will contain the text animation and a stroked shape layer square that will be the white border for the portal. I called this one TextAndBorder. All layers are 3D and parented to the square shape layer. Here is where I slowly animated the shape layer moving towards the camera with the text reveal parented to it.

Then another 3D Edit was created using the same inital flattened 360 comp. This is the Matte layer for the portal. Copy and paste the shape layer square from the TextAndBorder 3D Edit into this one, then remove the stroke and add a fill. Hide the 360 footage on the bottom layer so only the portal square is visible.

Now hit the Open Output/Render button and double click on the comp in there. Inside there will be 3 comps. The bottom one is you background and the 2 above it are your 3D Edits, one the TextAndBorder and the other the Matte(Mettle doesn’t rename your comps here so they’ll be called XXX_SkyBoxV2Edit1 or something similar). Now make sure the matte layer is directly above your footage and Alpha Invert a TrackMat on the footage layer. When the square floats past the camera into the negative z axis you need to invert the alpha. It’s a bit odd to explain, but when you create the matte you’ll see why.

Once you do this for two shots, you can start comping the shots together in a new composition. Line the second comp up so it starts when the portal matte pops up on the screen. I actually rendered each shot out as a sequence with transparency then comped them in Premiere. It was a bit faster for me doing it this way.

What kind of software and hardware did you use in this project?

We used Maya for the 3D character animation. Premiere for previs/animatic and After Effects with Mettle for comping. Adobe Audition to edit the music too. All machines are windows 7 i7 with 32 Gb RAM. No amazing hardware here, but it did the job.

We had about 5 weeks from concept to delivery. Actual production after the concept was approved was about 3 weeks. Not much time, and late nights were had.

We learnt a lot on this project and are keen to start on another 360 project. I’ve actually got a few ideas for 360 short narratives that I’d like to play with soon. It’s such an immersive viewing experience and there’s some real opportunities for people that can nail the unique story telling techniques 360 viewing holds. We’ll be back in Mettle soon!

So where did your company name come from, “Poke the Bear”?

The name Poke The Bear comes from the line “Don’t poke the bear”. It basically means “don’t piss off someone deliberately”. In practice, it’s suggesting that the company isn’t afraid of pissing people off with the messages we put into our creative work. The personal projects we’re currently developing are definitely being true to that.

Sounds intriguing! We look forward to seeing what you create.

About Poke the Bear

Poke The Bear is an animation company based on the Central Coast of New South Wales, only an hour north of Sydney. The studio is owned by multiple award winning Director and Producer Guy Jamieson, who has been working in the animation scene in Sydney for over 20 years.