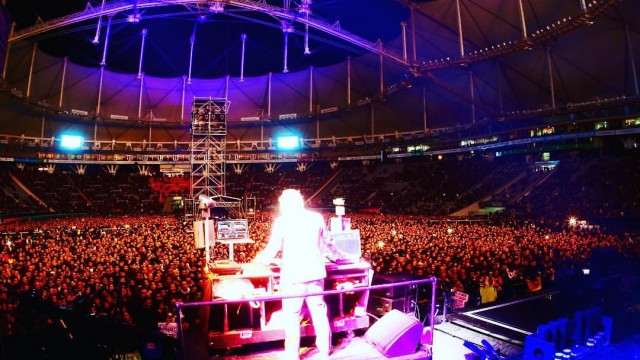 Paul McCartney One on One tour | Chris Holmes | Mantra VR

Chris Holmes has spent the greater part of the last seven years touring the world with Sir Paul McCartney as his show opening DJ. Videos from his recent DJ sets for McCartney One on One Tour use Mettle Mantra VR in Premiere Pro for stylization and effects. He captured the event with the Insta360 One camera, and used Mantra VR to quickly and easily stylize the 360 footage.

Chris explains, ”I was able to take a relatively boring capture of a really special set and turn it into something magical. I was really happy the way Mantra VR effects helped breathe life into something I thought had not much potential on its own before.”

As well as being a DJ for McCartney, he describes the former Beatle as “the least disappointing, most inspiring human I’ve ever met”. Holmes commenced with McCartney at the former Beatle’s 2009 Coachella appearance, for which Holmes worked up a special set. Chris is also a VR visionary, musicologist, producer and former advisor for New Frontiers Lab at Sundance Institute, and consults with a lot of VR companies, including With.in and Marshmallow Laser Feast.

You can try out Mantra VR by downloading a free demo here. Mantra VR is a new 360/VR plugin for After Effects and Premiere Pro. It is a set of 16 stylization and practical effects that you can apply directly onto your 360 footage. It complements and extends the capabilities of Mettle SkyBox Suite, which has been acquired by Adobe, with target integration into Creative Cloud by end of 2017. 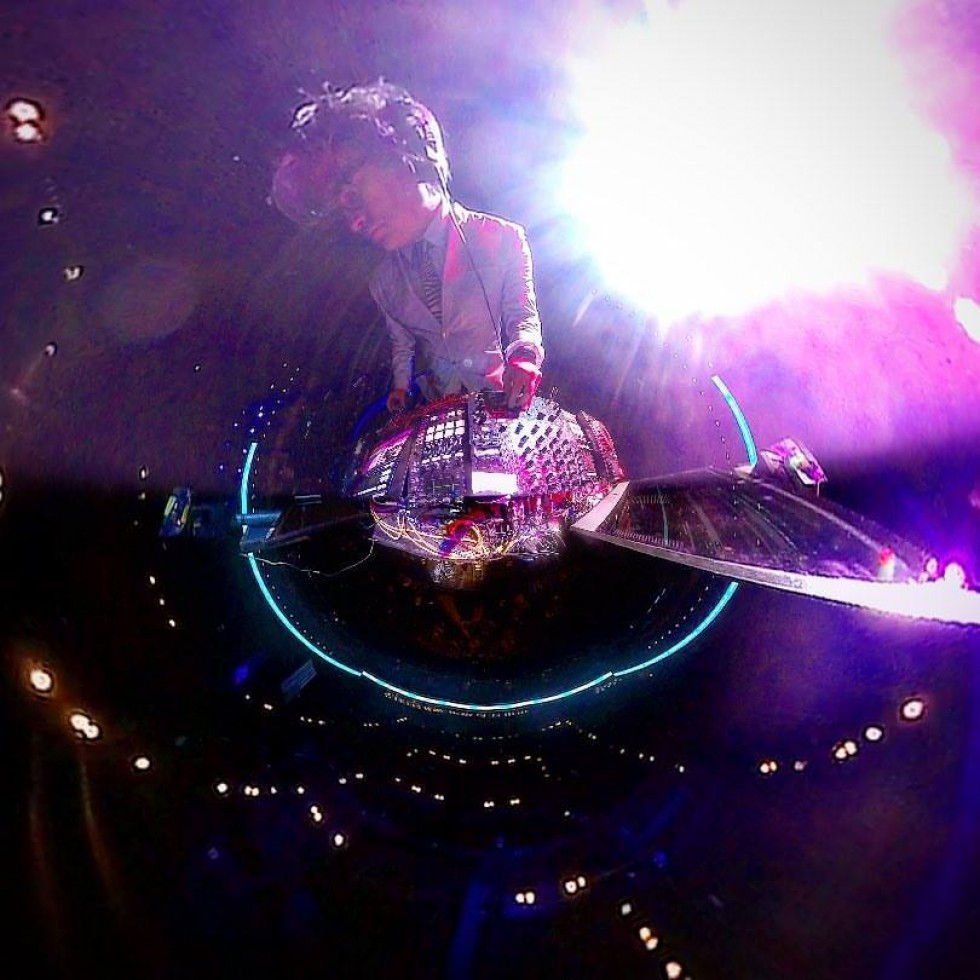 Mettle caught up with Chris Holmes, who made time in his busy schedule to talk about his creative goals and 360 Post techniques on this project.

It’s great to have the chance to talk with you Chris! Can you tell us how an international DJ such as yourself, touring with none other than Paul McCartney, also ends up filming and editing 360/VR videos?

I first was introduced to VR in a major way through the work of my good friend Chris Milk and his brilliant video he made for Beck playing David Bowie’s “Sound and Vision”.  I had heard of VR before that, but his work opened my mind up to the potential of the format.

After that and working as an advisor for the Sundance New Frontiers Lab, I started to play around with VR myself. Around that time you guys came out with your Skybox software. Until then there weren’t a lot of user friendly options for working at home in VR.

Skybox really opened up the whole world of VR for me. It made editing and manipulating VR so much easier. I could use it in either Adobe Premiere of Adobe After Effects. Mettle did such a great job with tutorial videos that I became obsessed with watching all of the videos and trying the techniques in my own videos. It was really inspiring.

It must be incredibly exciting and inspirational to tour with Paul McCartney. We love what you did with the 360 footage from your DJ sets on tour. It’s pretty unique, taking 360 footage, adding FX and rendering out into conventional video format. What led you to try this out?

This is an experiment using 360 footage, editing it and then morphing it into flat footage,so that users can experience the sets without VR. I wanted to take advantage of the 360 view, but direct the viewer’s gaze in 2D. It’s more of a challenge to do that in VR. Since I shot the footage with a static camera on tripod, I could add the camera movement in Post with SkyBox, and experiment with Mantra VR for the FX. I then framed the view I wanted for the final render. 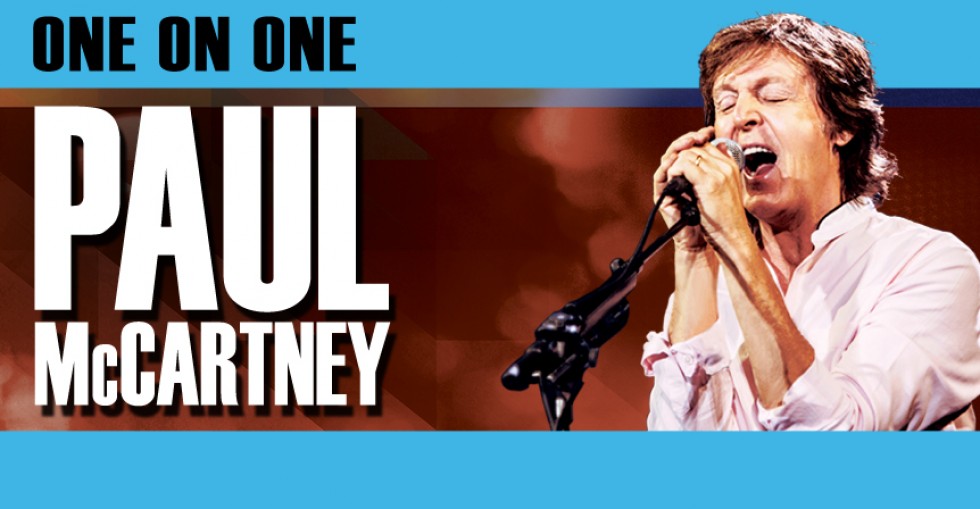 For my process for these videos, using a MacBook Pro, I loaded the VR footage directly into Adobe Premiere and then added variants of Chrome Spheres and Mirror effects and animated them using keyframes to rotate the spheres over my head and around my gear to reflect my DJ setup, no matter where I positioned the camera in post.

This summer I preordered the Insta360 One and it has been incredible to work with. It’s iPhone and Mac compatible out of the box and has amazing resolution. I now work with a couple of the Insta360 Ones to get different camera angles for the live, because they are so affordable.

Right after I got the Insta360 One, Mettle released Mantra VR and it was an amazing synergy of being able to work natively on my Mac from start to finish.  The plugins are so powerful, yet process video in real time in Adobe Premiere.  It’s made it possible to work on videos on my iPhone and laptop while I’m on the road.

“I love the Mantra VR plugin. The effects are a godsend.  I love the ease of working with them in [Adobe] Premiere.  It was so incredibly straightforward and easy.” – Chris Holmes. 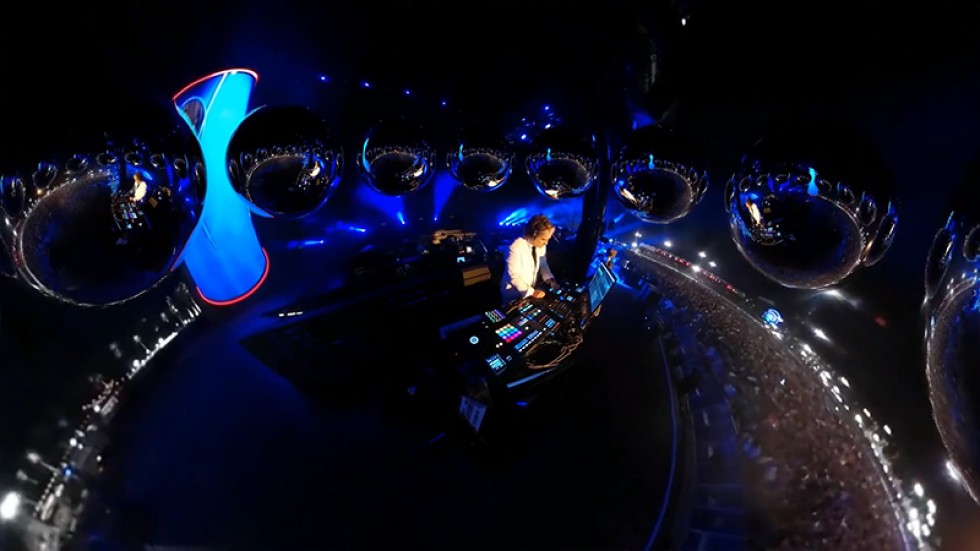 An important part in the result is how the effect, designed for 360 footage, displayed on flat footage. The spheres take on a life of their own when morphed into 2D space. I found they really help balance the insanity of the dimensional warping with their consistent regular geometry. I also made a couple test keyframing mirrors which also creates some really surreal camera angles. I love the distribution settings in Mantra VR and the fact that you can keyframe just about anything. The finished result really captures the feeling of my DJ sets perfectly.

There are a few ways to render a 2D view from 360 footage. How did you do it?

I applied Mantra on the VR footage in Premiere using variations of Mirror and Chrome Sphere effects. I rendered the footage with all the Mantra effects as 360, and then flattened the footage into 2D using the Insta360 Studio App recorder function, where you can keyframe camera movements and warp them to 2D. You can  do something similar straight in Premiere but I wanted to check out the Insta360 App.  I’m going to use Mantra VR to put in song titles and some graphics in the next one, using the Graphix feature. 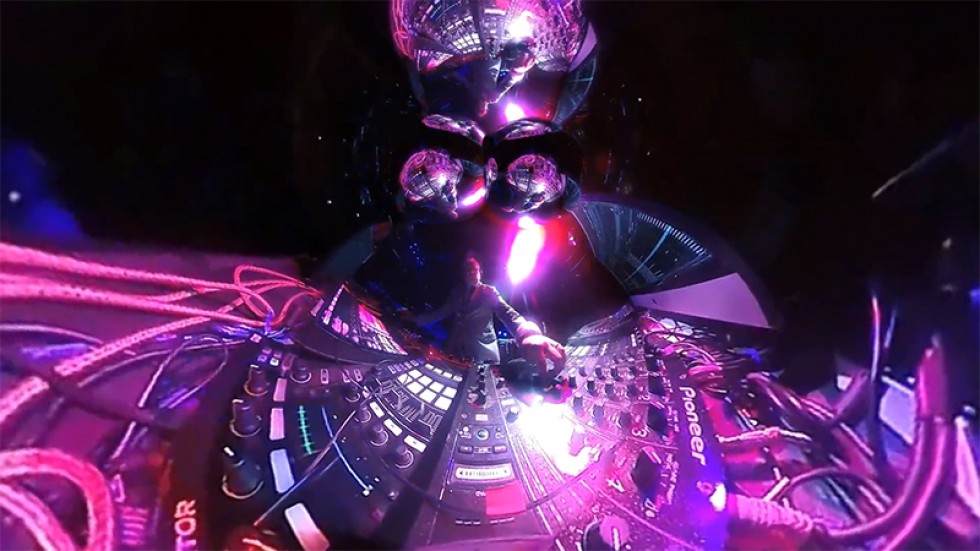 We developed Mantra VR to work in both After Effects and Premiere. How does that help in your workflow?

I love that you made the Mantra VR plugins Premiere compatible. It’s a lot less intimidating than trying to get under the hood of After Effects, though I’m a huge fan of AE too.  It’s really changed the way that I approach VR and especially using effects.  The feedback is immediate and really tangible.  You drop the effect in, set the parameters, press the spacebar and you can see the results in real time.

I was able to take a relatively boring capture of a really special set and turn it into something magical. I was really happy that the Mantra VR plugin helped breathe life into something I thought had not much potential on its own before. 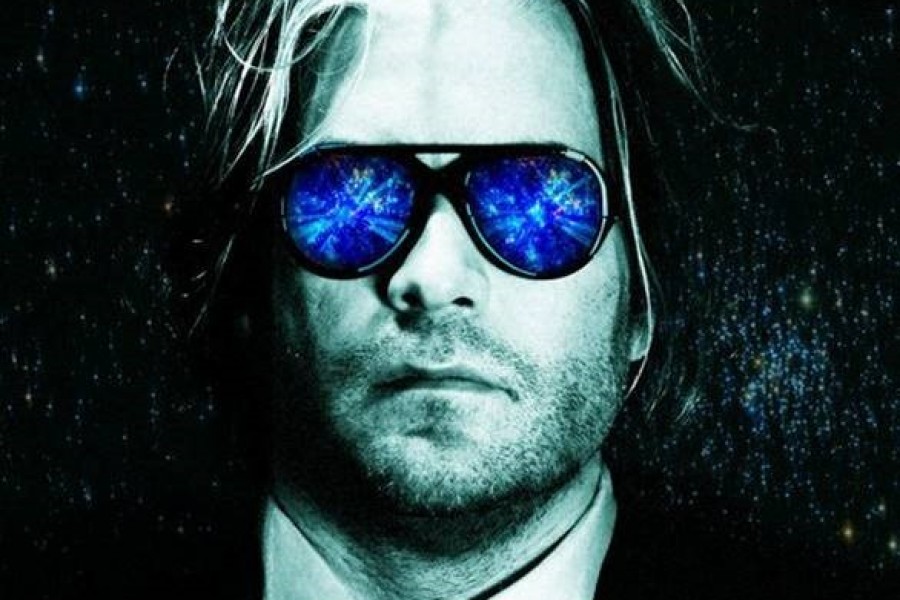 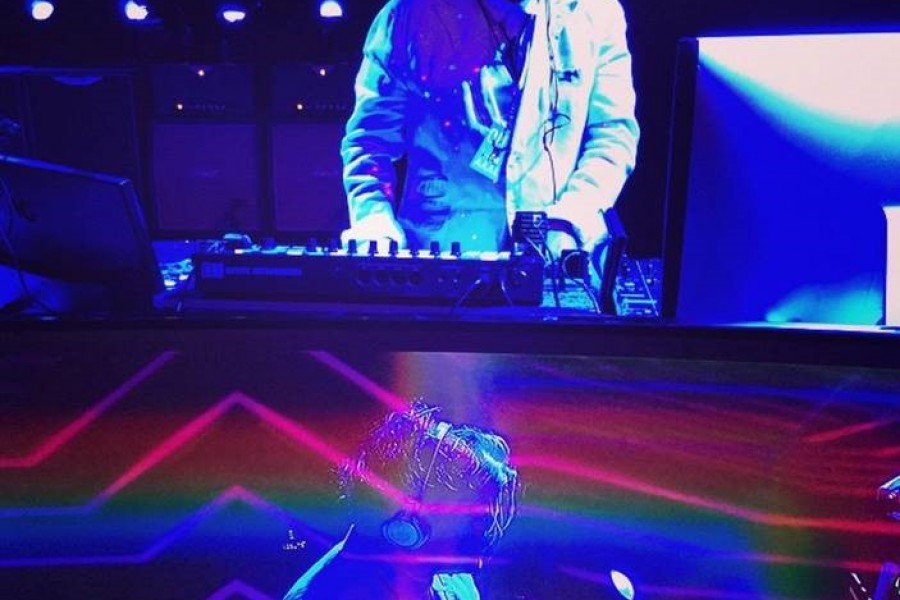 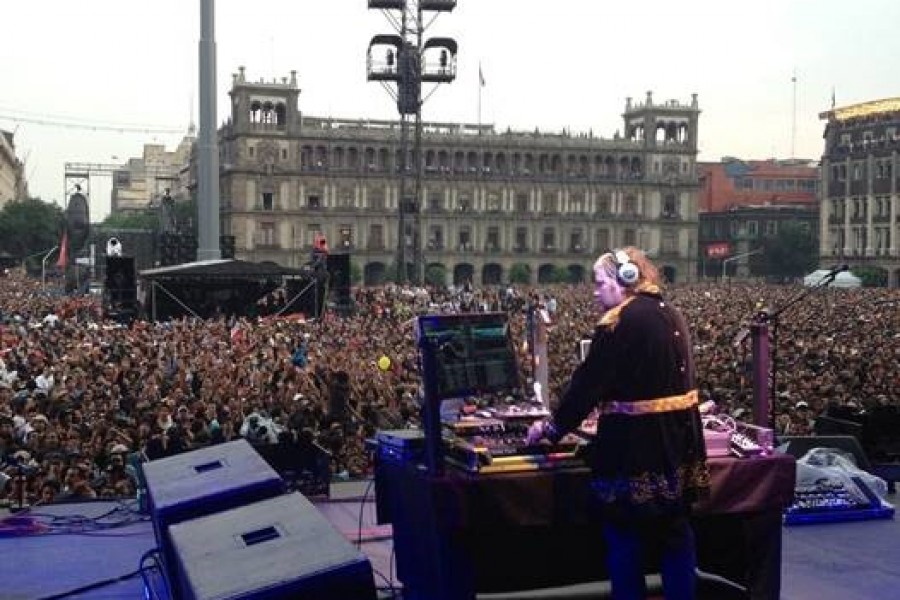 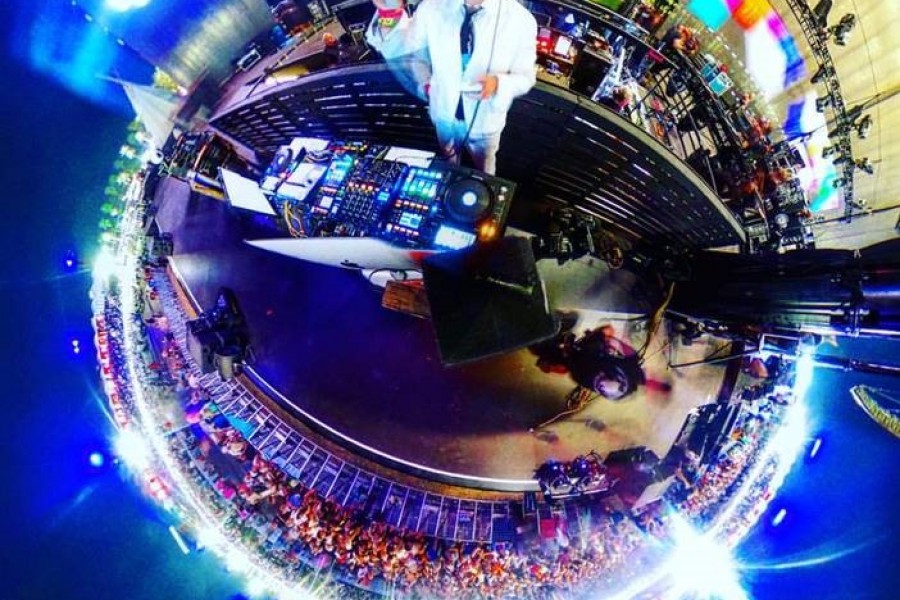 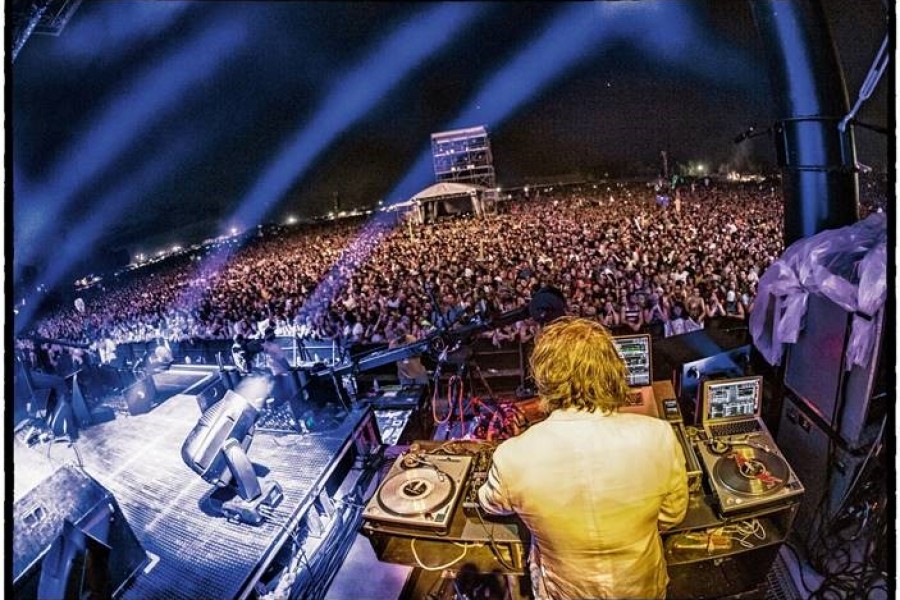 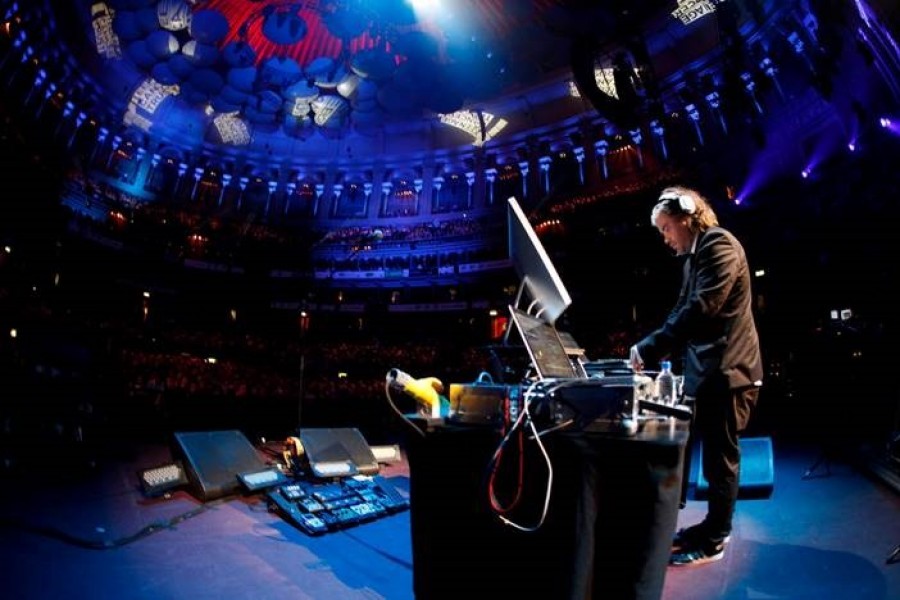 Your results are quite amazing. The effects are mesmerizing, going way beyond a static camera set up onstage. Do you plan to continue down this road of experimentation?

I am working with some awesome VR artists in LA and plan to start doing a lot more than just capturing the performances in VR.  I also like that it helps push VR tools out of the VR goggles world.  It felt a lot like working with 4th dimensional space making these.  Reminded me of Flatland and Sphereworld books.

I love how the 360/VR footage brings another dimension in visually for capturing the energy of a DJ set.  It allows the viewer to experience what’s going on in my head during my sets as well as allowing them to see what it is that I’m doing with my equipment during the performance.

It creates a level of intimacy at the same time as keeping the imagery moving and engaging.  There is nothing more boring in the world than watching a video of a live dj set from a static camera angle.  Hopefully by using some of the Mantra VR magic it will allow us to transcend that boredom barrier, and create some magic.

The best part is that all of this can be done very economically.  You don’t need a whole film crew or drones.  I shot with the Insta360 One camera, edited and did Post on these myself in about 3 or 4 hours each.  I think it also has tremendous potential for live visuals, whether for viewing online or live on a large led screen.  It opens up a world of potential for live shows. 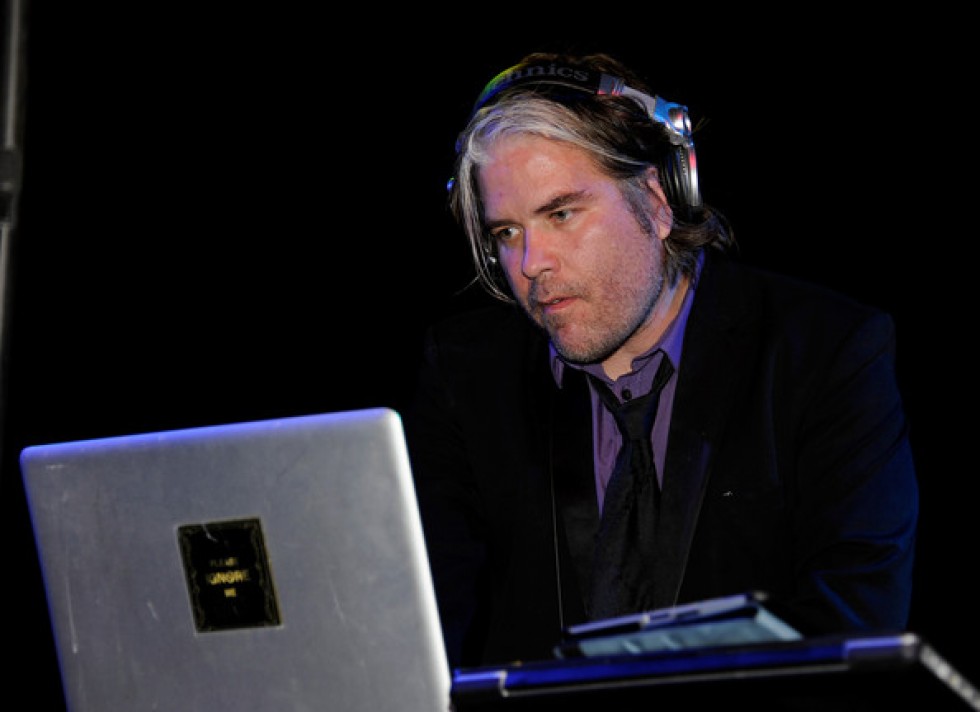 Chris Holmes is a visionary, musicologist, producer and conduit. He spent the greater part of the last seven years touring the world with Sir Paul McCartney as his show opening DJ. Chris has produced events for Rolling Stone magazine, Annapurna, Eric Garcetti, NPR, The Black Keys, Radiohead, Atoms for Peace, Pussy Riot, Adult Swim, Cinespia/Cinefamily, AMC, Comedy Central, Sundance, Daft Punk, VICE, and is also the resident DJ and promoter of one of Hollywood’s most successful parties, Nightswim. Holmes has also worked with Disney to develop a parallel mixing platform for the company’s Fantasia game, as well as Rockstar Games as both a composer and consultant.  He is an advisor for Sundance Institute New Frontiers Lab.

Holmes brings his love of art and technology to his humanitarian efforts where he is Co- Chair of the Voice Project and Music Director for the Art of Elysium.  Chris also developed a line of anti-paparazzi Flashback clothing with tech/clothing startup Betabrand, featuring retroreflective fabric that foils flash photography.

You can see some of Chris’ work on Vimeo and Soundcloud.