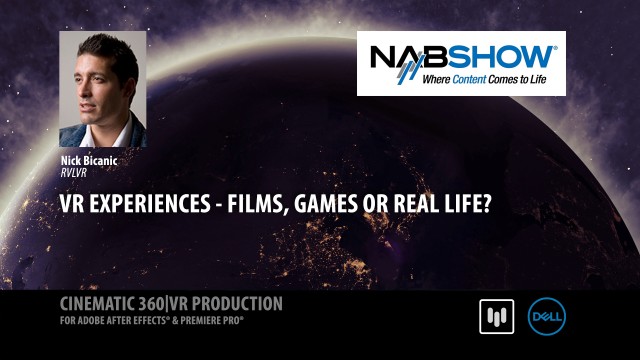 Nick Bicanic (CEO of RVLVR) presents his views on the state of VR Experiences, and which one will win out. He looks at the Uncanny Valley of VR; the more the storyteller or game-designer wants to immerse the viewer in a reality,  the higher the demands for something accepted as real. Nick believes scripted photorealistic 360 drama will grow faster in VR than interactive game engine driven VR worlds. For example, there can only be stakes when the viewer feels emotionally connected with the environment, when you have meaningful permanent impact on the narrative. When Jon Snow watches Ygritte die — we feel for him — because his emotion registers as real.

This presentation was hosted by Mettle at NAB 2017.

Nick Bicanic is a filmmaker and a technologist who mixes left brain and right brain stuff on an ongoing basis. He is a serial entrepreneur and is considered one of the best Mobile Product visionaries in Silicon Valley. He has raised money from Silicon Valley luminaries including Google Ventures and has 20 years of experience running multiple teams developing complex client-server applications and processes on mobile and cloud based platforms. He also wrote, directed and produced the 4 time LEO award winning documentary “Shadow Company” – a unique insight into the secret world of modern day soldiers for hire and produced “The War Against Boko Haram” for VICE News and published his first book – “Executive Outcomes” – a graphic novel based on his script of the same name. He is now focusing on developing storytelling technology and content for Virtual and Augmented Reality.