Influential DJ Mix Master Mike, well-known for his work with the Beastie Boys, released a free album online titled “The Magma Chamber”.  (listen on Soundcloud)  Instead of doing a traditional music video, he decided to go for an immersive experience to bring the fans into his world. The album artwork by illustrator Tony Washington was brought to life by Jonathan Winbush (Winbush Design & Animation Studio) through a combination of Concept Art, Cinema 4D, live action shot on Greenscreen, PhotoShop and Adobe After Effects with mettle 360/VR plugins. The result is awesome – the viewer gets to experience the music and visuals inside Mix Master Mike’s virtual world.

Album cover art by Tony Washington was interpreted into the 360 VR Video.

Where did the concept for the Magma Chamber 360 VR come from?

Earlier this year Mix Master Mike released an free album online titled ” The Magma Chamber ” ( https://soundcloud.com/mixmastermike-3/magma-chamber) and instead of doing an traditional music video we thought it would be fun to go outside of the box and create an immersive experience to bring the fans into Mike’s world.

How did you get involved in the project? Had you been working with Mix Master Mike already on other productions?

This is my first time working with Mike. My good friend Tony Washington is Mike’s illustrator. He creates all of Mike’s album covers, and was working on Mike’s comic book series Zoldar at that time. So when I talked to Tony, telling him I was experimenting with VR at the time using the Oculus DK2, he told Mike and we immediately starting talking about how we can bring all this together.

From concept art to green screen to 360 video.

“The most incredible part of using SkyBox 360 VR Player was being able to work on my 360 After Effects project file while wearing my Oculus RIFT. I never had to leave – I just switched from 360 to flat view with ease.”

So tell us –  what was your production pipeline, from concept through final 360 video?

When we started out,  I honestly wasn’t sure how we were going to achieve the level of detail we wanted, since there wasn’t really any 360 tools available. This VR stuff was like the wild west with everyone just trying to figure out their pipeline. With my background being in motion graphics, I knew I wanted to use programs I’m familiar with, such as Cinema 4d and After Effects – to allow me to work fast since I know the ins and outs of these apps.

Building the worlds was the easy part, Tony had done concept art of each of the scenes we mapped out and so I would recreate those scenes in Cinema 4D and render them out in 360 using Octane render engine spherical camera. I would then send back a layered PSD to Tony and he actually went in and hand painted a lot of the really fine detail in there on the equirectangular 360 file, which still to this day seems crazy to me since the image is in a warped view. He would then pass me back the file, and I brought the files into After Effects to separate and add depth.

Since we shot Mike and our dancers on green screen using the Sony FS7 in 4K at 60fps, it was tricky figuring out a way to composite them into our scenes. I did tests where I would key out the footage, bring it into cinema and then render back out with Octane, but that process just took way to long. Luckily I came across Mettle’s site on one of the blog’s that said they now offered the SkyBox VR Player that would connect an Oculus RIFT within After Effects so when I went to check it out I saw Skybox Studio was an actual way to work in AE using 360 files, so keying the footage then putting it in the scenes was a lot more effective.

After playing around with Skybox Studio I even figured out how to use Red Giant Particular with Skybox Creator to create several atmosphere effects like fire embers and fog. I would say the most incredible part of it was was being able to view the 360 scenes in real time using the HMD (Head Mounted Display) and the Skybox VR Player. A lot of times I was even working with the Headset on and just switching between the flat view and 360 view. 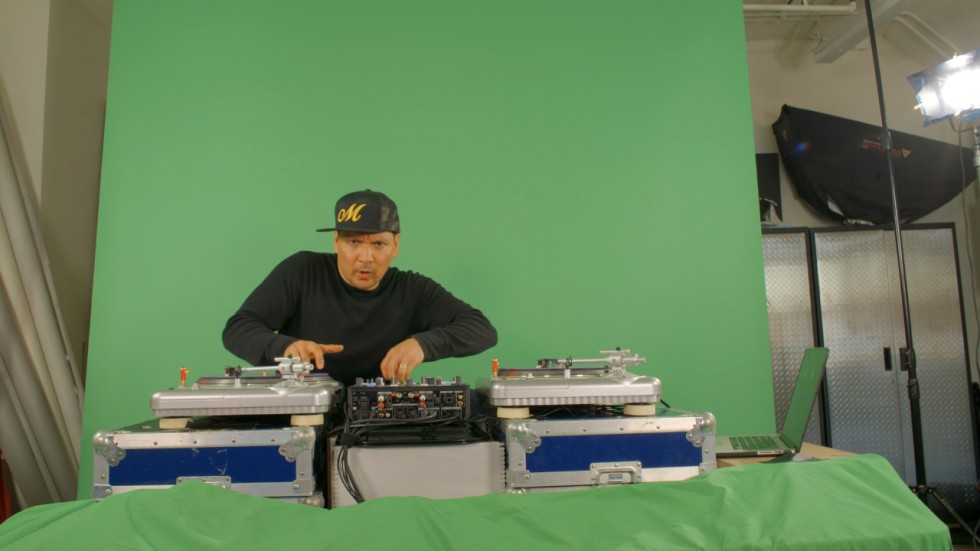 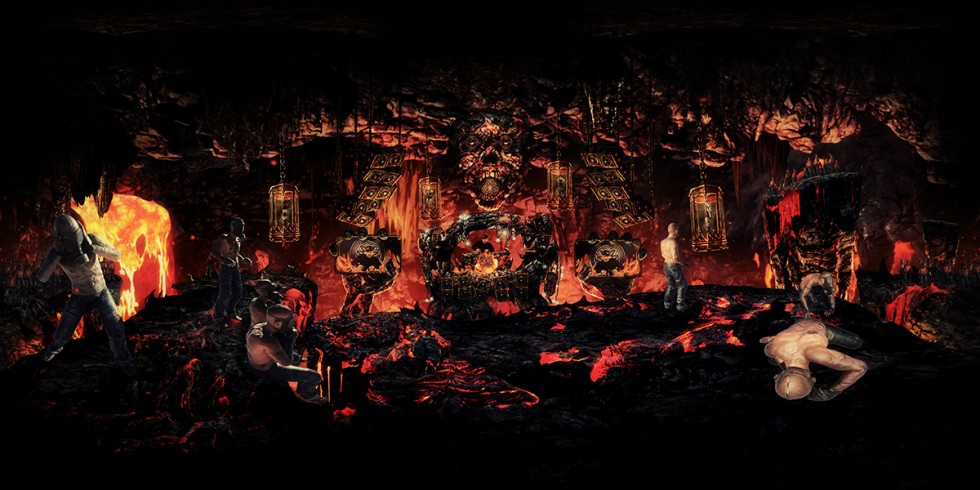 A: I build my workstations from scratch. For this project I used:

Are you integrating some of the visuals into live shows? What are your plans moving forward with VR?

We just recently had a meeting with the good people at The Vortex Dome about bringing the Magma Chamber to their venue. The Vortex Dome, for people who don’t know, is a spherical building that almost looks like an igloo, but when you’re inside it the 360 footage is projected all around you, so that you can experience it with a crowd of people and not a headset. So hopefully well have our experience in there soon. The Magma Chamber was a way to showcase what we can do in 360 VR and only hope this is the beginning of many VR projects moving forward.

I would love to give a special shout out to my team / family. Tony Washington – the concept artist and illustrator, Robert Buchanan our DP for the shoots, Mix Master Mike for believing in our vision and being a good friend. And last but not least Mike’s manager Dianne Copeland for having faith in us to bring Mike’s vision to life. 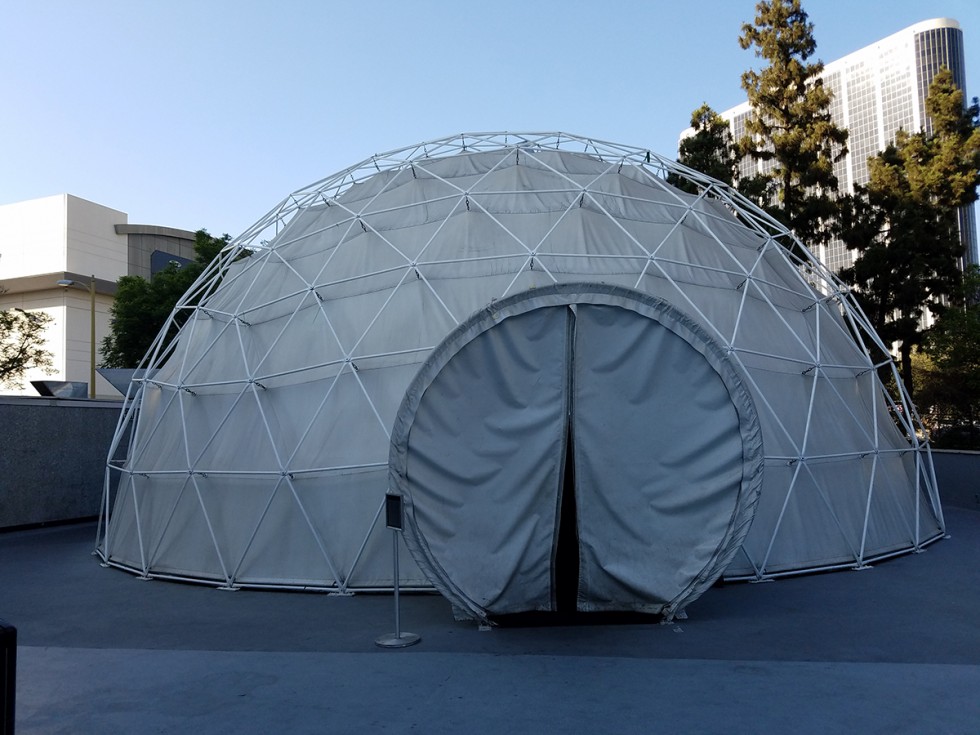 Portable dome, where VR experiences can be viewed without headset. 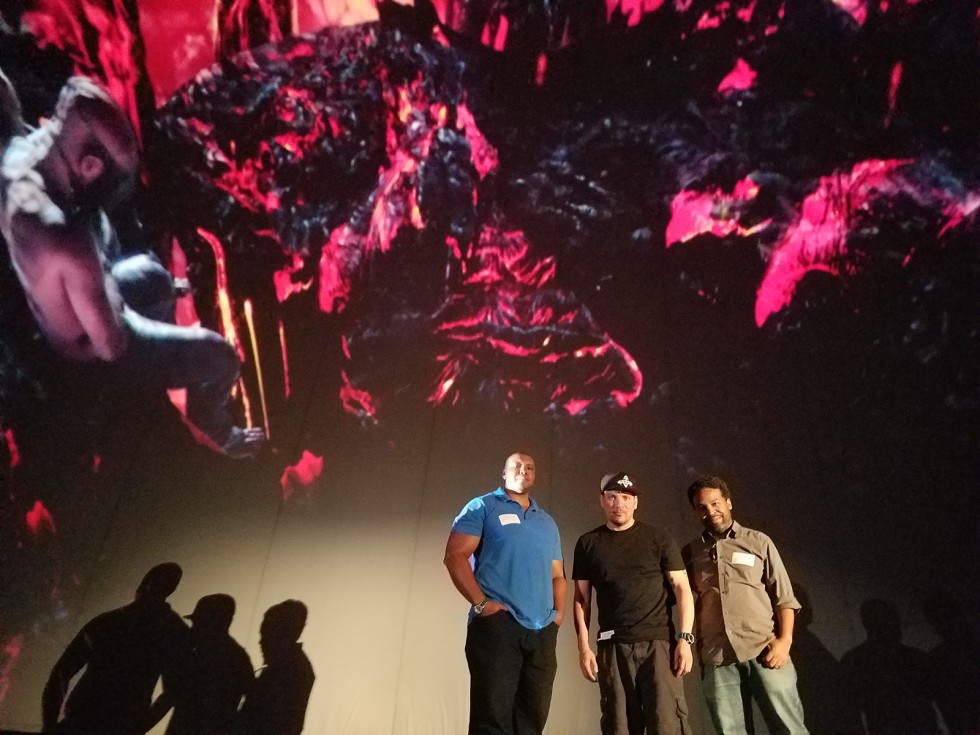 Since 2006, Jonathan Winbush has been working in motion graphics on many high profile properties for studios such as Marvel, DC Comics, Warner Bros, Hasbro, Discovery Channel and many more. In 2011 he was rated as one of the top 25 artist in Hollywood by Inferno Development and went on to win many awards including Promax BDA, Bafta, Tellys and Pixie Awards. He has also had worked published in Advanced Photoshop Magazine, HDRI 3D Magazine, Computer Arts Magazine and several Art Institute brochures. In 2012 Jonathan moved to South Orange County to start his own motion graphics boutique called Winbush.

New York Times best selling artist, Tony Washington has been creating award winning art for Comics, Movies, Video Games and various branding opportunities professionally for over 20 years. His big break was at the age of 18, where he was hired by Image comics where he first learned photoshop and other forms of digital art. With that experience, he then transitioned to videogames with Midway Home Entertainment. Which led to the opportunity to become a freelance artist on the film relaunch of TMNT, various video games with Sony and the highest selling trade paper back in Wildstorms Comics history with World of Warcraft-­‐Ashbringer. He has also provided art for Mix Master Mike of the Beastie Boys, Boxer Victor Ortiz and Lady Gaga for her Monsters Ball Tour. This year also saw the release of San Diego Comic Con Exclusive poster for The Crow. Recently Tony has created 2D concept, environment and texture art in his first VR related project Magma Chamber VR for Copeland Entertainment. Tony has been a guest speaker at multiple schools in the San Diego Area and when he isn’t drawing, he also produces music under the name Stations Stories.