We’re proud to say that one of the standout 360/VR films from Sundance uses some Mettle tech mixed in with the magical story. For the Amazonian Yawanawá, “medicine” has the power to transport you in a vision to a place you have never been. Hushahu, the first woman shaman of the Yawanawá, uses VR as medicine to open a portal to another way of knowing. Awavena is a VR short film that is a collaboration between a community and an artist, melding cutting edge technology and transcendent experience so that a vision can be shared, and a story can be told of a people ascending from the edge of extinction. The latest Mettle tech, Mantra VR for After Effects and Premiere Pro was used in post. Thank-you to Marcie Jastrow, Lynette Walworth, and the whole team.

Awanena is produced in association with the Sundance Institute and Technicolor. The film used SkyBox (Adobe CC 2018 VR tools) along with Mantra VR, in the post-production pipeline. 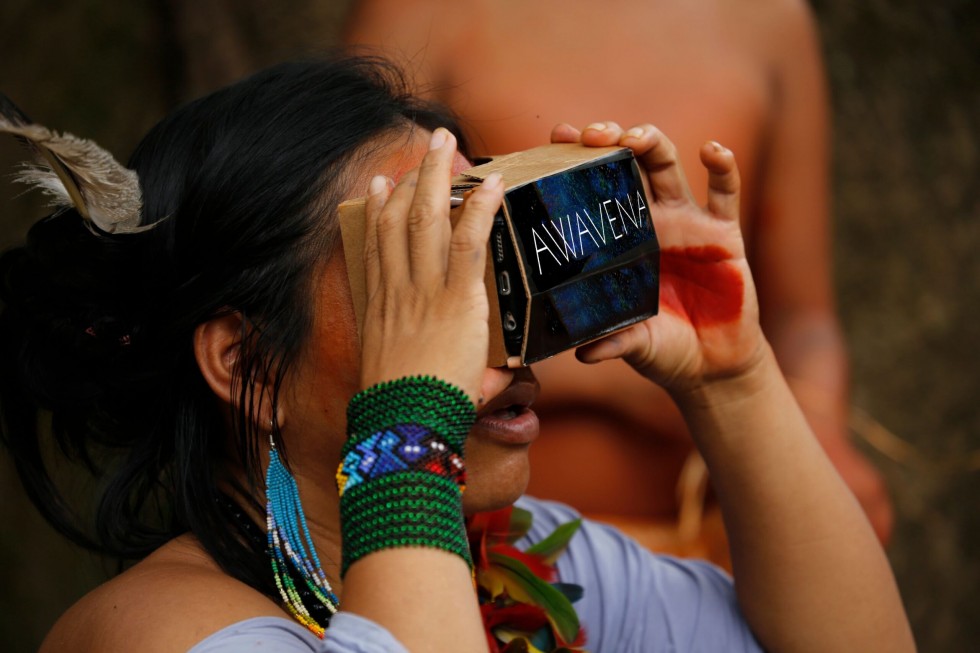 Hushahu looks at dailies in a cardboard VR headset. All photos courtesy of Greg Downing.

Using a technology that the Yawanawa feel enables them to share their story and visions, this immersive work presents fluorescent specimens in previously unseen colors from the forest world, to create a vivid, luminous vision.

Adam Cosco, Director of the Rose Colored VR Short Film, also worked on this project as the VR Editor of Awavena.

The film debuts at the Sundance Film Festival and The World Economic Forum this January 2018. 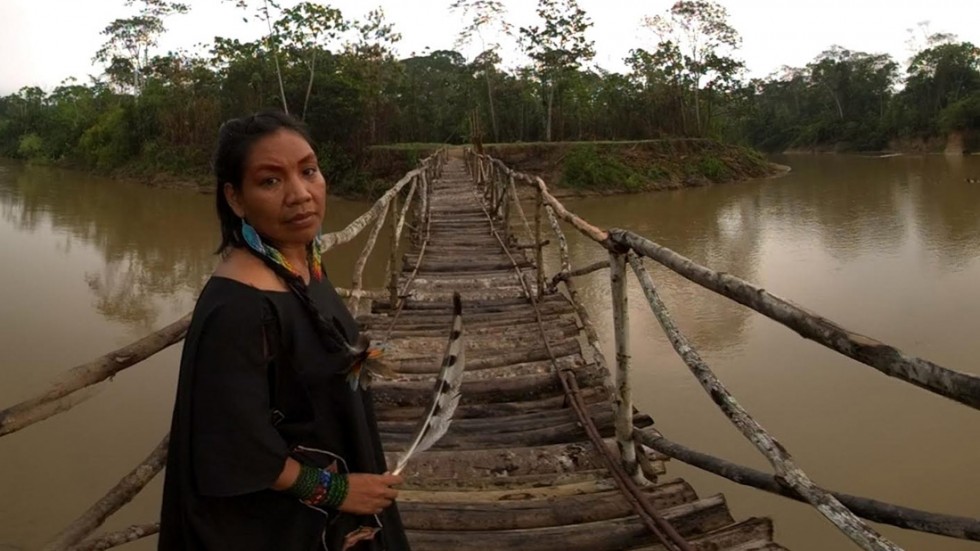 Hushahu on the bridge between the physical and spiritual worlds. Production still from “Awavena.” 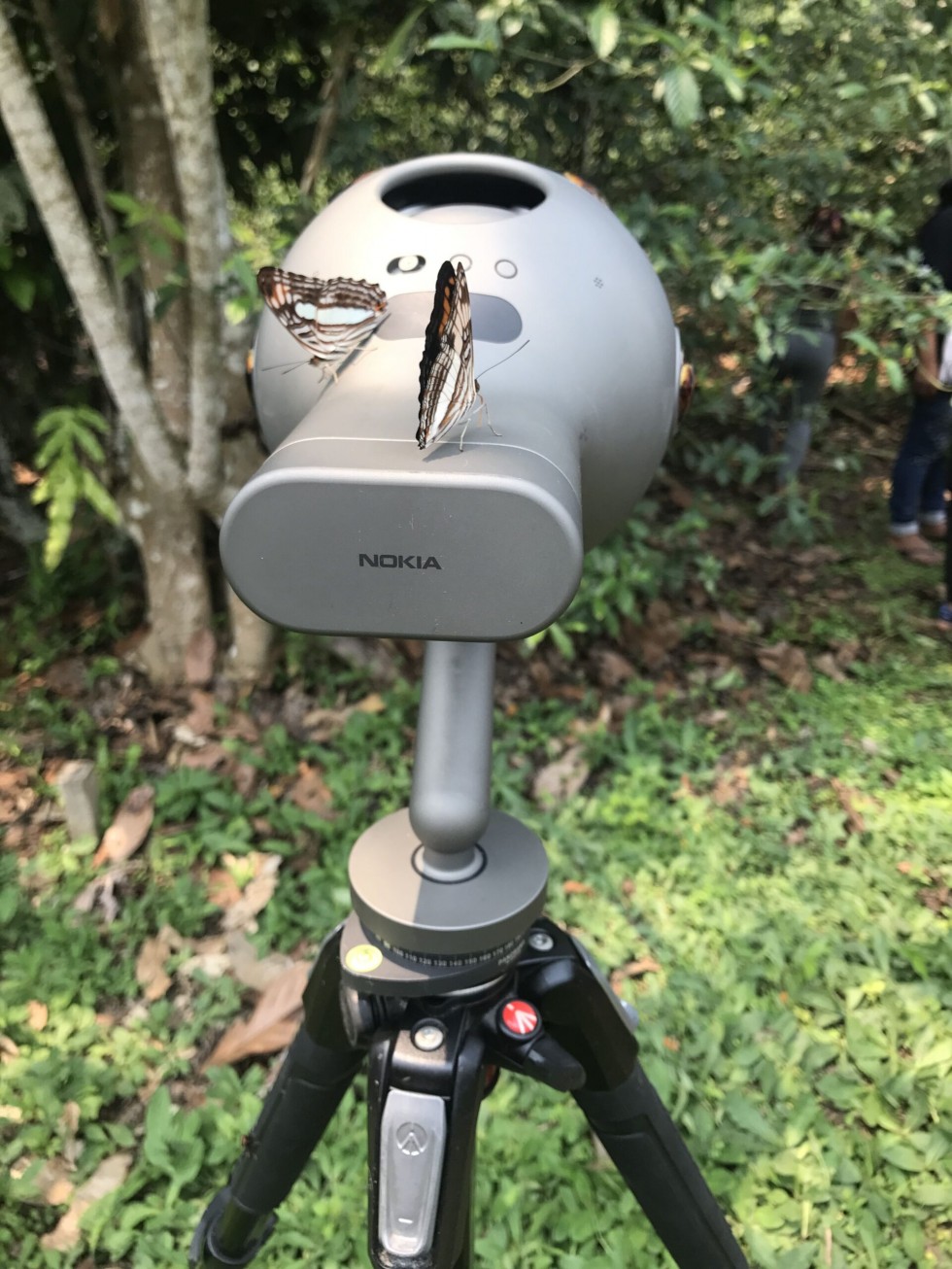 Butterflies land on the 360 camera.

In her Filmmaker statement, Lynette Walworth described how the Film came to be: “The invitation to come to the Amazon to film AWAVENA came from Tashka, Chief of the Yawanawa. He looked at the VR/AR technologies of this moment and saw a compatibility with the visioning techniques that sit at the heart of their society.” 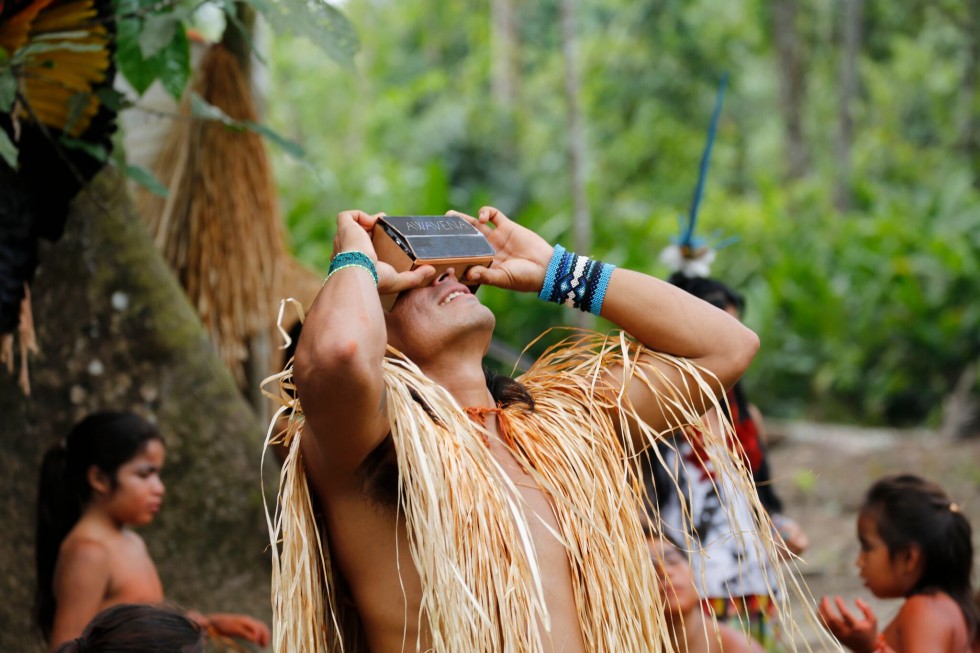 Joel Yawanawa looks at dailies in the cardboard VR viewer.

Tashka said, “These glasses act like medicine, they carry you without your body to a place you have never been, colours and sounds are intensified, you meet the elders, you are given a message and then you return.” Our most current of technologies is still a lesser version of the visioning technologies that the Yawanawa have spent generations mastering”, according to Walworth. 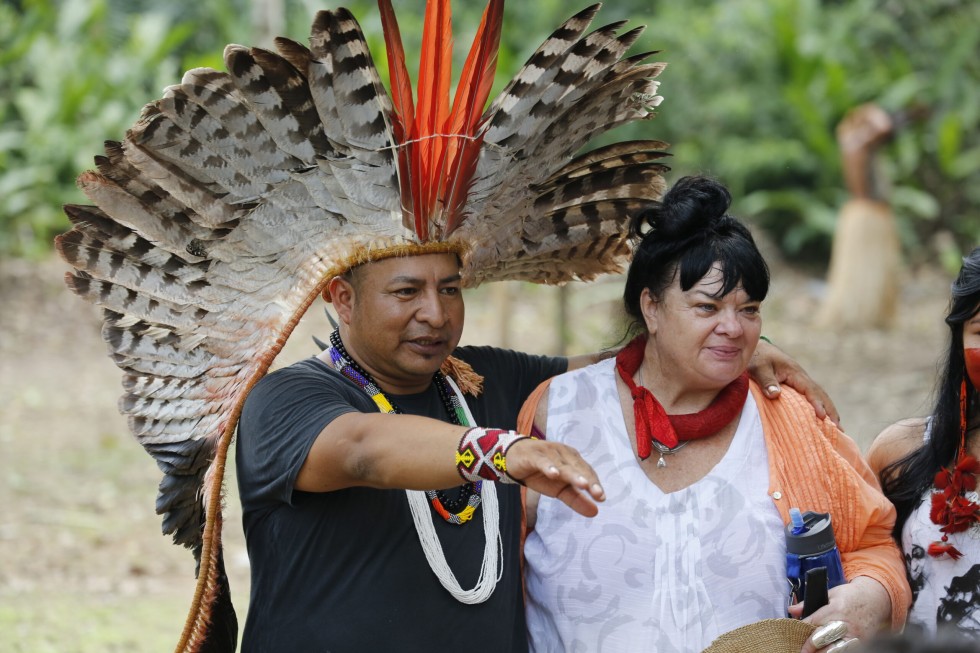 “At the end of last year the Yawanawa sent us a message, Tata the old Shaman was dying, and we should come quickly so his message could be shared. We were privileged to have our cameras there while Hushahu tended to the gracious old man who had trained her. We returned to the community some months later community so Hushahu could hold a vision using the traditional medicines. That vision is precisely the gift the Yawanawa want to share. VR seems purpose built for this challenge as it places the viewer central to the unfolding scene and allows us, for the first time, to see the world as Hushahu sees it, transported in her minds eye by the medicines Tata trained her to use.” 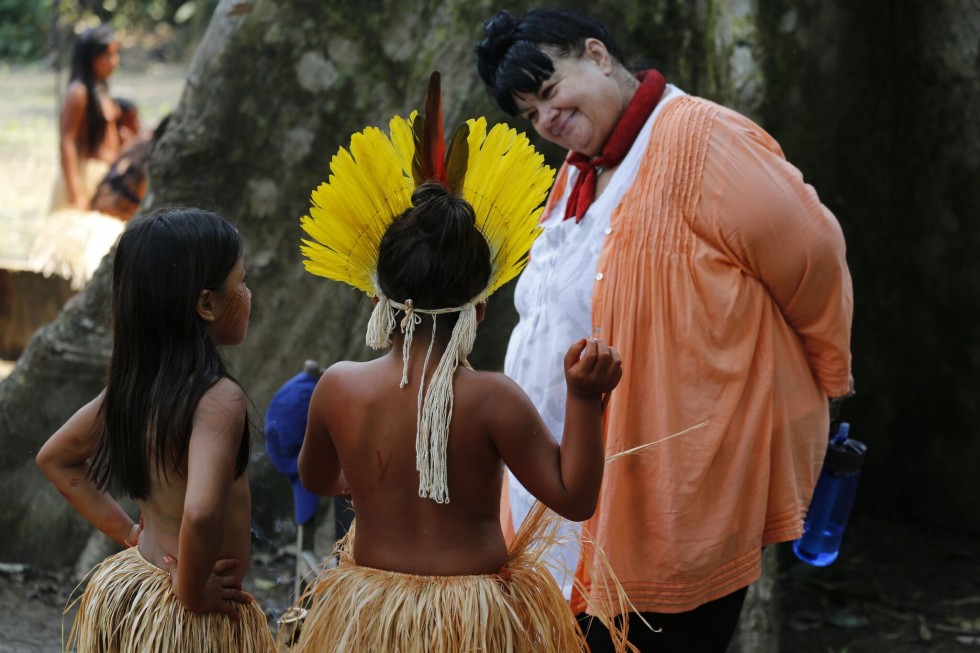 Through a combination of virtual and augmented reality, “Awavena” transmits Tata’s last prophecy, as enacted by Hushahu, into the minds, hearts, and physical realities of each “visitor” who experiences the work. 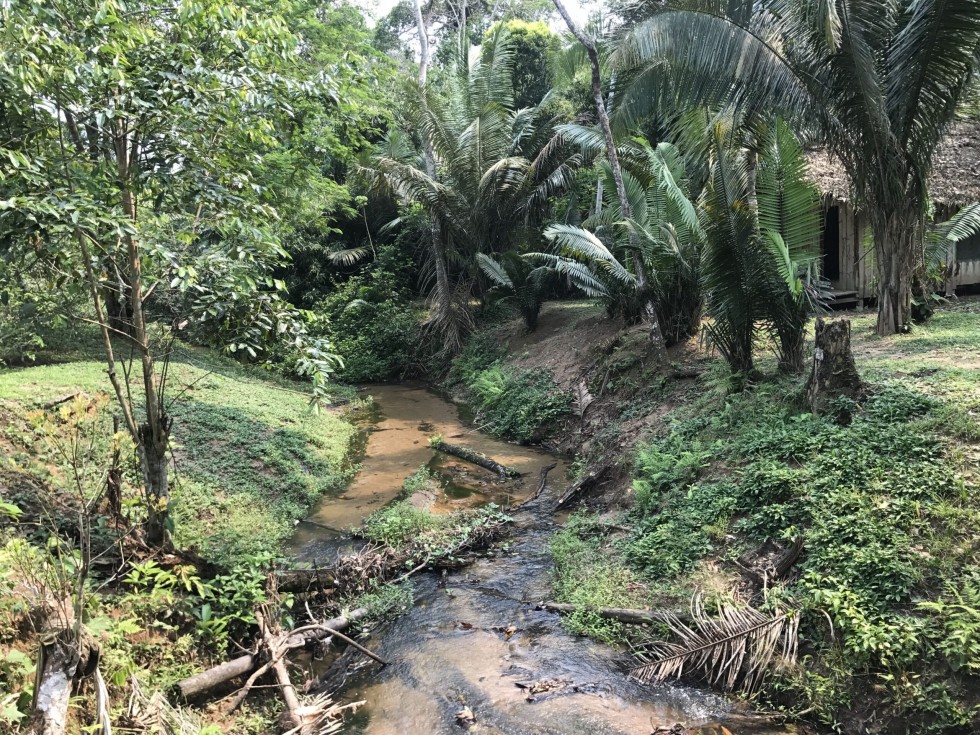 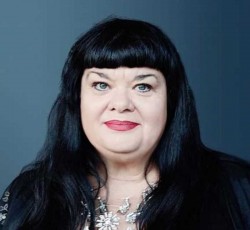 Sandy Herz
EXECUTIVE PRODUCER
Sandy Herz has spent the majority of her career exploring the intersection of storytelling and social change, conceptualizing and building a portfolio of storytelling partnerships for the Skoll Foundation.

Marcie Jastrow
EXECUTIVE PRODUCER
Marcie Jastrow is an industry veteran with over 18 years of experience in the entertainment business. In 2016, Jastrow was appointed the SVP of Immersive Media for Technicolor, as well as the Head of the Technicolor Experience Center

Gigi Pritzker
EXECUTIVE PRODUCER
Gigi Pritzker is an Emmy award-winning producer, and businesswoman. She is the CEO of diversified content company MWM (formerly Madison Wells Media), which she co-founded with former Legendary executive, Clint Kisker.
 
Nico Daswani
EXECUTIVE PRODUCER
As head of Arts and Culture for the World Economic Forum, Nico’s efforts focus on bridging the contributions of artists and the values of the arts into dialogue and decision-making on global policy.
 
Greg Downing
DIRECTOR OF PHOTOGRAPHY
Greg Downing specializes in image-based 3D technologies and computational photography techniques. His photographic work has been displayed in some of the nations most prestigious museums.
 
Brian Frager
TECHNICAL PRODUCER
A specialist in the emerging world of interactive storytelling, Brian bridges the technical and creative elements through a diverse background in film production, coding and game engine development.
 
Katrina Taylor
DOCUMENTARY EDITOR
Katrina Taylor is a Los Angeles based film editor who is drawn to character driven stories and the exploration of sonic landscapes within the documentary genre.
 
Adam Cosco
VR EDITOR
Prior to delving into the virtual reality space, Adam won several awards for his screenwriting and directing, including the Austin Film Festival Screenplay Competition, the Script Pipeline Screenwriting Competition and the Vimeo Awards.
 
Anya Salih
LEAD SCIENTIST
Dr Anya Salih is a research scientist at the Western Sydney University (WSU), Australia. Working underwater on coral reefs of Australia and in the WSU laser confocal bio-imaging Facility that she leads, Anya has been researching the diverse biological functions of fluorescence in nature.
 
Mars Wong
LEAD DEVELOPER
Mars Wong is a VR Game Developer at the Technicolor Experience Center in Los Angeles. Previously, Mars worked on Color The Temple for the Metropolitan Museum of Art and was invited to speak at Carnegie Mellon University on the future of immersive media.