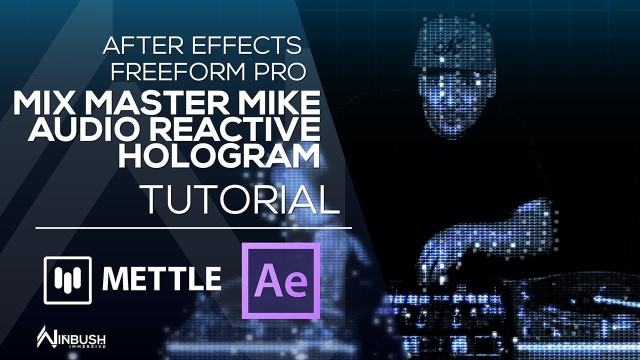 One of the coolest effects in the Award-winning MOONBASE [INVASION ReMix] is a 3D Holographic Avatar of Rock’n Roll Hall of Famer Mix Master Mike, mixing in real time. In this tutorial, Jonathan Winbush (winbush.tv) takes us behind the scenes and shows how he created the audioreactive Hologram. He uses many features found in Adobe After Effects along with FreeForm Pro. Thanks Jonathan and Mix Master Mike!

You can download a free demo of FreeForm Pro and try it out.

Flat footage of Mike shot with a RED camera on Greenscreen, already keyed out.

Desaturate the footage and make it into a Precomp.

An “Audio Amplitude” adjustment layer appears. Now you can drive the FreeForm Pro displacement animation with the audio layer.

FreeForm Pro > Wireframe combined with After Effects “Glow” and “Tritone” for one of the layers in the comp. 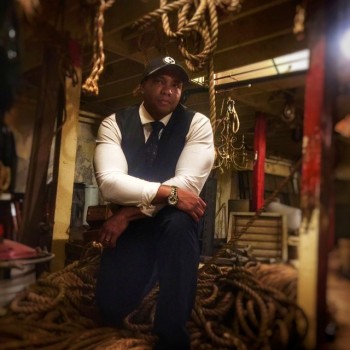 Jonathan Winbush (Winbush Design & Animation Studio) is an international award winning motion graphics artist that now works in VR. Rated as one of the top 25 artist in Hollywood by Inferno Development Jonathan has worked on movies and television shows for studios such as Marvel, DC, Discovery, Warner Bros, Hasbro and many more. Jonathan is also the co-creator of the multi award winning Magma Chamber VR project for Rock’ n Roll Hall of Famer Mix Master Mike of the Beastie Boys.

Named as “the world’s greatest DJ” by USA Today, Mix Master Mike’s status as a premier, award-winning DJ and producer has allowed him to maintain his rank as an influential musician, and become a household name.

2017 has been a whirlwind year for Mix Master Mike, touring stadiums with Metallica, trailblazing the VR world, working on music with the Invisibl Skratch Piklz, DJing A$AP Rocky’s latest album release party, and more. Mike’s Virtual Reality project, “Magma Chamber”, has been winning awards internationally, including the 2017 VR Fest Award for “Best Animated VR Music Video” and two awards from Vega Digital Awards. “Magma Chamber” is being recognized as one of the best and most innovative videos in the VR world. As a result of all the attention “Magma Chamber” has received, Sir Richard Branson extended an invitation for Mix Master Mike to attend the Extreme Tech Challenge awards at the famous Necker Island. His second VR music video, “Moonbase Invasion,” was released to critical acclaim as well, winning honors from Cannes Film Festival, Austin Music Video Festival and Globaltrend Video Awards. Read More.