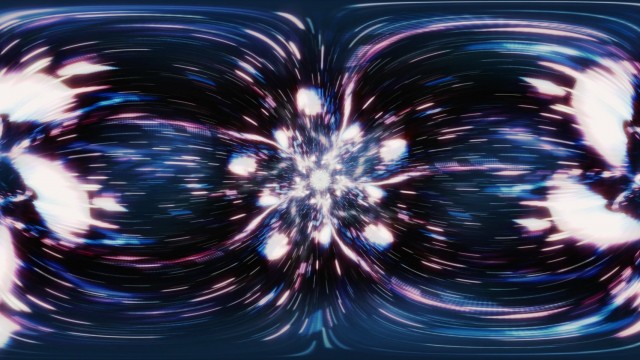 What’s Beyond is a expressive 360/VR animation that takes the viewer through a wormhole and on a fantastic trip through deep space. All the brightly colored scenes and changing patterns were created in After Effects with Element 3D and SkyBox Studio. What makes it even more impressive – it’s the first 360/VR animation by Berkay Ferah, an experienced 2D motion graphics artist.

Says Berkay, “Along with everyone else, I love outer space and its hidden psychedelic undiscovered regions. The goal of this project was to bring us all into the far reaches of outer space through the immersive capabilities of VR. The music is Neptune, The Mystic, from Gustav Holst – The Planets. Even though it was composed 100 years ago, it feels timeless and appropriate for this VR experience.”

The Steam Bus is an amazing initiative by the Columbia Public School District. It’s a traveling VR bus for kids that delivers access to technology that may not be available in a child’s own school. StoryUp VRproduced a 360 video that showcases the Steam Bus in a fun and accessible way. The 360 post-production used a combination of Adobe PhotoShop, Adobe After Effects and SkyBox Studio 360/VR plugin. All the text, graphics, 2D images and GIF were easily composited with 360 footage. You can download a free demo of SkyBox Studio and try it out.

What was the workflow pipeline? Which software and hardware did you use in your production.

I needed to understand how to create for 360 before beginning the project. I am an experienced 2D motion graphics artist, but this was my first foray into 360 production. So I researched how to produce 360 videos in After Effects and found Mettle SkyBox Studio. I also researched how to view the finished video with virtual reality glasses. Then I began my 360 production, and focused on the art direction to create space and a black hole. I kept it abstract, so I could be free to imagine and create in another dimension.

I used Adobe After Effects with the help of Skybox Studio, Trapcode and Element 3D. My computer is a 2013 macbook retina. I have to admit the render time took longer than I wanted, because I was rendering to 4k resolution with a weak GPU on my computer. 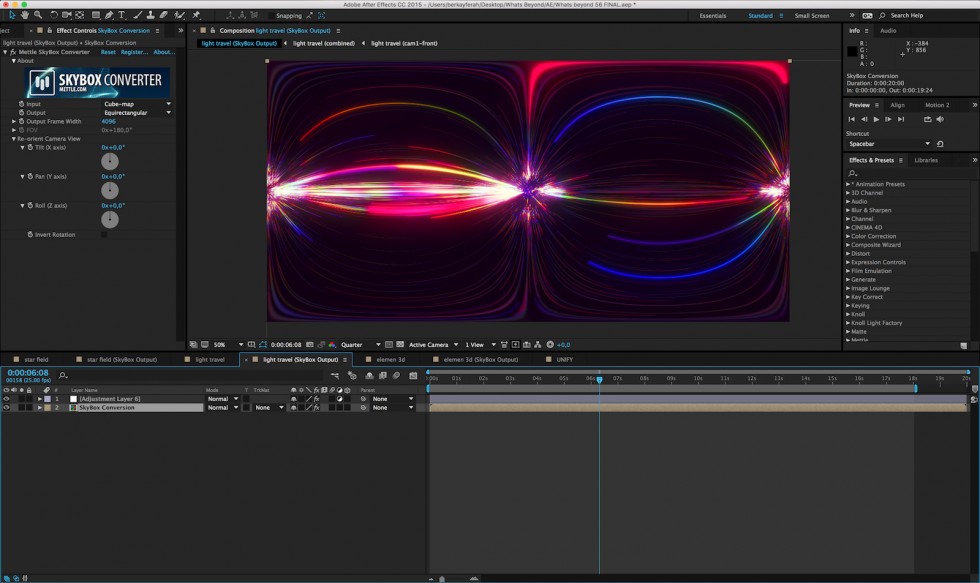 360/VR Production in Adobe After Effects with SkyBox Studio.

How did you get started in VR creation?

I have been interested in VR for a very long time, ever since I tried my friend’s DK1.  It opens a new window of experience for the creator and the viewer.

How did you select the audio?

The music is Gustav Holst – Neptune, The Mystic from The Planets, which I have in my music library. Neptune is my favorite track, because it sounds the most mysterious, like its name. I researched different versions of the track until I found Mike Leghorn’s cover.

What is your work/school background.

How did you hear about mettle plugins?

I researched online for a 360 solution in Adobe After Effects, and I found mettle Skybox Studio, the only solution. Thanks to mettle, I was able to create my 360 project. 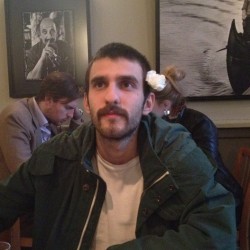 Watch What’s Beyond on Fubiz