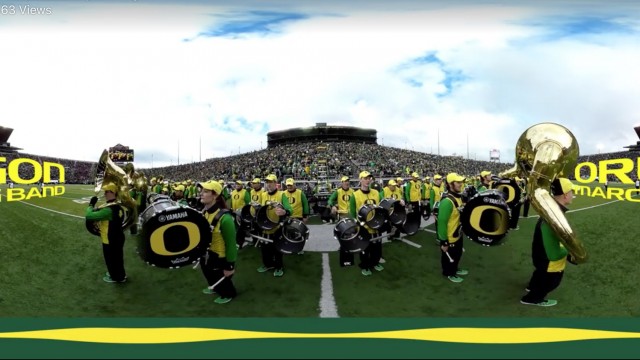 The University of Oregon School of Music and Dance is using 360 video to bring their rich campus life experience to the world. Their small, two-person production team on campus creates a dynamic range of 360 videos, from a larger-than-life 360 Marching Band experience during a football game, to smaller more intimate portraits of what is happening within their Music and Dance school.

Steve Fyffe, part of the production duo with Erin Zysett, is also Director of Communications for the School of Music and Dance. He is enthusiastic about the medium, and sees it as an effective way to show what their school has to offer. Although Steve had 10 years of professional tv production experience, he was by no means a motion graphics artist. He was able to quickly learn 360 production from Mettle tutorials. Their team uses Adobe Creative Cloud along with Mettle 360/VR software in their production pipeline, making it an easy step forward into 360/VR production.

You are using 360 quite extensively at your University. It really presents a vibrant picture of what’s going on. Why did you decide to embrace 360 video so extensively?

We knew that 360-degree video would be a great medium to showcase the Oregon Marching Band, because their performances are such a spectacle. When they play at Autzen football stadium on game day, there’s something to see in every direction, no matter where you look – whether it’s the 250 band members marching in lockstep in front of a packed crowd, or the cheerleaders dancing and throwing aerial stunts on the sidelines. It’s a show that was made for 360-degree video. Fans are used to watching the show from high up in the stands, so to be able to transport them right onto the field at the 50-yard line is a completely unique perspective that only a handful of people with VIP access ever got to see before now.

Our 360-degree video of the band playing a medley of Jimi Hendrix classics at halftime has been a hit for us on social media. It got more than 40,000 views on Facebook in a week, making it our most popular video over the last three years. It also got picked up and shared by a publication that closely covers the college marching band scene. They wrote on their Facebook page that it was “by far one of the coolest things we have ever shared here on this page” and encouraged their followers to share it as well so that other fans could “experience what it’s like to march in a college band in a whole new way.”

Who does your productions? Do you have a studio on-campus? How does your team work together – please give us a description of your workflow.

Our small, two-person communications team (made up of myself and my colleague Erin Zysett) produces our 360-degree videos in collaboration with our in-house audio engineer Lance Miller. Being a school of music, we strongly believe in director George Lucas’ famous quote that “sound is fifty percent of the movie going experience,” so we try to capture the best stereo audio we can using high-quality Neumann KM 184 or Schoeps CMC 6/MK 21 microphones. When we’re recording at off-site locations, we use either a Zoom H4N or F8 field recorder, depending on the number of microphones we need to deploy.

When we recorded the halftime show, we had a very limited time to set up. As soon as the football teams cleared the field, we only had a couple of minutes to get our cameras into position on the 50-yard line, while at the same time another person was raising up our stereo mic pair to the top of a tall stand in an area that had been packed with football players and coaches just seconds before. I’ve spent years working as an investigative TV news producer, where time was of the essence and the cardinal sin was to miss the shot. But even so, it was a pulse pounding moment. 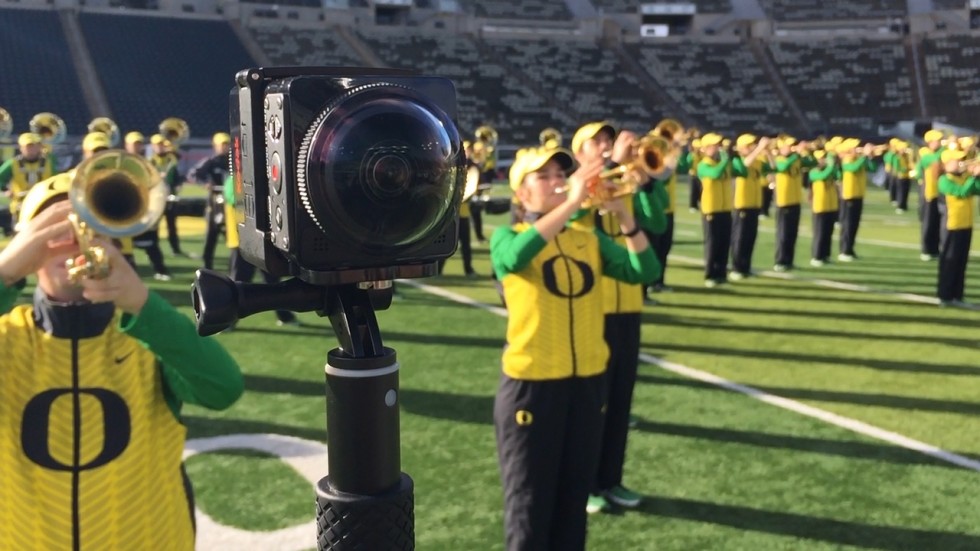 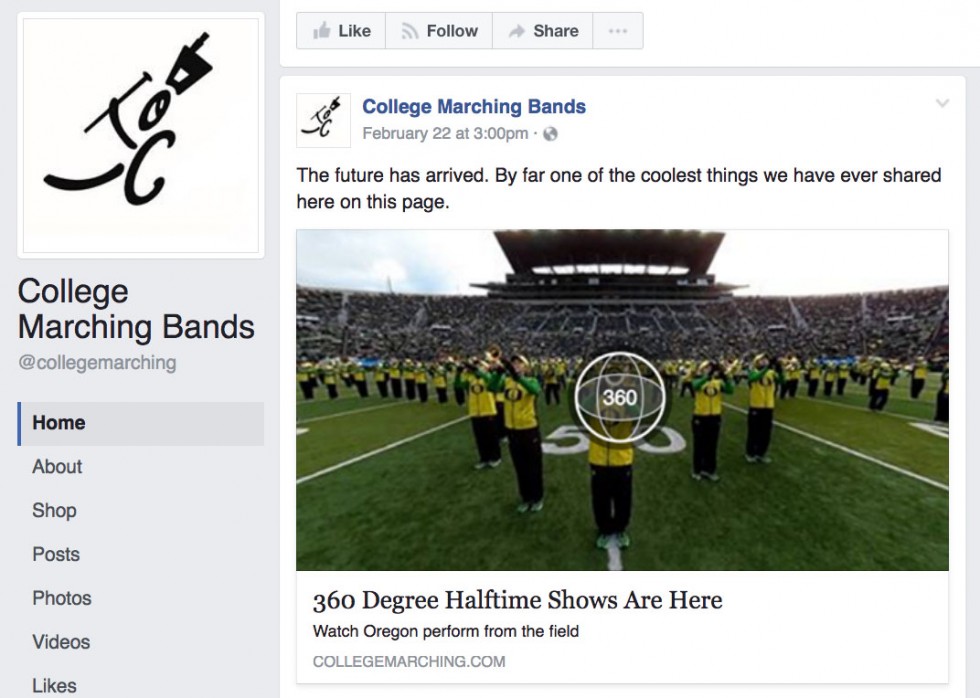 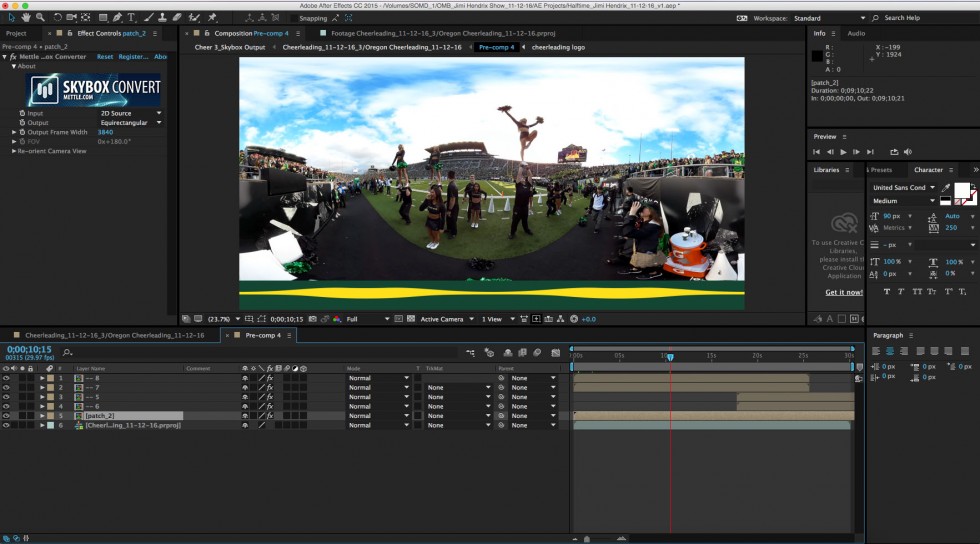 What kind of hardware/software do you use?

We shoot our 360-degree videos with a pair of Kodak PIXPRO SP360 4K Action Cameras, and use the stitching software that comes with the camera. We edit on a new MacBook Pro with solid state memory. We do a basic edit and sync up the sound in Adobe Premiere Pro, then we roundtrip to Adobe After Effects, where we add the titles, credits and other motion graphics using Mettle Skybox Studio. 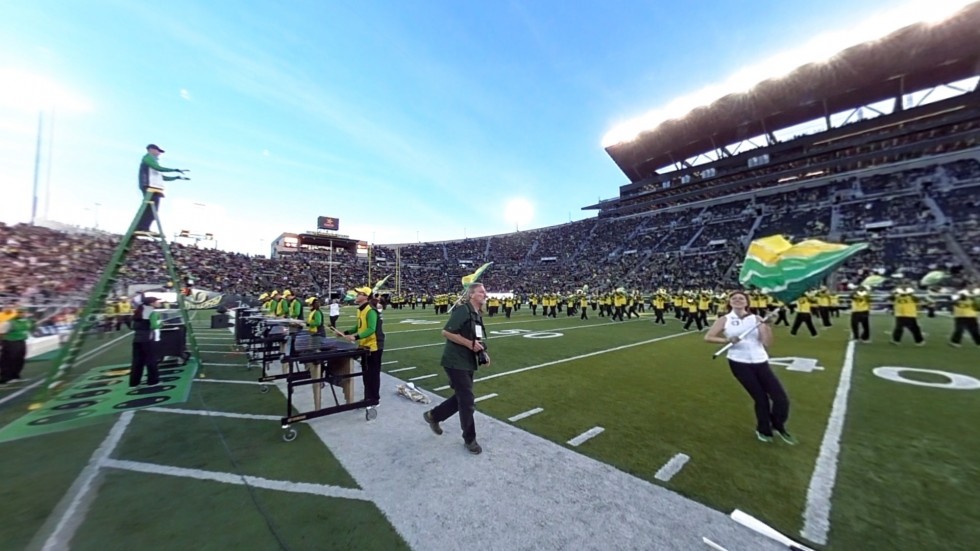 I love using Mettle’s Skybox Studio. We’re a small shop, so we have to do just about everything on our own, from production to post to promotion. I’ve been a professional TV and video producer for more than a decade, but I’m by no means a motion graphic artist, which is why I was so happy when a colleague turned me on to Skybox Studio. It allowed me to create simple but stylish titles that instantly elevated the production value of our videos. All I had to do was watch a 10-minute online tutorial video and I was ready to go.

In addition to the opening titles and end credits, Skybox Studio also allowed us to create a cool picture-in-picture effect. One of the best things about watching the Oregon Marching Band perform is the constantly changing formations the band members make as they march across the field. So we put a camera high up in the stands to capture a bird’s-eye view, then we used Skybox Studio to create a kind of “digital jumbotron” that would allow viewers to see all those beautiful patterns at the same time as they were getting an eye-level view of the band from down on the field.

I’ve also been impressed with the customer support from Mettle. Whenever I’ve emailed them a question so far, they’ve got back to me with an answer or a solution within a few hours. 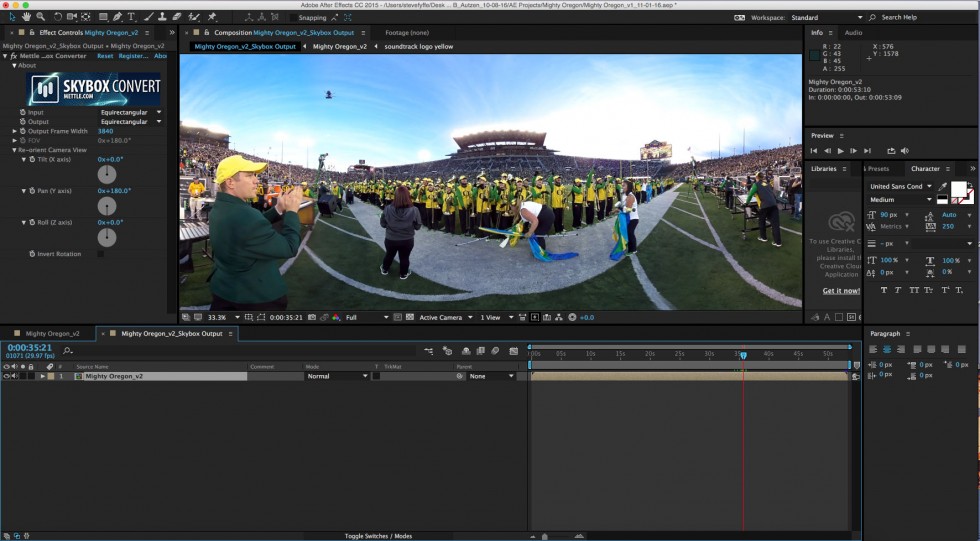 What challenges/possibilities do you encounter with 360 production?

360-degree video presents some unique challenges, and I think filmmakers are still figuring out how to use the medium. You can’t rely on traditional lighting or editing techniques, so you really have to choose your primary shots carefully. In many ways, I think 360-degree video is at a stage in its evolution that’s similar to the moment in the late 1800s when the Lumière brothers showed their film of a train arriving at a station and audiences screamed and ducked for cover. Right now, it’s about showing people something they’ve never seen before, and hopefully eliciting a very visceral, gut-level response. If history is any guide, that approach will slowly give way to narrative-driven storytelling, but filmmakers are still learning how to effectively tell a story in 360-degrees.

Here at the University of Oregon School of Music and Dance, we’re looking forward to producing more 360-degree videos so we can share more amazing performances from our faculty and students. It’s a wonderful way to transport audiences up on stage with our award-winning chamber choir, jazz ensemble and orchestral groups, or put them right into the middle of a modern dance performance. Listening to music and watching dance can be such a powerful, emotional experience, and the immersive nature of 360-degree video makes it the perfect medium to let people from all over the world become part of those unforgettable moments.

Erin Zysett is the Communications Editor for the University of Oregon School of Music & Dance. Prior to that, Zysett spent five years as the program coordinator and cultural exhibits gallery curator for the Salem Multicultural Institute and World Beat Festival in Salem, Oregon. She has also worked as a community reporter and photographer at the Polk County Itemizer-Observer, in Dallas, Oregon, where she won the 2008 Oregon Newspaper Publishers Award for Excellence in Feature Writing. She has a BA Journalism and Communications, Video Production, University of Oregon, an MS 2016, Arts Management, Media Management, University of Oregon and aMaster’s Certificate in New Media and Culture.