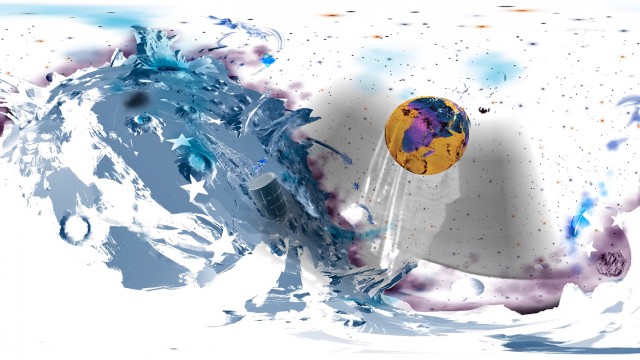 SPACED OUT was the most talked about immersive experience in the New Frontier Program at Sundance Film Festival 2020. The Verge called it “the most unusual experience at Sundance 2020”. No Film School reviewed it as one of the innovations pushing Extended Reality forward. CNET, “Unlike sex, VR is crazy better when you do it underwater”. Loosley inspired by Georges Meliés “A Trip to the Moon“, creator Pierre Pyaré Friquet pushes the boundaries of immersive experiences by placing viewers in a swimming pool with an underwater VR headset and snorkel.

Key to the experience is the revolutionary VR waterproof headset, DiVR by Ballast Technologies. It transports the viewer into the weightlessness of space travel, and helps you leave your body behind, to reach the moon and then its hollow center. A voice over narrative from the Apollo 11 mission ties together the combination of CG, actual NASA images and trippy editing effects. We’re proud to have been part of the 360° production process, with Adobe After Effects and Premiere Pro immersive tools and Mettle Mantra.

We caught up with Pierre during the Festival. He graciously took the time from his busy schedule to have a chat.

Mettle: Congratulations! How are you feeling right now? Spaced Out has been getting lots of attention. All of it positive!

Pierre: It is overwhelming. I can’t find the words. And gratifying. So many people have been here to try the experience, and the feedback has been great.

M: How did you come up with the idea?

P: I had worked with Ando Shah on other projects, and when he co-founded Ballast VR, the company which made the underwater VR headsets, I wanted to explore the possibilities of that medium. Aquatic VR is a great way to view VR. There is no motion sickness in water, since the inner ear doesn’t work in water. There is no nausea. Spaced Out is a 3DoF experience, but it feels 6DoF in the water. It also solves the real estate problem of VR. There are many pools, so therefore many places to view VR.

I had a residency in Switzerland at the World VR Forum, that supported my project.  I consider myself a film painter, exploring lucid dreaming. The Apollo 11 moon landing and space exploration was my starting point. I wanted the piece to be anchored in reality by using the audio from Apollo 11. Spaced Out explores that first walk, the joy of reaching unattainable places delivered by VR.

M: You have produced several VR experiences already. What knowledge did you apply to this project?

P: The camera movements had to be organic, and the comfort of the viewer was important. Working in water, that was new. Tiny differences in the temperature of the water have an effect, and we had to be aware of the vulnerability of the viewer. We have to put on a bathing suit, get in a pool and breathe through a snorkel. We used proprietary software for the audio. It was bone-conducting, not through headset. Sound travels five times faster in water than in air, so the sound feels immersive and surrounds you. Being in a pool makes people feel weightless and simulates the feeling of no gravity in space. Once the experience is over and people take off the headset, they feel the gravity of earth again.

M: A large part of the experience is CG, but parts of it were done in Adobe After Effects and Premiere Pro using Mantra VR.

P: For part of the experience, I used actual 2D images from Apollo 11 and brought them into 360° with the Immersive Tools in Adobe After Effects and Premiere Pro. Mantra was a good bridge between the images and what I wanted to get stylistically. The effects are subtle but make a big difference. I couldn’t have had the results without it. The Mobius effect worked really well for me.

M: Congrats again, and thanks Pierre! 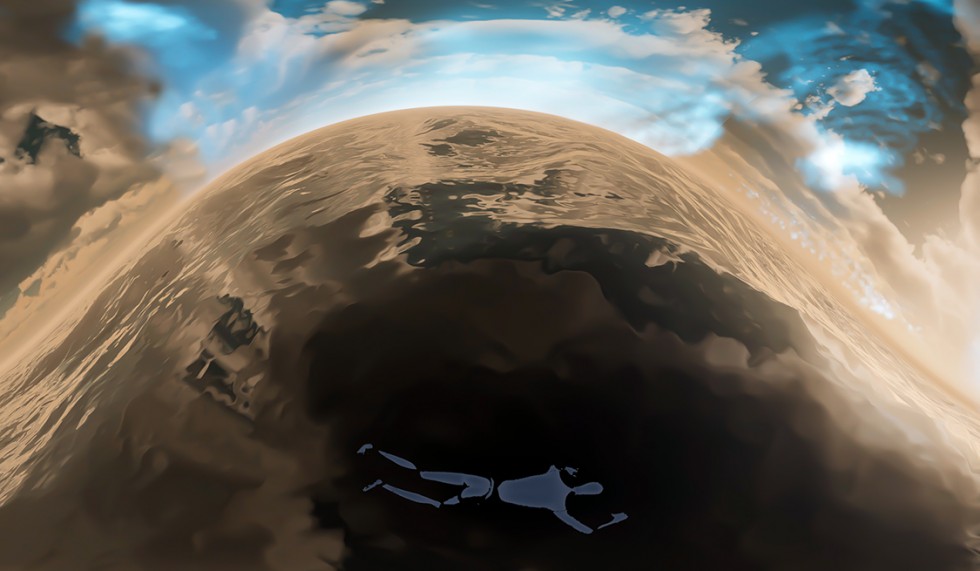 SPACED OUT In The Press

The Verge
Sundance VR AND AR Got Extremely Weird in 2020. Most unusual experience: SPACED OUT.
Why it’s good:Spaced Out marries eerie abstract imagery, like scenes that evoke floating down a giant sci-fi cathedral, with a unique kind of VR system… there’s a real sensory deprivation effect that heightens the intensity. 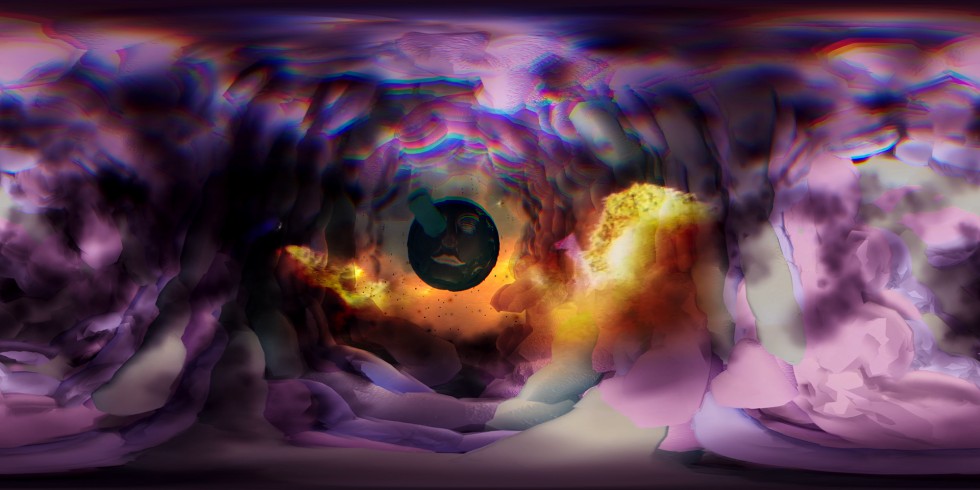 Friquet first imported all the 3D assets, added particles effect, and enhancing materials before creating the virtual camera trajectories and layering the NASA footage. “In order to multiply the richness of the images, I added VFX for the transitions between each shot, and for the stylization of the shots, I used Mantra VR tools for Premiere and After Effects,” he says. For all the editing and compositing he used Adobe Premiere and After Affects as well. – No Film School
Sundance Innovations: Extended Reality Takes A Leap Forward 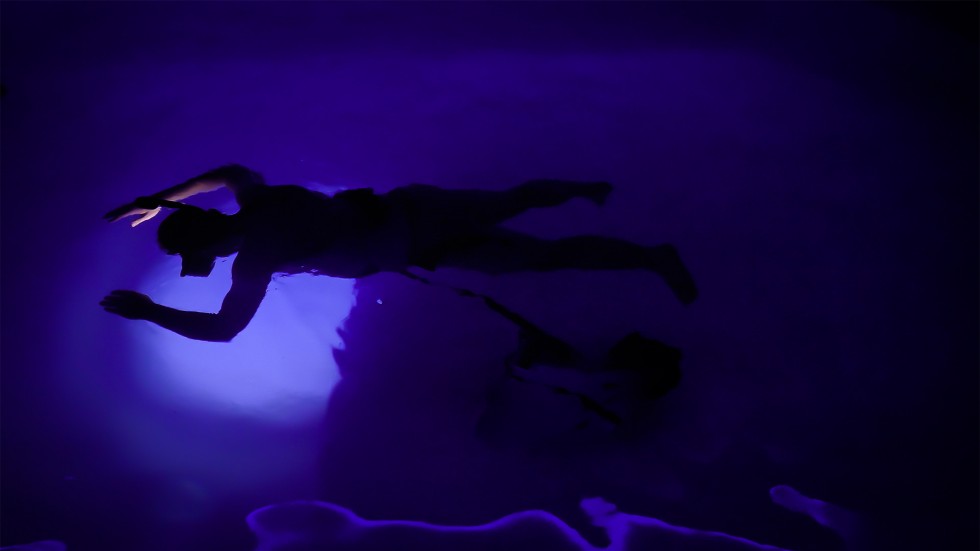 imdb
Spaced Out marries eerie abstract imagery, like scenes that evoke floating down a giant sci-fi cathedral, with a unique kind of VR system… there’s a real sensory deprivation effect that heightens the intensity.

Indiewire
Sundance VR Programming Showcased Much More Than Movies in a Headset
The potential for VR to immerse users in new bodily experiences was especially prevalent in this year’s Sundance lineup. “Spaced Out” uses the first waterproof VR headset that allows users to be submerged in a swimming pool while breathing from a snorkel, playing with the sensations of submersion such as weightlessness to complement the virtual experience of voyaging to the moon.

CNET
Unlike sex, VR is crazy better when you do it underwater.
Virtual reality already plays Jedi mind tricks on your brain, but underwater VR is like a zen Jedi masterstroke. 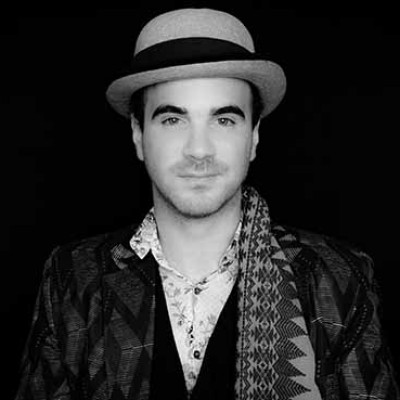 SPACED OUT had its International Premiere in the New Frontier Program at Sundance Film Festival in January 2020. SPACED OUT world premiered in Switzerland at the World XR Forum, where the project had its creative residency.

In SPACED OUT, NASA’s archives will be re-transformed for frame deletion, data recovery, distortion, glossy compression, improper editing, reinterpretation, forced errors. The colors are in negative. White and black stars make up space. The surface of the moon is bright blue, turning the colors of the earth into a strangely familiar air.

Ballast Technologies Inc. is pioneering #AquaticVR, a new type of multi-sensory location based virtual reality, that uses the properties of water to provide the most immersive experiences. Ballast enables a magical combination of elements that leave guests in awe. Find out more at http://ballastvr.com