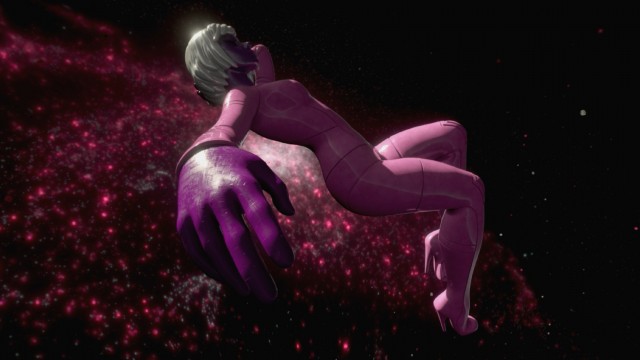 Fafi is an international artist who began her work as pure graffiti, drawing innocent/erotic girls called Fafinettes, and has risen to achieve critical and commercial success. She is one of five influential artists invited to participate in “Vegas: Alter your Reality”, an innovative campaign for the Las Vegas Convention and Visitors Authority (LVCVA). It’s the brainchild of R&R Partners, who are responsible for the famous “What happens in Vegas, stays in Vegas” campaigns..

This was Fafi’s first 360° experience, and Andy Cochrane and John Fragomeni led a team at Sunset West Media to make it happen. They worked from concept, through storyboards and final production. Mettle Mantra VR was used for stylization and effects. The original SkyBox Suite for Adobe After Effects and Premiere Pro, now part of Adobe CC 2018, were used in the post-production. The production pipeline also included Unity and C4D.

Read our earlier profile on “THE SPECTACLE OF VEGAS” by Adhemas Batista | Vegas: Alter Your Reality.

Take a look below for our production Q&A with Andy and John.

Let’s start at the beginning – What was the concept for this short VR film?

Andy: Fafi wanted her film to be an homage to The Fantastic Voyage – a retro-themed journey into the body of a Fafinette (Fafi’s signature character) who has just left Las Vegas, where viewers experience the aftermath of her adventures in the form of microscopic memories coursing through her veins. 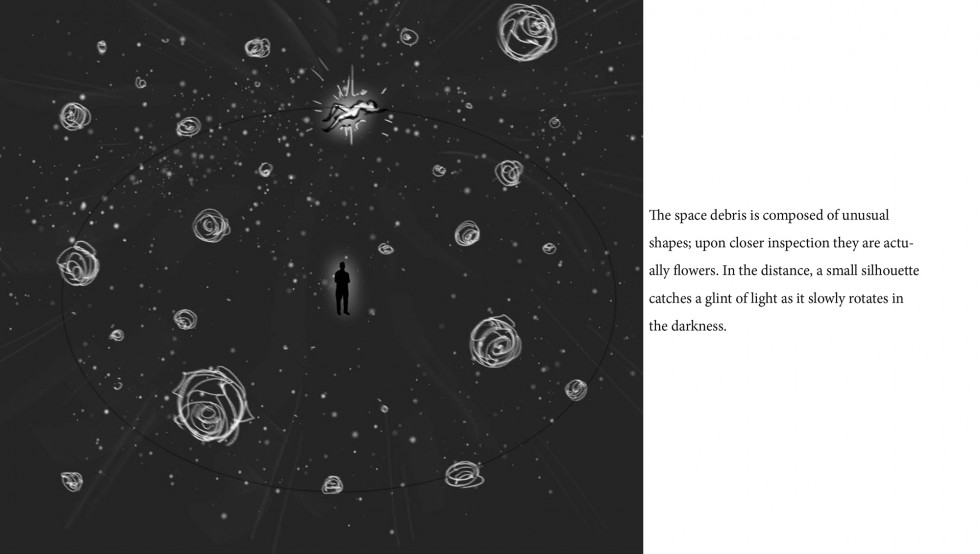 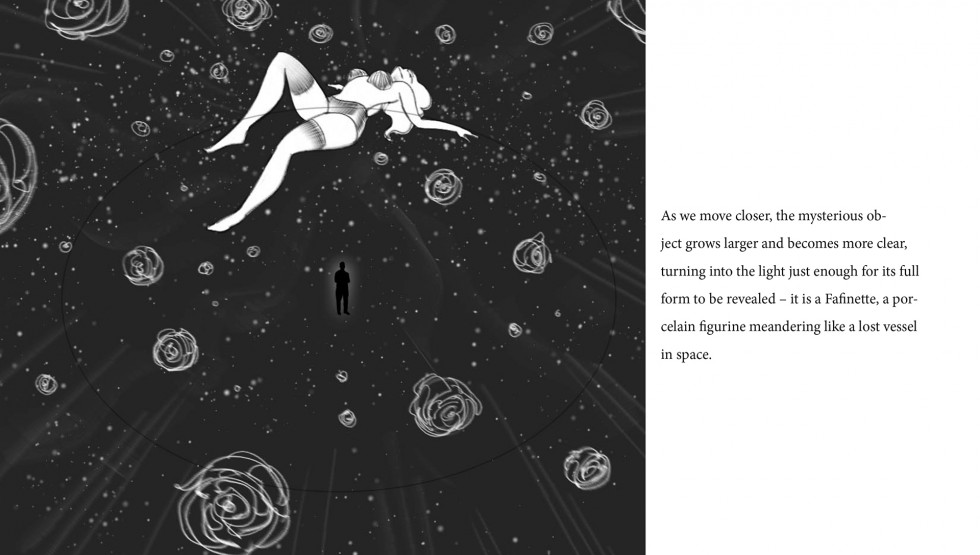 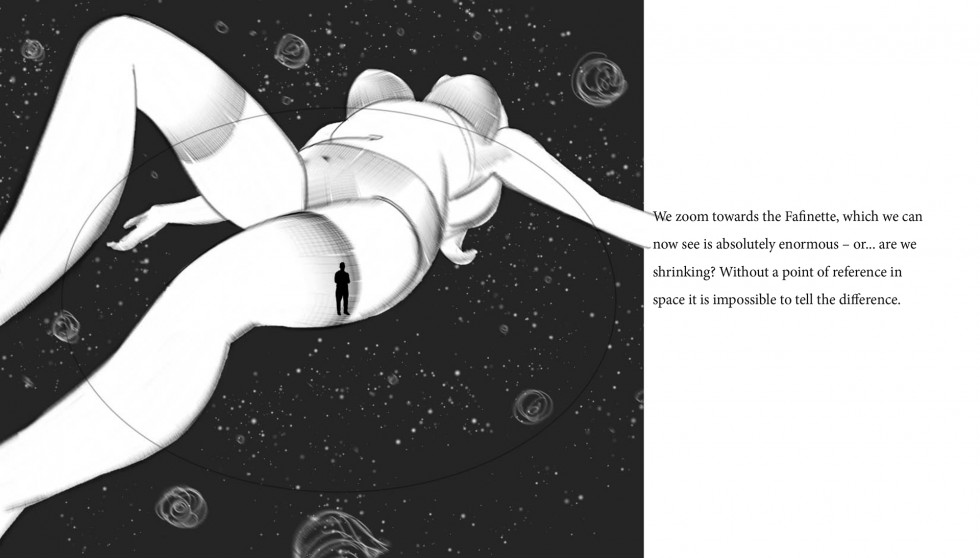 What was it like to work with the artist?

John: Fafi sees the world through a very different lens, and being the only female artist it was a really nice change for the team to collaborate with her to experience Vegas through her eyes. Fafi is very detail oriented – every line she draws and the choices she makes in her use of color gradients and shading is important to the overall aesthetic. Fafi is very particular in how she draws her characters, their size, proportions, colors and styling. She focuses on the shape of the face, eyes, length of legs, expressions, their poses and costumes, all have very specific meaning to her.
Fafi certainly has the most organic process of the five artists. Her aesthetic required a more intuitive and less technical approach to determine how to visualize the things in her head, using the tools at our disposal. We ended up drawing inspiration from her work across several mediums: a line of ceramic fafinettes she designed with M.A.C., her murals that integrate flowers, and her illustration work spanning her entire career. Once we had the basics blocked out, Fafi worked with us directly to set the look and feel for every aspect of the film.

What were her strengths in embracing a new medium?

Andy: Fafi was very sensitive to the physical impacts that VR can have, which gave her an intuitive understanding of how to use the medium to give viewers a desired physical effect. This led to a piece that pushes the envelope in terms of camera movement and environmental animation – she wanted to create a bit of a rollercoaster ride with thrills that capture the sensations she associates with Las Vegas.

Assets were created in Adobe PhotoShop: 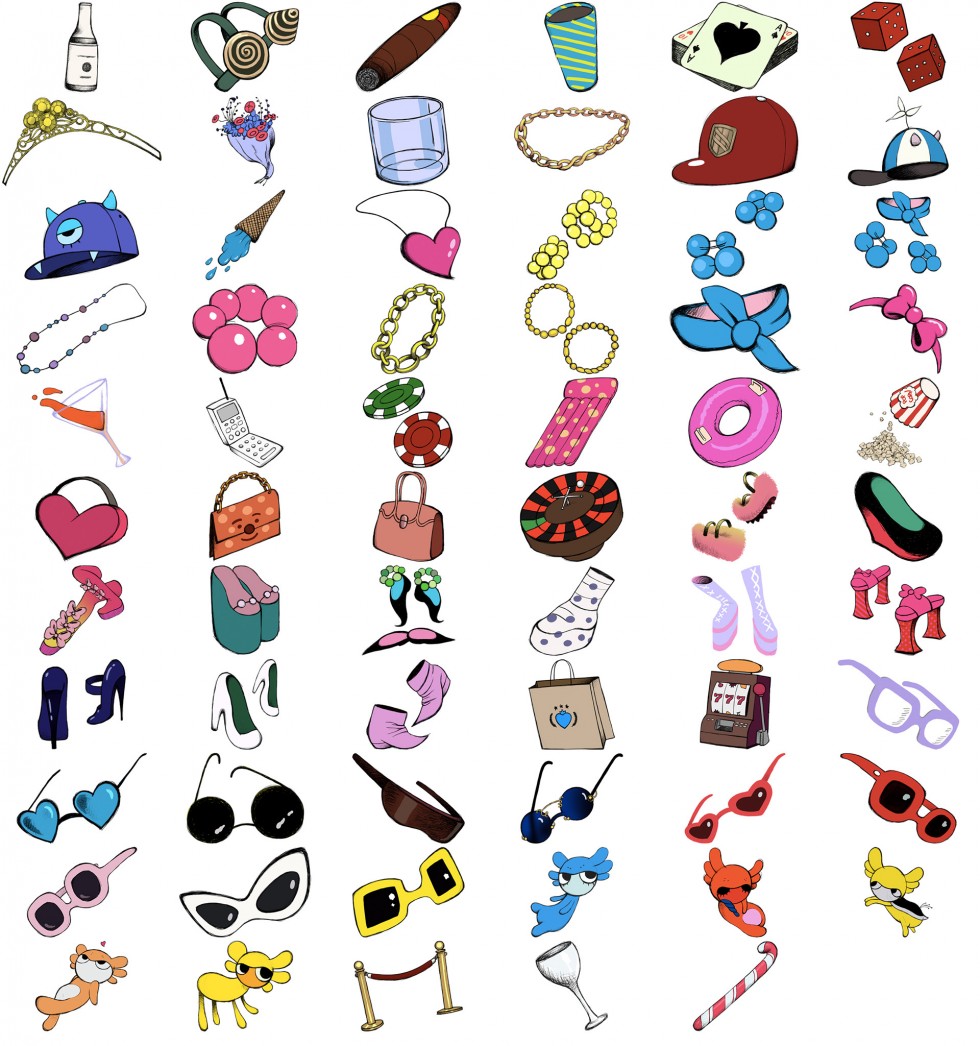 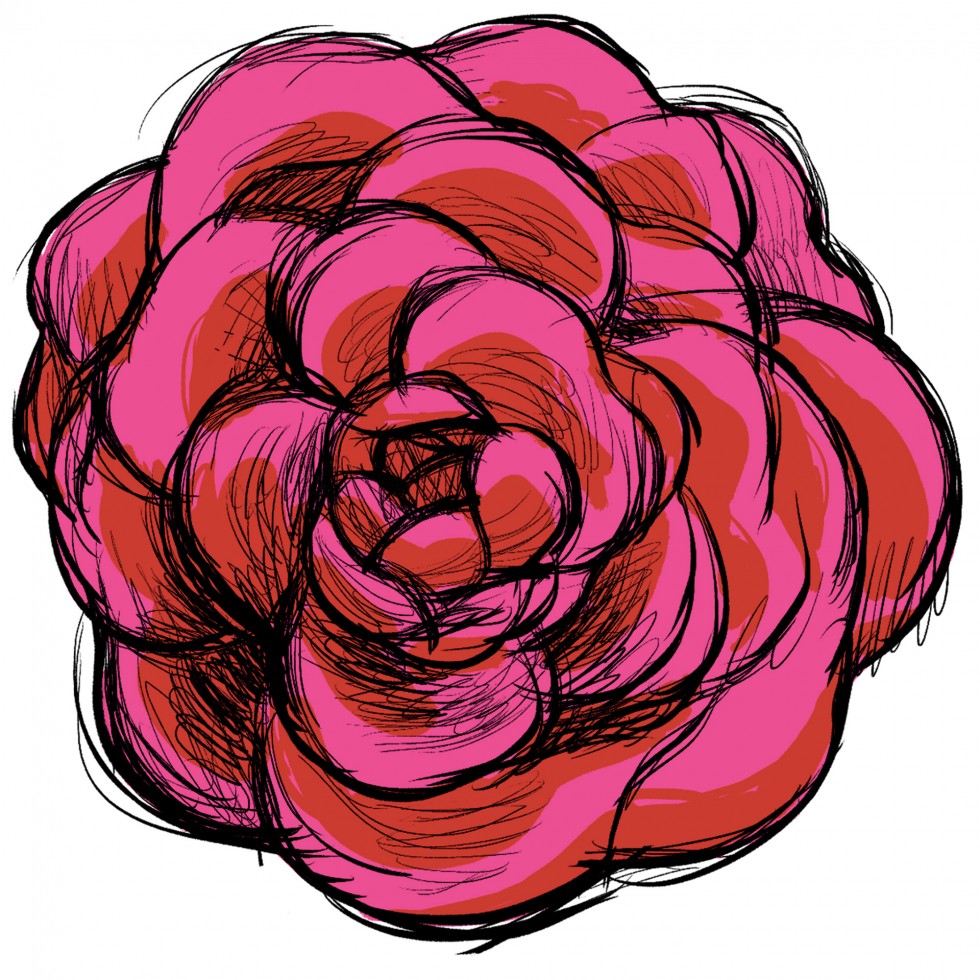 How did you bring flat PhotoShop assets into Stereo 360?

John: Even when she is creating her artwork digitally, Fafi’s style is very analog. She has a handdrawn aesthetic that we had to preserve as closely as possible during the translation from 2D to 360º. Most of the elements in this film started as Photoshop files, broken into layers with the outline strokes and colored fills on their own layers. Some of these elements were extruded and modeled into 3D, but many are seen in the final piece as multiplane illustrations. The galaxy in the beginning of the film is made of millions of instances of 2D flowers that Fafi created in Photoshop, resulting in an effect that feels dimensional but is actually composed of entirely flat elements. We used a similar approach for the neons seen in the first chamber, the Fafinettes in the second, and all of the items seen in the third “buffet room” just before zooming back out into space.

We took Fafi’s PSD files and slightly offset each layer in 3D, creating a look that has a sense of depth due to parallax but retains the original 2D aesthetic. We used Mantra VR’s Turbulence to create the background environments for the flower and buffet chambers, which allowed us to tweak their look quickly in comp vs. having to create and render something from 3D that looked like 2D. We also used the Premiere circular wipe mattes we created for Batista’s film to transition between rooms, as we needed something that would work in stereo to reveal different layers as we moved through and past them. 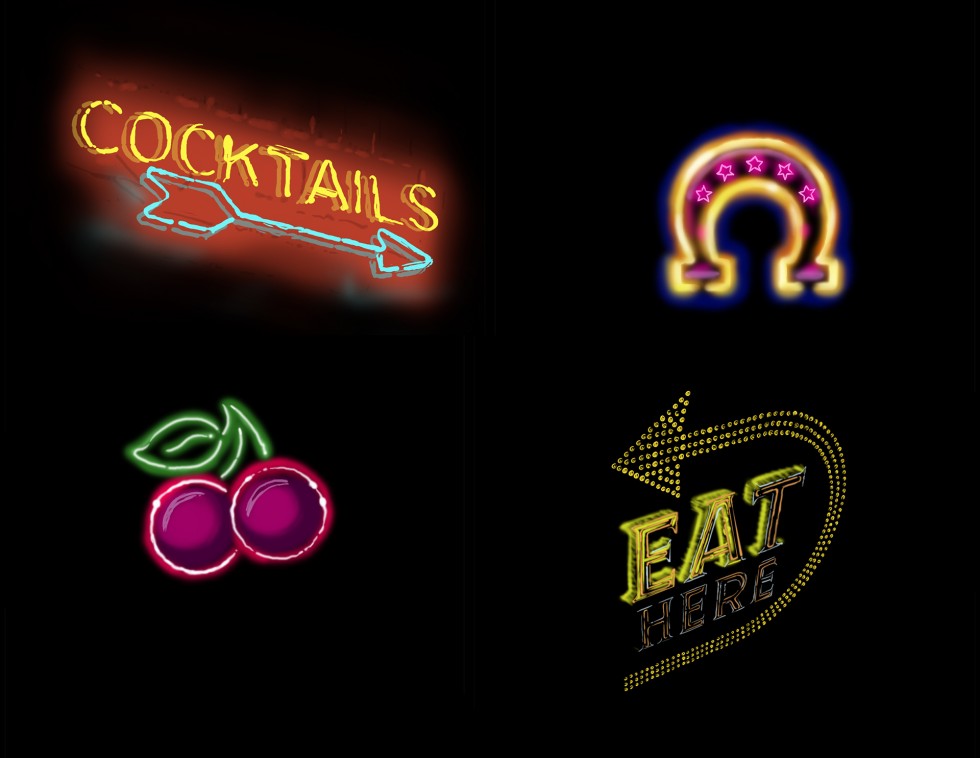 Any discovery that was unique to this project?

Andy: More than any of the other films, Fafi’s piece saw the most creative iteration and contribution from the 3D team. The buffet sequence in particular went through more iterations than we can even remember, with Fafi solving the remaining issues when she came up with the idea to sort the buffet items by color and to form them into the twisted helix that made it into the final. The speed up and zoom blur at the end of this sequence led to a shocking discovery – the Echo effect in After Effects works seamlessly in 360º! We were able to add an exaggerated motion blur look using this old effect, and were even able to amplify it more than we expected to be able to. 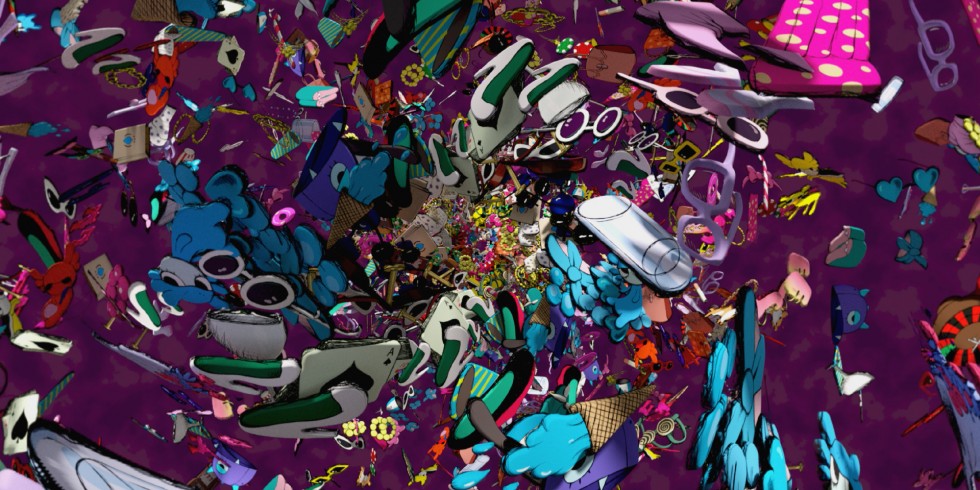 Did you have any new technical challenges?

John: The camera move at the start of this film covers a huge distance and features a handoff between a free camera move and one parented to a slowly rotating 3D model, all during an animation of the interpupillary distance to give a sensation of shrinking for the viewer. The combination of rotations and eye distance animation made for a series of nauseating review >sessions before the move was locked into something that viewers could easily handle. 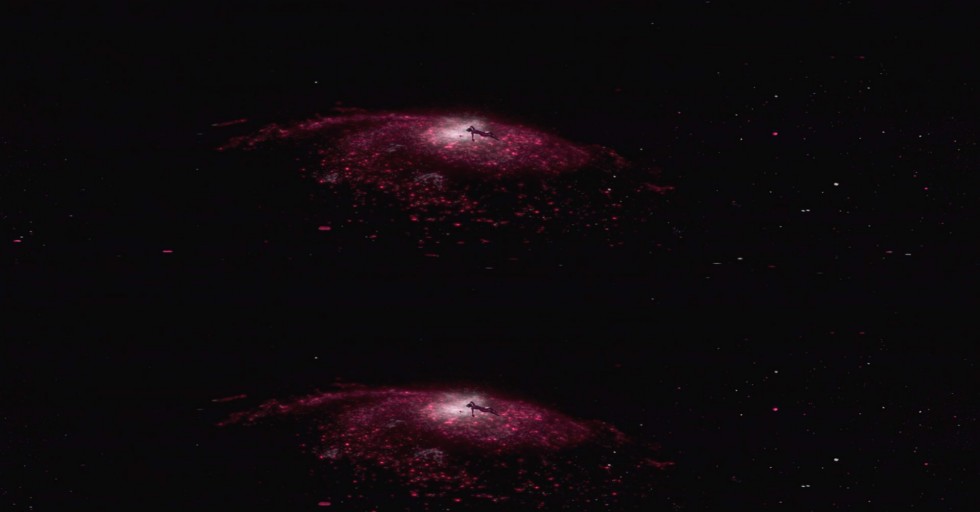 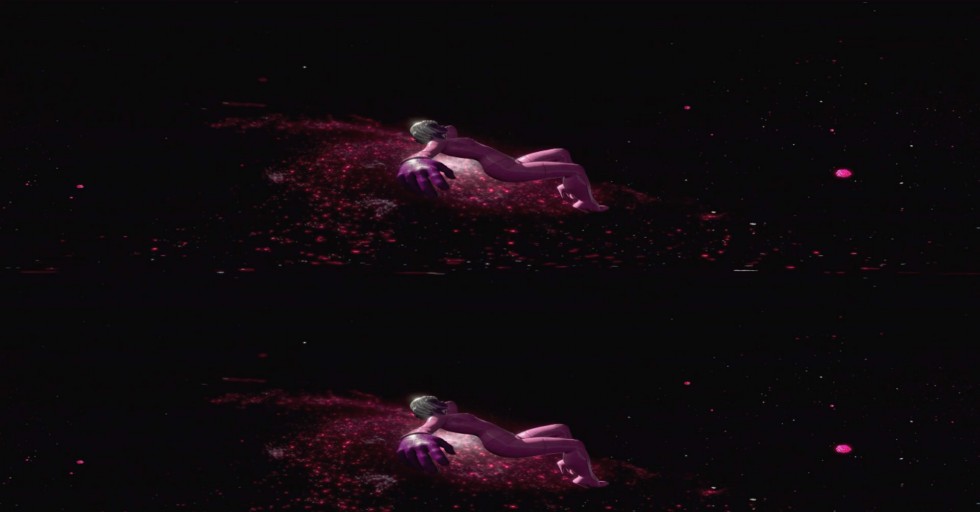 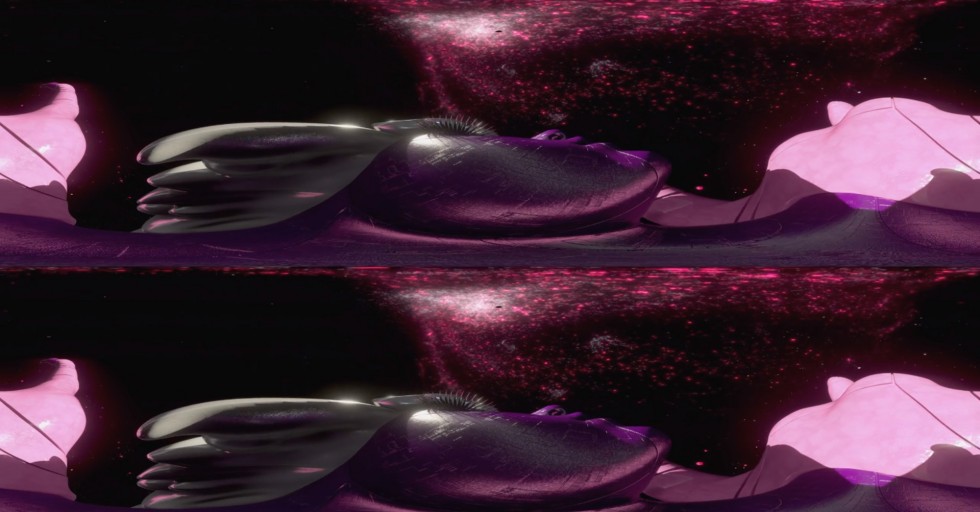 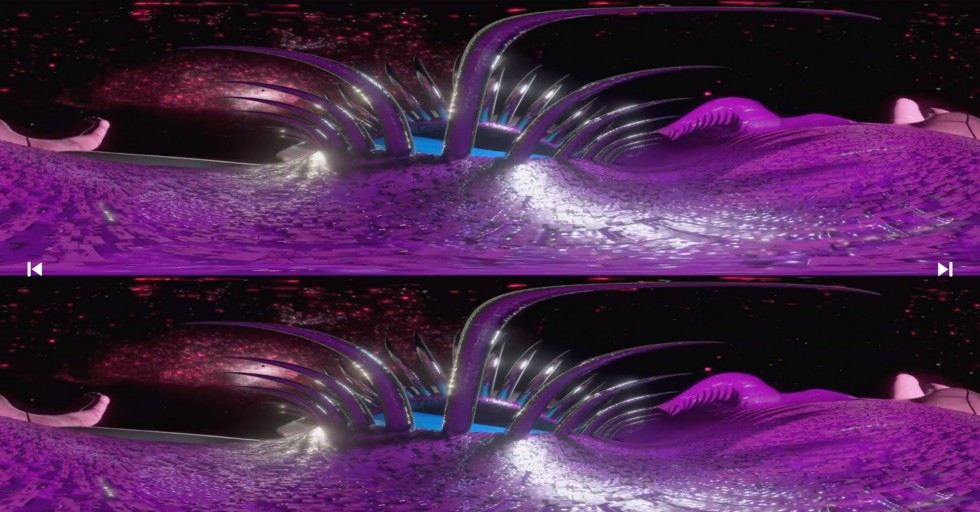 How did FAFI’s original vision of Vegas influence her concept?

Andy: Fafi is based in Paris, but she is no stranger to Las Vegas; her murals have featured in the city’s annual Life is Beautiful art festival and she has visited many times for fun. The one activity she had never done before this project was bungee jumping off The Stratosphere, which inspired the ‘down the rabbit hole’ drop into the Spaceship Fafinette’s eye that kicks off the film’s interior journey.

Mettle: Thank-you for your insight into the project!

Born and raised in Toulouse France, Fafi’s strong presence in the graffiti and fine arts scene was first witnessed on her hometown walls in 1994. Back then, as she was painting and hustling, her sexy, funny, and sometimes aggressive girl characters made the whole world look and help kick-start a whole new graphic language; by exploring feminity through stereotypes, and using it to her advantage, she drew enormous attention and thus started to travel the world with thousands of Fafinettes in her brushes and paint cans. Europe, USA, Japan, Hong-Kong, the planet is a playground.

Soon enough Sony would ask her to design a six-character toy set for the Time Capsules collection, an almost natural move for her three-dimensional measures. Other successful figurines would follow, as well as numerous expositions and collaborations with Colette, Adidas, LeSportSac, Coca-Cola and countless press stories in the most prestigious magazines (ie. Vogue, Elle, The Face, XLR8R, Yen etc…).Her multi-faceted work was all documented in her books GIRLS ROCK and LOVE AND FAFINESS, both being also successful prints in museum libraries and selected shops.