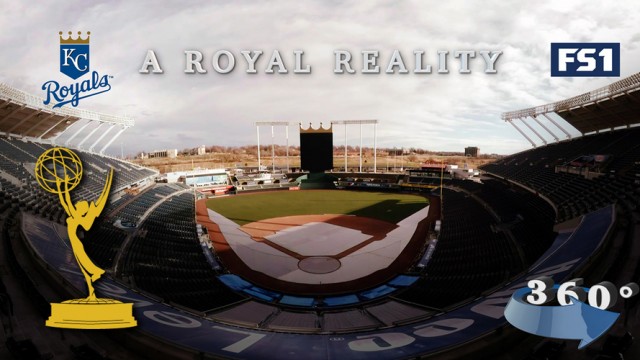 A Royal Reality 360, produced by Fox Sports and PAVR, tells the story of how the Kansas City Royals won the World Series for the first time in 30 years. Winning the Series was an enormous thrill for the fans and the team alike, and Fox Sports and PAVR worked together to produce a documentary in 360 video format. That means it can be viewed as an immersive video on youtube and smart phones, and through an HMD, like Google Cardboard.

The documentary had to use existing photos and video that were shot in traditional 2D format, and integrate them with new footage shot in 360 format, using special camera rigs and technology. On top of that, there was only 2.5 weeks to turn the whole project around. They not only met the deadline, they produced an Emmy-Award winning piece, for Outstanding Digital Innovation. The post-production was made possible using Adobe After Effects and Premiere Pro with SkyBox Studio and SkyBox 360/VR Tools, VR production tools developed specifically for creating and editing this new format.

Goal of the project

For “A Royal Reality” our first and foremost goal was to tell a good story in 360. The Kansas City Royals had won the World Series for the first time in 30 years, the story was there. The challenge was how to do it in a compelling and immersive way that went beyond just capturing a space. We decided to blend 360 footage of the stadium with fan footage and interviews with local fans to create a personal point of view and generate a sense of history and context. Those people and perspectives paired with the immersive capture to help establish a deeper sense of how exciting and meaningful it was for Kansas City to witness the Royals go the distance.It really helped bring an emotional undercurrent to the piece and made it a great story. 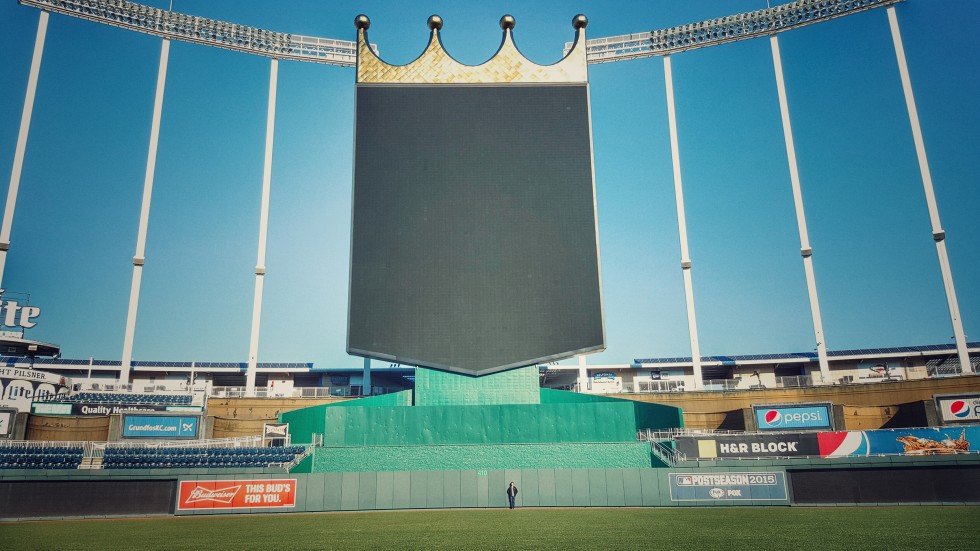 Drone with 360 camera rig flying through the stadium.

The main challenge was our timeline. We ended up turning the whole piece around in 2.5 weeks. We stitched about 60 scenes together and used 70 pieces of fan footage throughout the piece. Our team at Fox Sports (Todd Kapostasy, Jason Sánchez, Mike Hughes) were incredible at helping craft that story and mold the piece. 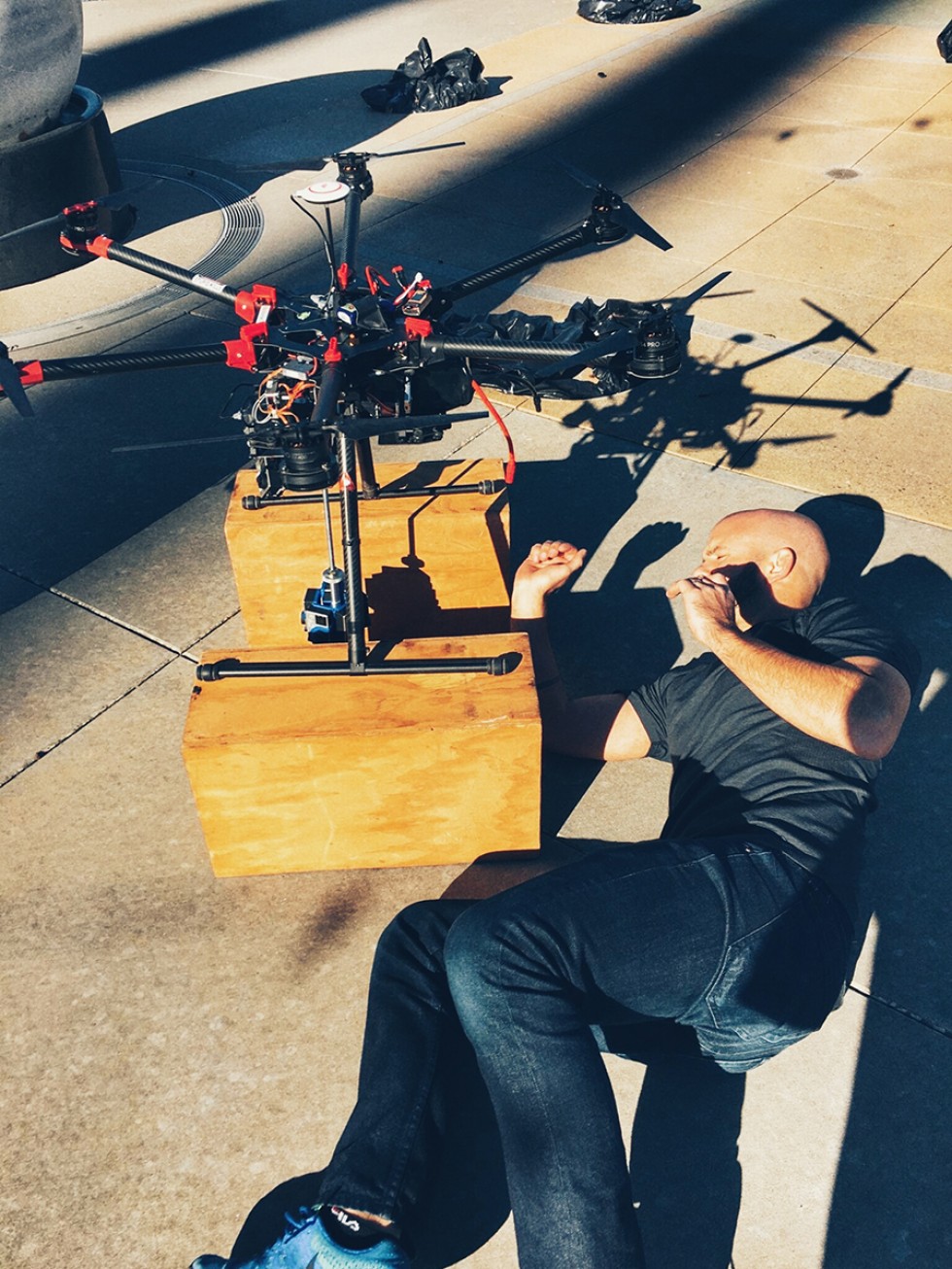 A custom multiple-camera rig on a drone was used for the project. 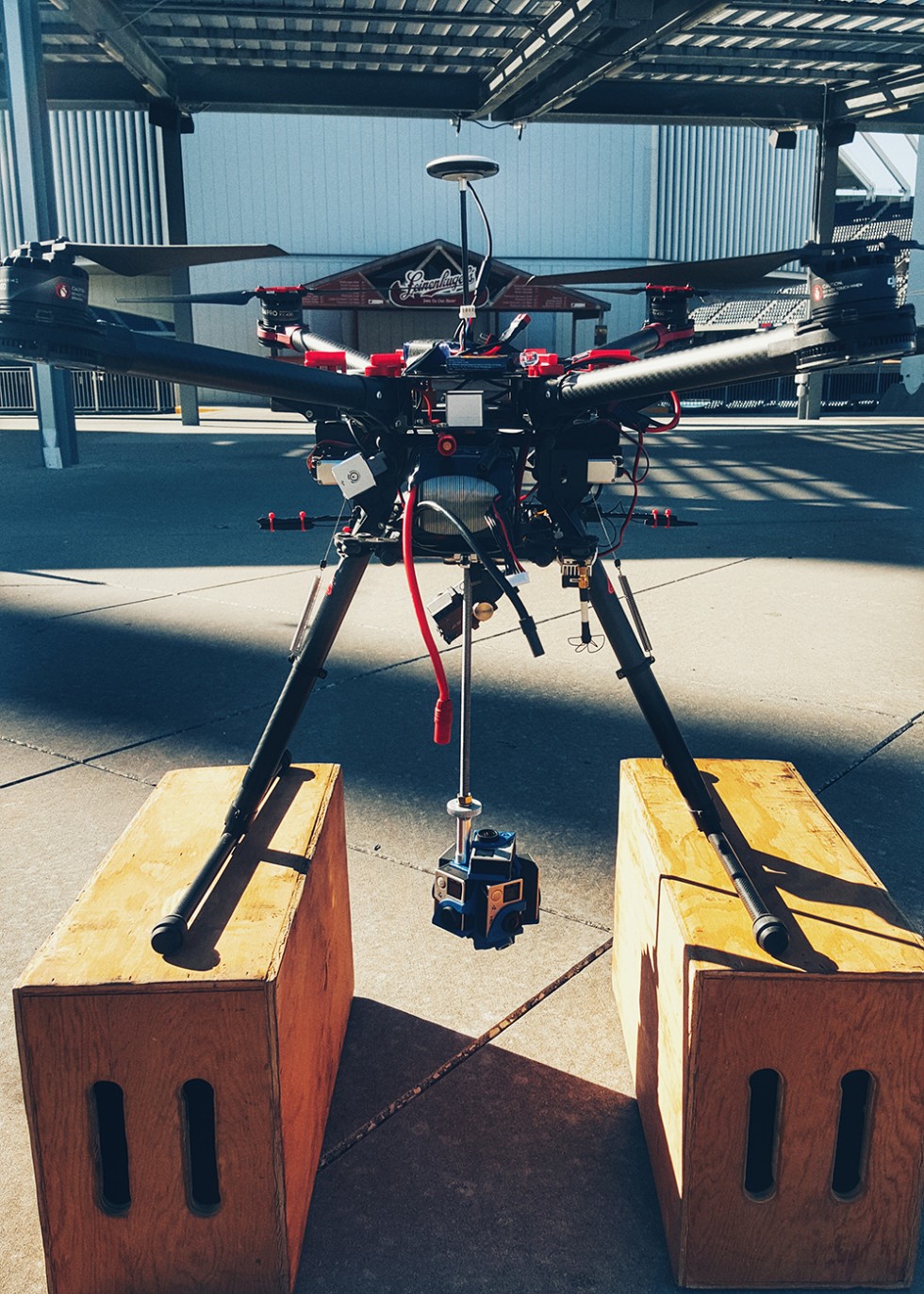 We knew the general story we wanted to tell and like most documentaries you rough out a script and a game plan to get that story. We were lucky to have set up interviews with local fans who had great backgrounds and stories to tell about the Royals and their long wait for a World Series Championship.

Shooting at the Kauffman Stadium was incredible. They gave us full access to the space and we tried to not only capture what it was like for fans to be there but also give an exclusive look to some of the places fans don’t get to go (on the field, flying over the crown, in the locker rooms).

We shot on a custom 360 rig and had minimum crew on set. In some cases we were able to take cover out of sight while also being close enough to give direction and ask questions. In other cases we need to paint out selves out of the shot completely. We also painted out the nadir completely in every shot.

We used Adobe After Effects and Premiere to edit and composite the piece and Kolor APV to stitch. We relied heavily on Mettle’s SkyBox Studio for out titles, fan footage and to remove the nadir in many shots. SkyBox enabled us to bring the quality of the final piece to the next level.

Mettle tools allowed us to have full post production control of the footage and enabled us to insert secondary footage in a way that was quick and precise. A true life safer for the post-production of 360. 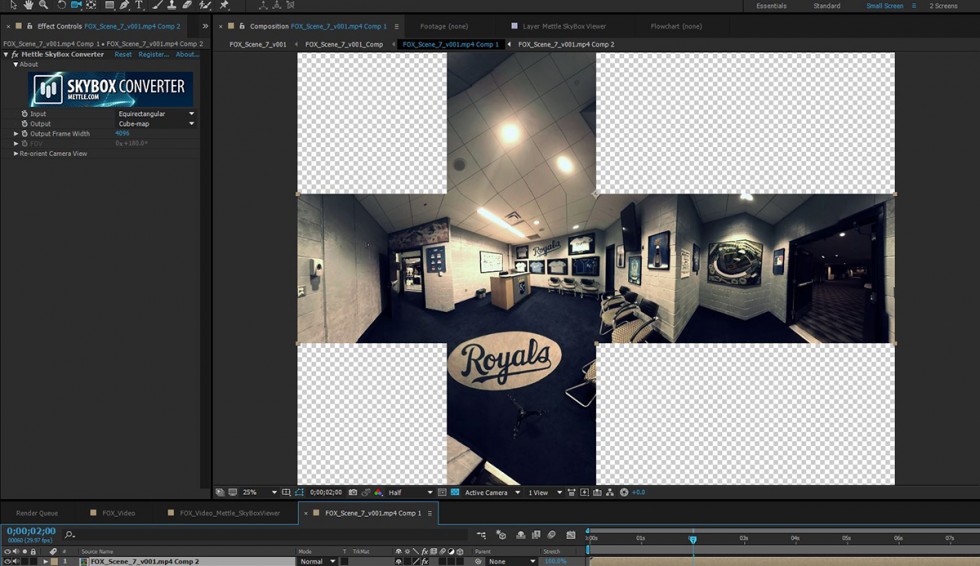 “Stitched”, or assembled footage, is brought into Adobe After Effects, a motion graphics and compositing software. SkyBox Studio plugin give the artists the tools they need to work in 360 format. 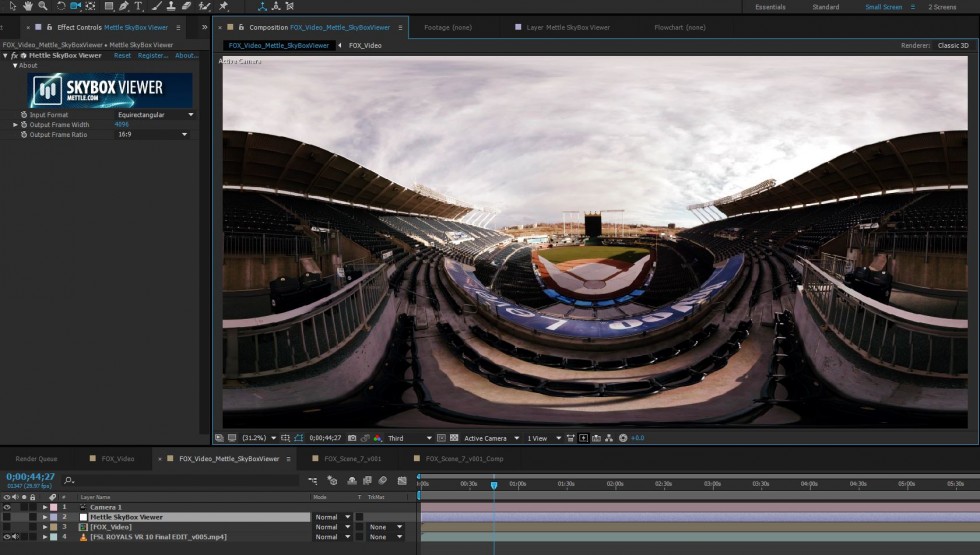 360 footage is cleaned up – the camera and crew are removed, color is corrected, motion is stabilized. 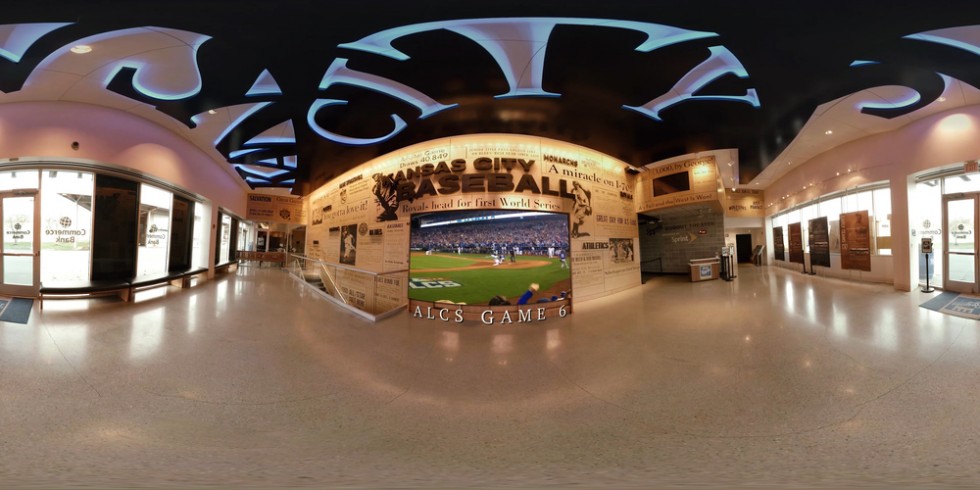 A “flattened” view of the final 360 footage, with text, graphics, and a 2D video integrated into the scene. Camera and crew have been digitally removed from the scene as well.

How PAVR got into VR

Our first short TELEPORTALED was made as an experiment in how to make scripted, immersive entertainment in 360. To our surprise people actually liked it! Off of that we started talking to talent and brands about producing more projects. Our focus has been, just make content, learn the process, experiment and try new things.

We did not expect to be nominated and we definitely did not expect to win. We were thrilled to see that the Emmy’s even recognizes Outstanding Digital Innovation at all. The others nominated are incredible projects to be named alongside. I think its a huge step forward for the industry and we were honored to be a part of it. 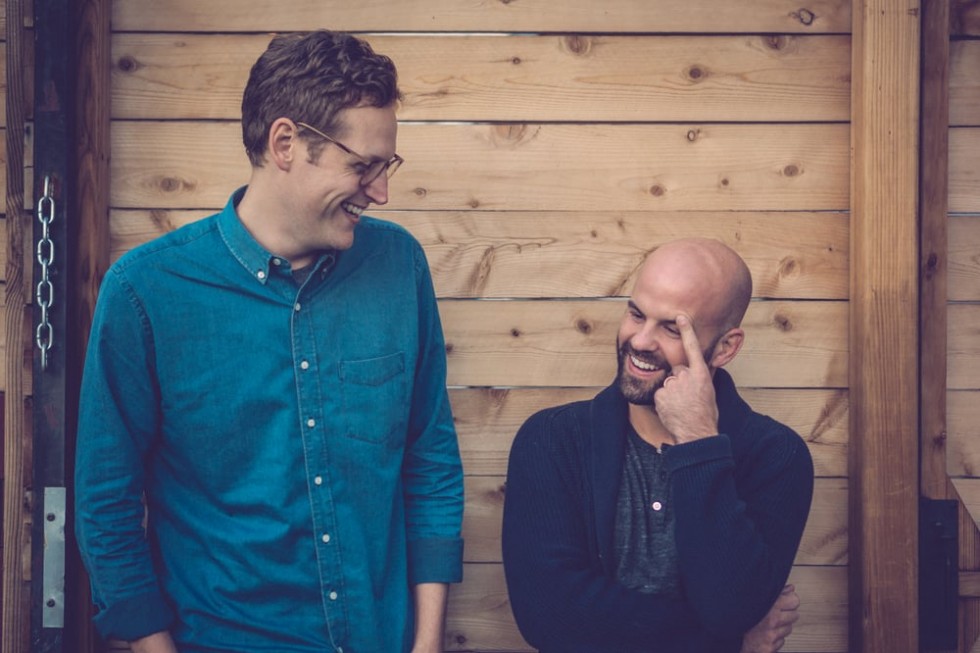 PAVR was started in 2016 by Mike Ashton and Alex Plapinger to produce VR/360 entertainment. They were both working in film and tv and wanted to bring an entertainment/narrative approach to the VR space. Since launching they’ve produced and directed award-winning scripted narrative projects, the first VR stand up comedy series, commercials, music videos, documentaries and animated experiences – all with the goal of making “Popcorn VR” – projects which can be enjoyed and shared by the widest possible audience.

PAVR is currently developing a variety of original cinematic and animated VR series with talent from shows like Always Sunny, Veep, Archer, Bojack Horsemen and more.