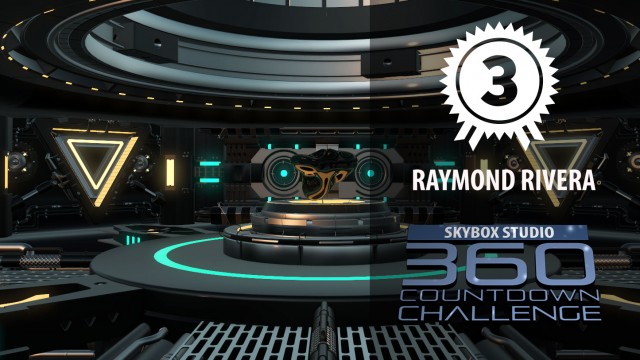 Raymond Rivera (RayGraphics) came 3rd in our SkyBox Studio 360 CountDown Challenge. We take a look at the steps involved in making “Mech Room”, his winning entry. It’s a great futuristic 360 animation created in After Effects with Element 3D + SkyBox Studio.

What is The SkyBox Studio 360 CountDown Challenge. Participants were asked to create a 360 degree video of a numeric countdown. It had to be made using SkyBox Studio in After Effects. Ray won over $2000 in prizes, including Plexus and a Freedom 360 F360 Camera Mount for 6 GoPros.

Ultimately the goal was to guide the viewer on a virtual tour of a futuristic mechanical facility. The viewer starts off in a dark elevator shaft going up to the main entrance corridor. They are met with the series of mechanical doors, which provides access to the main central power room that houses their main power source, antimatter (definitely Star Trek inspired)

I applied the countdown sequence to each door in the corridor as a way to maintain continuity and keep the viewer immersed in my virtual world. The audio was used to create atmosphere and build up to the reveal of the central power room. 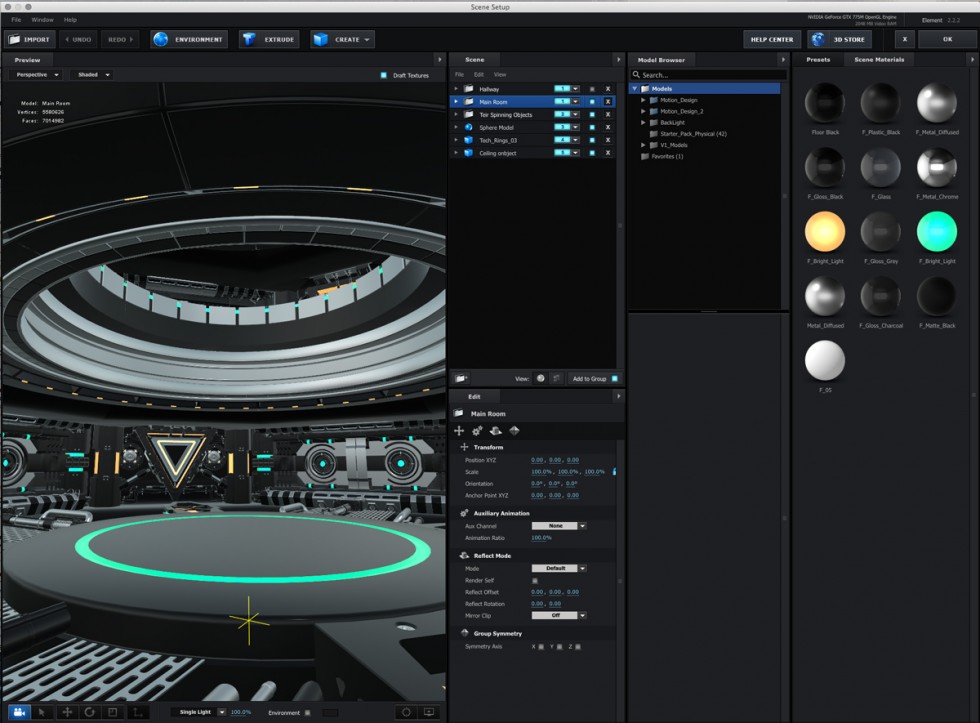 How it was made

I prepared my project file by loading the SkyBox Creator script, checked offed that I am using a 3D plugin and then created a SkyBox Master comp.

With the comp created I then created a solid, which I used to load the Element 3D plugin. I then utilized premade assets to create my actual 3D scene from within Element 3D. 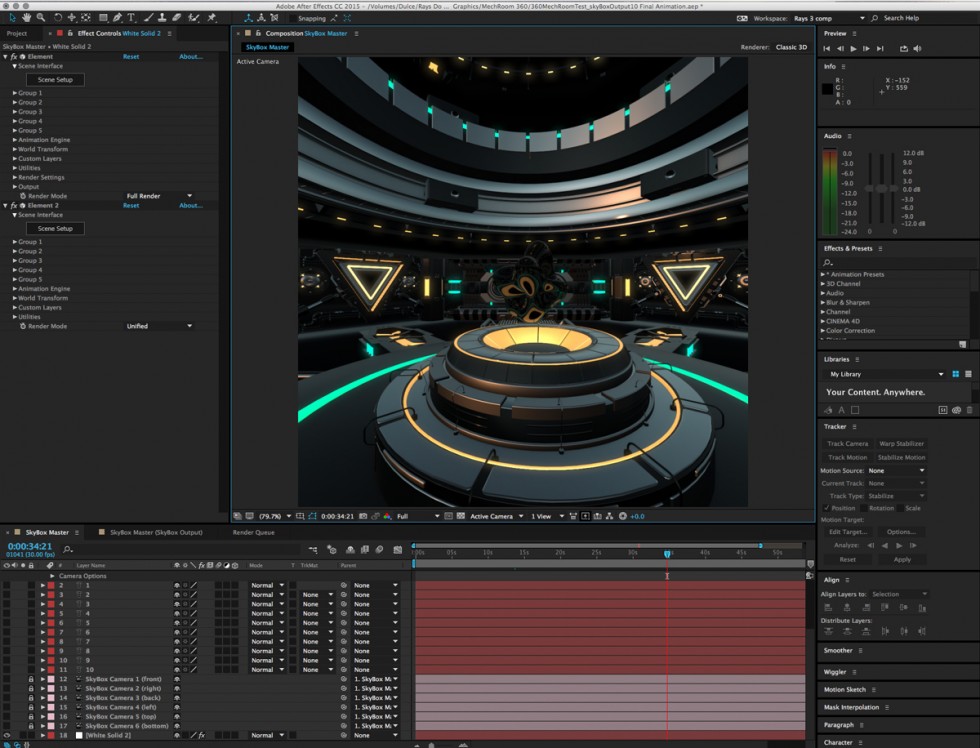 I had to utilized two instances of Element 3D in order to fit the entire scene and enable the use of additional groups for animating. The first Element scene held the main scene with the morphing sphere in the center. All the animated elements within this scene utilized all the available animation groups.

The second Element instance was used for the intro countdown scene. This allowed me the extra animation groups to animate the intro elevator and countdown doors.

In order to render out both instances, the Render Mode of the second instance must be set to Unified. 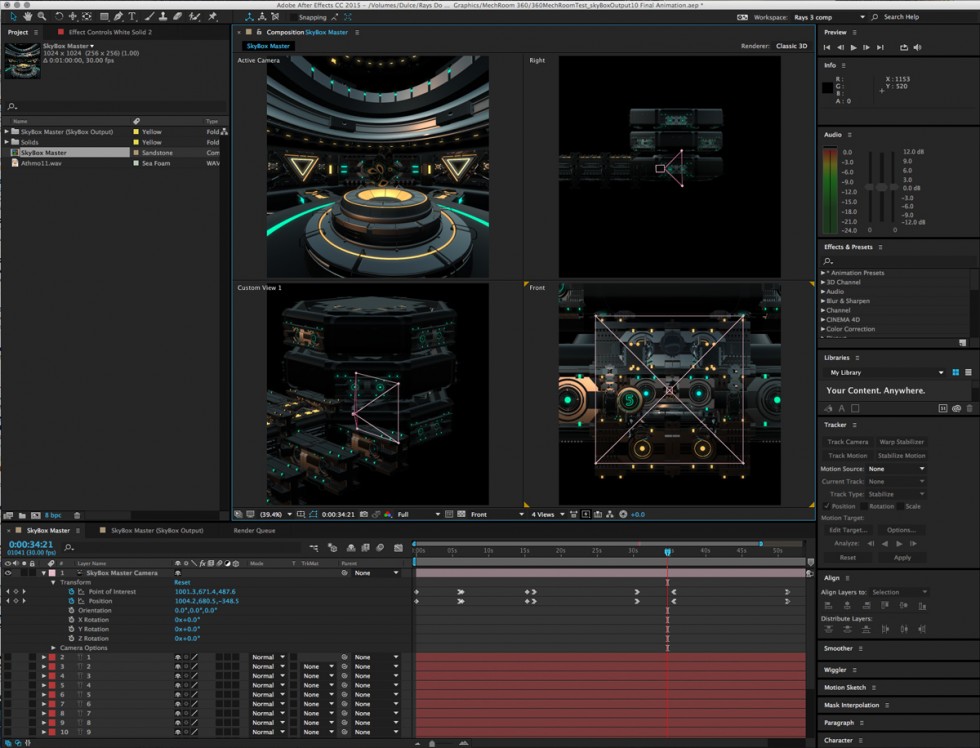 The final output was then generated using the SkyBox Creator script and selecting the SkyBox output comp. I then rendered out my scene from within After Effects as a QuickTime animation. 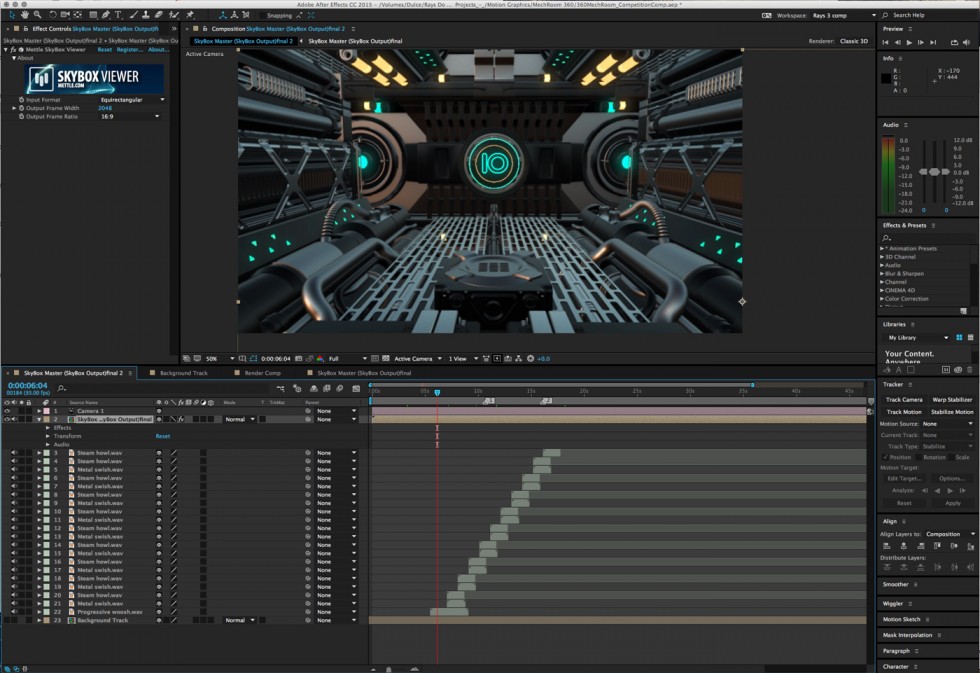 The reason for this was to then bring the rendered scene back into After Effects to apply the audio and color correction. Doing it in this manner allowed me to scrub the scene and test the audio with much more ease since I was not bogging down my computer with the Element 3D Scenes. I utilized the SkyBox Viewer to test view the scene while applying my sound effects.

When happy with final look and audio, I then exported the final comp using Adobe Media Encoder.

Raymond Rivera (RayGraphics) is a MultiMedia Specialist, with a focus on VR.