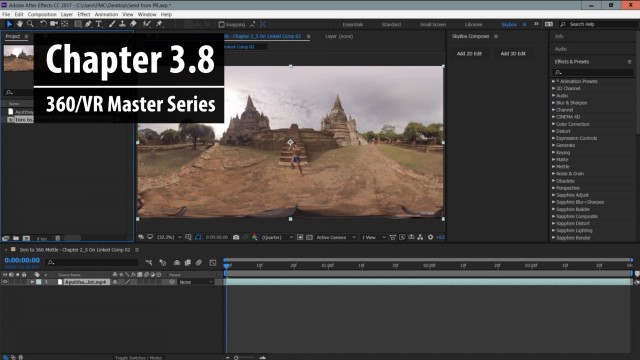 Chapter 3.8: In this video we learn what parts of 360/VR production are best done in After Effects. We see how SkyBox Studio V2 is better for certain tasks like object removal from 360 footage – a camera tripod and drone from 360 footage.

Part of: Master Series: Cinematic 360/VR Production with SkyBox Suite. where you can find links to download free project files and assets to follow along.

You can also go to our Free 360 Video Download Page to find links to Vimeo, where you can download footage.
SkyBox Suite is a comprehensive set of 360/VR production tools for Adobe After Effects and Premiere Pro. They bring 360 production capabilities into those software hosts. The Master Series covers all parts of the post-production pipeline, with downloadable assets to follow along with host Nick Harauz.

Sending 360/VR Clips Over to After Effects