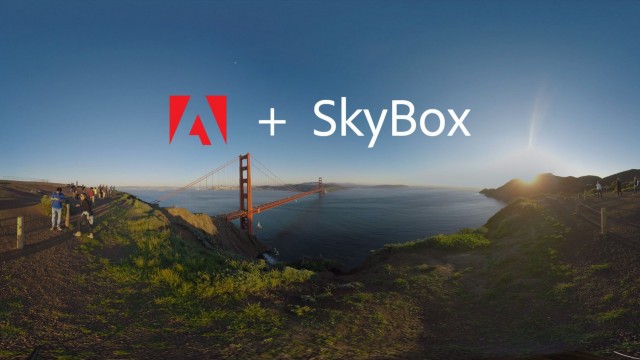 Great News! We are proud to announce that Adobe has acquired Mettle SkyBox 360/VR plugins. The following is a reprint from the Adobe blog: Adobe and Mettle VR: 360 degrees better.

Adobe is at the forefront of 360 and VR production. While our VR workflows take creators from capture to edit to output, our users have been relying on the SkyBox Suite of plug-ins from Mettle for VR transitions, titles, and effects. It made perfect sense for us to make these plug-ins available to our subscribers so that creators of 360/VR content will have a truly seamless, end-to-end workflow.

“We believe that making virtual-reality content should be as easy as possible for creators. The acquisition of SkyBox plugins and Mettle technology allows us to deliver a more highly integrated VR editing and effects experience to the film and video community by the end of the year,” said Bill Roberts, Adobe senior director of professional video product management.

Early experimenters of 360/VR tested the waters in Adobe Premiere Pro CC and After Effects CC. We got to know this vibrant community of content pioneers and one name consistently came up: Mettle. Their collection of SkyBox plug-ins was designed exclusively for post-production in Premiere Pro and After Effects, complementing Adobe’s 360/VR cinematic production technology.

“I am honored to be working with the team at Adobe. I look forward to contributing to the team efforts, moving forward with new tools in immersive media,” said Chris Bobotis, co-founder of Mettle and now director, professional video for Adobe.

An acquisition for smoother transitions

Making it easier to create great work is what Adobe is all about. The latest improvements in our existing 360/VR tools in Premiere Pro include VR video mode, which allows editors to use pan and tilt controls to preview the experience from the viewer perspective. Auto-aware VR in Premiere Pro automatically detects and applies the correct settings for different types of VR. Using Destination Publishing, exported 360/VR is automatically optimized with metadata for targeted 360/VR platforms like YouTube and Facebook. And we recently released support for Ambisonic audio — allowing users to bring multi-channel audio into their virtual reality experiences. The addition of this amazing collection of SkyBox plug-ins widens our scope. Now polished VR productions with smooth transitions will be easily attainable through integrated workflows in Premiere Pro and After Effects.

The time is right

More and more creators are experimenting with the powerful, immersive medium of 360/VR, from media publications and brands to entertainment companies, independent filmmakers, and online creators. That’s why Adobe is increasing our investment with acquisitions like the SkyBox Suite and in new 360/VR technology like 6DOF from Facebook/Mettle. Check out how VR City used the Skybox technologies.

Expect to see some amazing technology by the end of the year, including the Skybox tools you know and love, deeply integrated in Premiere Pro and After Effects. Current Adobe Creative Cloud paid subscribers can get access to the plug-ins by sending an email to dvaplugin@adobe.com. Include your Adobe ID and first and last name as it appears on your account. We’ll get back to you within a week.

Existing SkyBox customers will continue to have the same contact and support process through Mettle (www.mettle.com/support). While SkyBox plug-ins will no longer be available for purchase during the integration process, Adobe will work to create a seamless integration for Creative Cloud subscribers by providing uninterrupted service and customer support during the transition.

BIG NEWS! Mettle SkyBox Suite has been acquired by Adobe.

Author: Meagan Keane is the senior product marketing manager for Adobe Premiere Pro and Adobe Prelude, and the marketing lead for social across all video products at Adobe. In her past life Meagan was a documentary filmmaker with producing credits including We Live in Public, Defining Beauty: Miss.Wheelchair America, and Join Us. Meagan loves Halloween; her past costumes have included (but are not limited to): Jesse Pinkman, Strawberry Shortcake, Jesus Quintana, Skeletor and Sally from the Nightmare Before Christmas.