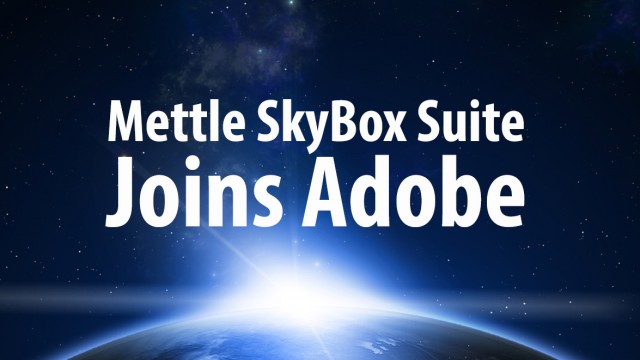 We are very proud to announce that Adobe has acquired SkyBox Suite*. We believe this is a winning scenario for our customers, Adobe, and Mettle, in a move that will advance and further democratize the 360/VR medium. Our plugins have been recognized as best-in-class by Adobe and 360/VR content creators worldwide, making the SkyBox Suite a logical addition to the Adobe Creative Cloud offering. This means that complete 360/VR production workflows will be available to all Adobe customers who hold subscriptions for After Effects, Premiere Pro or the full Creative Cloud, by the end of the year.  A huge thank-you to everyone who has bought our plugins. Kudos to all the 360° pioneers.

What Does This Mean for Mettle SkyBox Customers?

Your project files should work in Adobe CC 2018 with the new Immersive tools, formerly SkyBox plugins.

What Does This Mean for Mettle?

Adobe is acquiring the SkyBox Suite of 360/VR plugins, which are designed exclusively for post-production in Adobe Premiere Pro and Adobe After Effects. Additionally, Chris Bobotis, co-founder of Mettle, is joining Adobe as a Director, Immersive. Mettle will continue as an independent company with a mission to develop innovative software tools for content creators. Nancy Eperjesy, co-founder of Mettle continues as CEO.

Adobe and Mettle are committed to create a seamless integration for Creative Cloud subscribers by providing uninterrupted service and customer support during the transition.

FreeForm, FreeForm Pro and ShapeShifter AE, After Effects 3D plugins that are 360 compatible, are still available and now have a lower price tag.